A high level delegation from the UN Strategic Assessment Mission (UNSAM), visited MERI for a briefing on the latest political developments in Iraq and Kurdistan Region.  The purpose of the Mission, as explained by Darko Mocibob, Deputy Director, MEWAD/DPA, was to elicit views on the work of the United Nations in Iraq, as envisioned by MERI, which will then form part of overall recommendations to be submitted to the UN Secretary General in order to extend UNAMI’s mandate in the UN Security Council in July 2015. Also, included in the delegation were Mario Buil-Merce, Political Affairs Officer, Geeta Kuttiparambil, UN Women, Genevieve Boutin, Chief, Humanitarian Policy Section, UNICEF, and Xiaohui Wu, Political Affairs Officer, MEWAD/DPA amongst others.

MERI President, Professor Dlawer Ala’Aldeen, invoked the necessary role that the UN can play in both Baghdad and Erbil in order to consolidate the process of nation-building and democracy in Iraq as a whole. The UN can also play a decisive role in conflict resolution and proffering advice on constitutional laws and issues. Another area where the UN role can be pivotal is to help support efforts of the civil society and boost the sovereignty of law.

MERI President was of the opinion that Iraq was going through a transitional phase which required novel strategies in order to deal with underlying structural weaknesses. In this regard, the UN could play an important role in bridging gaps, institute confidence building measures between local actors and harmonizing its activities to coincide with current geopolitical realities where borders are becoming irrelevant and propensity of non-state actors to impose their will and terror on others is increasing. 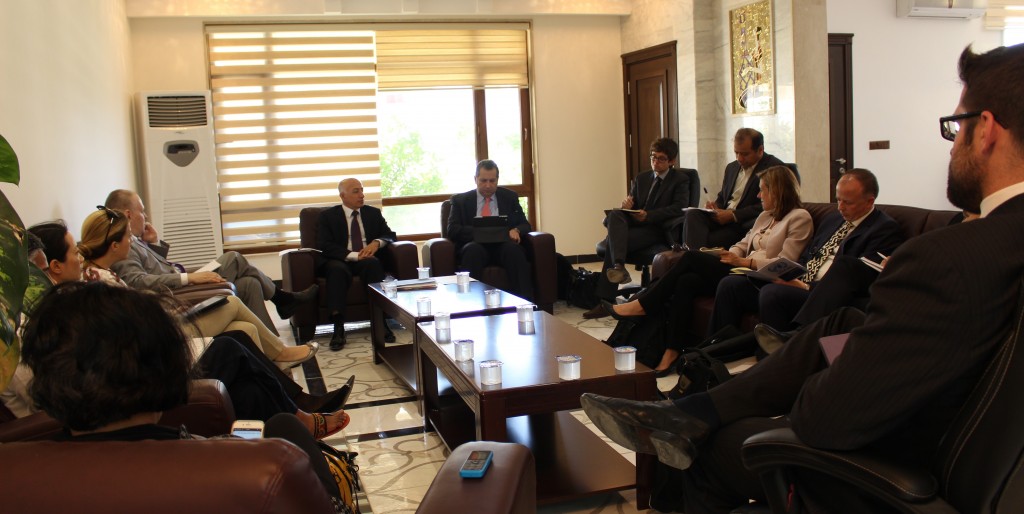 It is imperative then that the UN should move forward with a comprehensive strategy amalgamating a top-down approach and combining it with a bottom-up approach. Not only political elites at the top but local actors need to be engaged in finding solutions that are tailored to the needs and wants of particular geographical areas and localities.

The essential task then is to eradicate the underlying sources of tensions and engage with local communities in ways that addresses their core concerns and grievances. MERI President expressed his conformity with UN efforts to find ways and means for peaceful resolution of conflicts, nation-building, strengthening of democracy and power-sharing and the engendering of an empowered civil society in Iraq.

MERI President appreciated the work of the UN and apprised the delegation of MERI’s good relations with UN offices and representatives through its work on violence against women, human rights, sovereignty of law, refugees and IDPs.