MERI staff continued their research into the ongoing and dynamic security situation by travelling to the frontline in Kirkuk. Staff from the International Politics and National Security Programme took the opportunity to conduct first-hand research of frontline conditions.

MERI has launched a research into the institutionalisation and unification of Kurdistan’s Peshmerga forces and the trip was utilised to expand the Institute’s expertise on the subject. The project will analyse political, organisational and economic aspects and factors surrounding the issue of unification. MERI believes that such an initiative can help strengthen the security and stability of the KRI and Iraq against any elements of violent extremism, such as the Islamic State and it will also contribute to the further deepening of the process of nation-building and democratisation in the KRI. 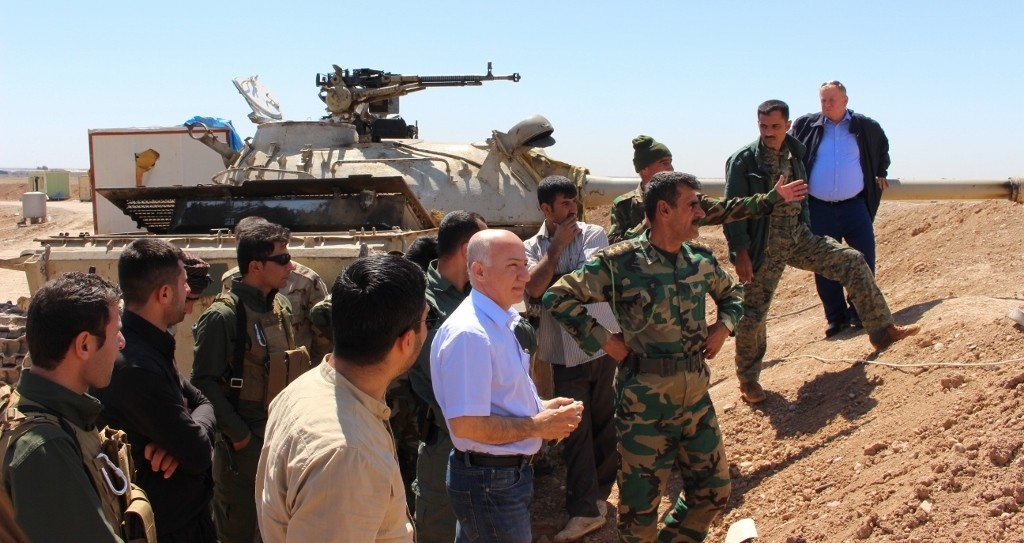 MERI research staff and President of the Institute toured the frontline positions of Maktab Khaled and Tal Alward, in Kirkuk. This provided an opportunity to assess the situation on the ground and exchange views and ideas about organisational and logistical aspects of the campaign. Staff from MERI also met with Sheikh Jaffer, Commander of the Kirkuk front, to discuss strategic issues in the current conflict. With the Kirkuk governorate the scene of heavy fighting, MERI was briefed on the current strategic dynamics in the area, while identifying issues that have been limiting the efficiency and capabilities of Kurdish forces.

MERI has been engaging with a number of political and military actors relevant to the institutionalisation and unification of the Kurdish Peshmerga forces. The Institute will also bring together domestic and international experts on the subject at hand. In this context, on the 10th of May, MERI is co-organising a conference, in partnership with the Carnegie Middle East Center, dealing with security and military issues in Iraq.