‘Prospects for increased future collaboration between MERI and the UN exist and MERI would be delighted to help the United Nations Assistance Mission in Iraq (UNAMI) as our objectives on nation-building, peace, democracy and stability coincide with each other.’ This was reiterated by MERI President, Professor Dlawer Ala’Aldeen to Mr. Jan Kubis, Special Representative to the UN Secretary General and Head of the United Nations Assistance Mission for Iraq (UNAMI). Accompanying Mr. Kubis to MERI were Mr. Sokol Kondi, Head of UN Regional Representation Office in Erbil and Mr. Abdurrahman Abu Laban, Political Affairs Officer. 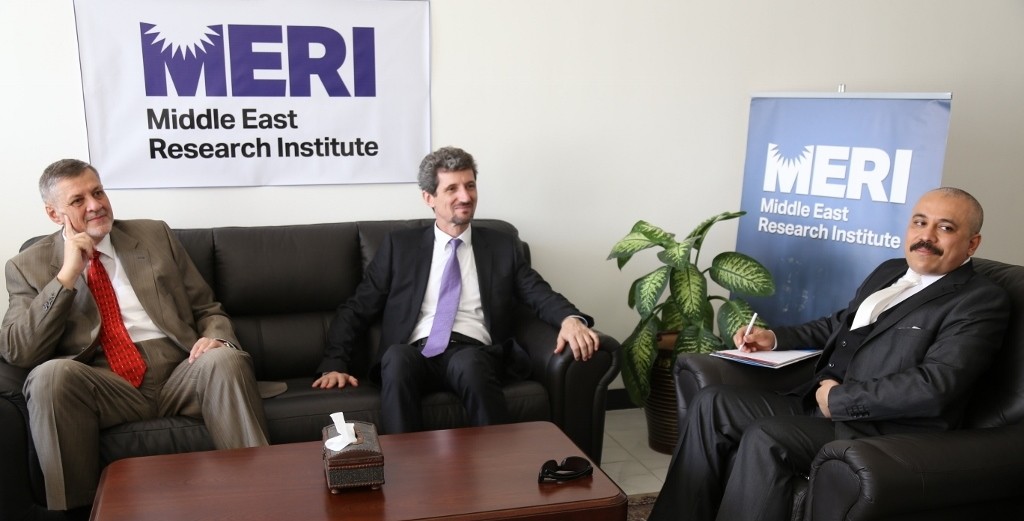 Mr. Kubis was of the view that ISIS constituted one of the biggest threats to the stability and security of Iraq and it was only through collective efforts involving the Shias, Kurds and Sunnis that ISIS could be defeated. For the UN, the latest advances of ISIS in Iraq and neighbouring Syria is of ‘major concern.’ The critical issue is that Iraq needs to deal with the internal fragmentation and adopt a strategic vision with a set of defined goals for the future. The Iraqi leaders who clearly deem ISIS as a threat need to translate words into concrete action.

MERI President emphasised MERI’s contribution in bringing all components of Iraqi society, as well as regional states, closer through its conferences and research projects. In this regard, he apprised Mr. Kubis of the Institute’s project on Kirkuk and providing a ‘working document’ for instituting confidence building measures between the different communities in the Governorate. Also emphasized were the Institute’s positive overtures in reaching out to stakeholders in Baghdad in order to encourage more collaboration so that the culture of think tank and independent research flourishes in Iraq.

Mr. Kubis appreciated MERI’s efforts relative to nation-building, peace and stability in Iraq and the dire need and necessity of a win-win situation involving the Shias, Kurds and Sunnis.