David Miliband at MERI: ‘There is a Strong Humanitarian Imperative to Engage in Syria and Iraq’

“Right now, in Syria and Iraq, the International Rescue Committee is faced with the biggest humanitarian crisis in the world, and there is a strong humanitarian imperative to be engaged.” This was expressed by David Miliband, President and CEO of the International Rescue Committee (IRC) and former UK Foreign Secretary in a briefing at MERI on February 15, 2015.

As the humanitarian crisis in Iraq and Syria mounts, David Miliband was of the opinion that if refugees are accepted by the host state, they can be a contributory factor to the economy. The Kurdistan Region, it was stated by MERI’s President, Dlawer Ala’Aldeen, had played an important role in the current humanitarian crisis by enduring five waves of refugees, including, Syria, Fallujah, Anbar, Sinjar and Kobane. A dreaded sixth wave is awaited as the operation in Mosul gets underway which will see more refugees and IDPs making their way to the Region. The situation was indeed dire and needs urgent attention as in Dohuk, where one in three people are refugees.

Elaborating the role of the IRC further, David Miliband stated that a quarter of IRC’s work is in Syria while half of it was concentrated in Africa. As regards Syria, David Miliband reiterated that, first, there seems to be no light at the end of the tunnel and with each passing day, the country is imploding and becoming more ‘Balkanised.’ As the situation perseveres, it is harder for the IRC to carry on its humanitarian work and assistance. Second, the response of the Syrian crisis on the part of the neighbouring countries was one of rejection. He alluded to Lebanon where Syrian refugees have not been allowed to enter the country as they are deemed a security risk and threat. Third, the prospects for peace in Syria are grim for no political process exists in Syria. Making comparisons with the Balkans in the 1990s, Miliband stated that in the Balkans there existed a political process, despite the brutal bloodshed, that helped engender a peace process combined with support from the international community. 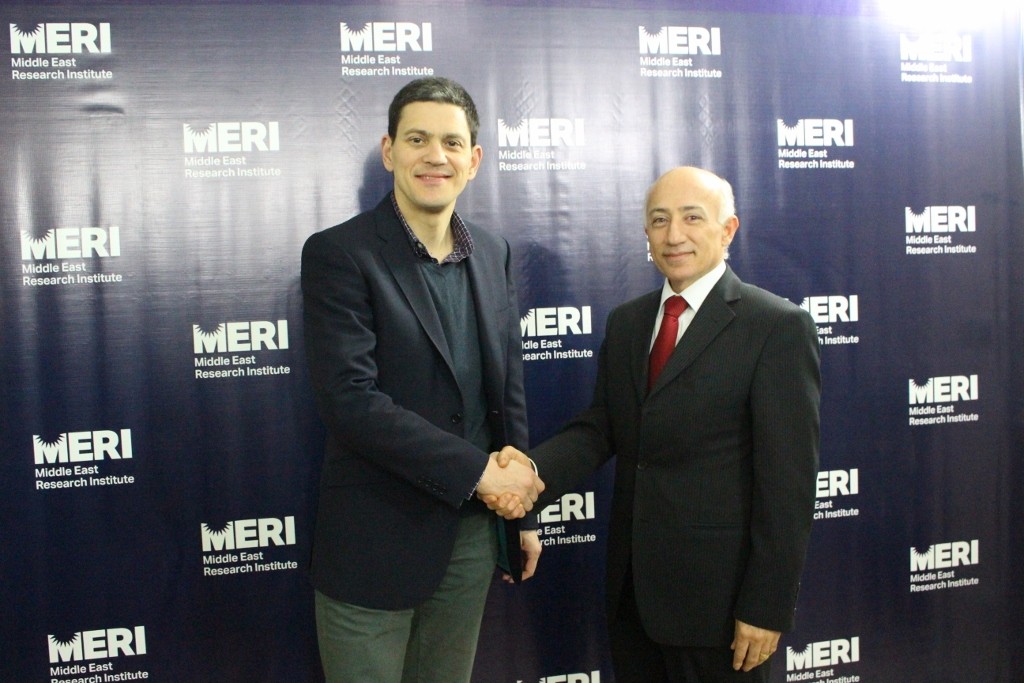 As for the wider Middle East, though the international community is engaged with local partners and stakeholders in staving off ISIS and attending to the humanitarian crisis, Miliband asserted that more funding and critical attention was required from the United Nations and world powers to mitigate the humanitarian disaster. However, the efforts of the international community need to be adequately compensated by internal efforts from the Middle Eastern countries in order to find indigenous solutions keeping in view local sensitivities.

MERI experts present at the briefing echoed David Miliband’s assertion by reiterating MERI’s efforts in finding local solutions to conflicts and humanitarian disasters that plague the Kurdistan Region and Iraq. MERI Fellows further provided valuable insight with Sam Morris elaborating on the war against ISIS and the state of Kirkuk. Athanasios Manis detailed Turkish policies in response to the current crisis. Roger Guiu provided empirical data on the refugee and IDP crisis in the Kurdistan Region.

Accompanying David Miliband was IRC’s country director for Iraq, Aleksandar Milutinovic, together with colleagues from the Jordanian branch, who detailed IRC’s work in Dohuk and Suleimaniyah and identified the shortage of funds that has hampered the work of the UN and affiliated agencies to address the plight of displaced people.