“What happens after ISIL is defeated? And should we be worried about unity in the Kurdistan Region, and Iraq”? These were important questions raised by the Consul-General of the Kingdom of The Netherlands to the Kurdistan Region of Iraq, Mr. John van der Zande, in a meeting with experts at the Middle East Research Institute (MERI) in Erbil on December 17, 2015. The visiting delegation also included The Netherlands’ Deputy Ambassador to Iraq, Mr. Jan van Weijen, and Senior Policy Officer to Iraq, Mr. Tim Kreuk.

In responding to these questions, Professor Dlawer Ala’Aldeen, President of MERI, provided his view on the current political climate in the Kurdistan Region as well as thoughts on Erbil-Baghdad relations, noting that: “Democracy is in evolution here and we have to remain optimistic. The fact that new political parties can make it into the government without having an armed group behind them testifies of the progress we have made in Kurdistan Region”. Emphasising the importance of continuing dialogue, he explained the critical role institutes such as MERI can play in providing an impartial platform for promoting discussion and fostering high-level debate. “MERI sends the signal, we are here to help, if you want us”. 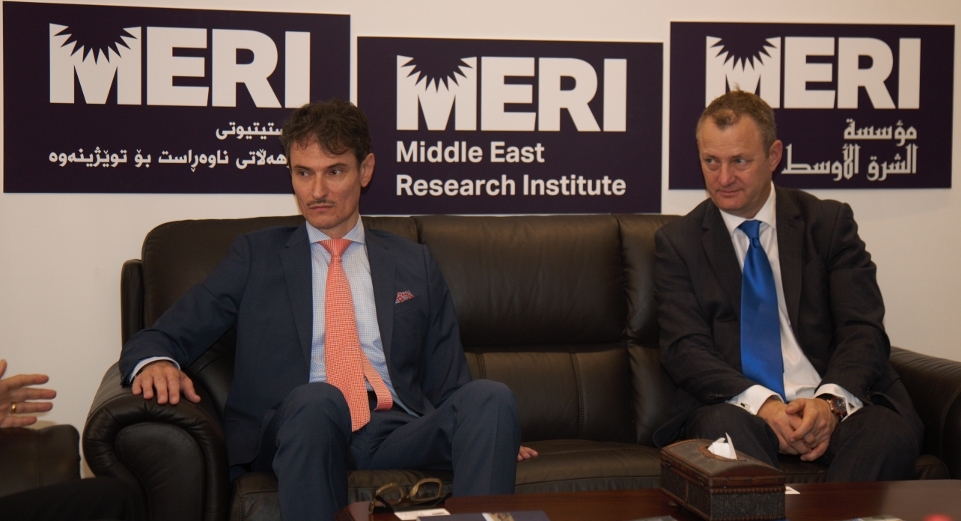 Furthermore, MERI members suggested what countries such as The Netherlands can do to assist the Kurdistan Region in continuing its path to democracy given that they are in a position to actively encourage dialogue, transparency, and rule-of-law, “European countries could condition their assistance to demands of nation-building, democratisation and confidence-building between parties here”.

“When it concerns the unity of Iraq, talk must not be on borders but instead on investing in the people and institutions of Iraq as a whole.”

Concerning the unity of Iraq in a post-ISIS era, both MERI and The Netherlands delegation agreed that the focus of international allies should be adjusted and that it must offer Sunni Arabs political alternatives to violence. Sunni Arabs will look to the Kurdistan Region and would in the future want the same level of autonomy in Iraq. When it concerns the unity of Iraq, talk must not be on borders but instead on investing in the people and institutions of Iraq as a whole.