On January 29, 2015, MERI hosted a delegation from the Martti Ahtisaari Centre (CMI), one of the world’s leading independent conflict resolution organisations. The organisation was established by the former President of Finland, Martti Ahtisaari, recipient of the Noble Peace Prize in 2008. In the same year CMI played a major role in drafting ‘Helsinki II Agreement’, which offered a framework for reconciliation in Iraq. The delegation was headed by Mr Ilkka Uusitalo, former Ambassador to EU in Iraq, who was accompanied by Saana Koskitalo and Hussein Al-Taee.

CMI’s recent visits to Iraq and Kurdistan Region are part of their mission to understand recent developments and changes in face of a relatively new government in Baghdad and the emergence of ISIS. Their major interest is to find out whether there are processes of reconciliation in place, what the challenges to implementation are, and who could be the drivers of reconciliation in Iraq. At MERI, members of CMI delegation shared their observations and stressed the urgency for reconciliation between Sunni and Shia.

Present MERI experts outlined their engagement in dialogue and reconciliation efforts through their various activities such as MERI’s inaugural conference, the MERI Forum, where Iraq’s top leaders including the President of Iraq, Dr Fuad Masum, the incumbent and former Prime Ministers of Kurdistan Region, Nechirvan Barzani and Barham Salih, the Speaker of Iraqi Parliament, Salim Al-Jabouri, Vice President of Iraq, Usama Al-Nujayfi and other leaders discussed and debated ways forward for the Iraqi state. With this conference and similar events MERI tries to introduce and establish a culture of dialogue and debate paving the way for trust-building and reconciliation.

Other engagements that tie in with the same objective include MERI’s Kirkuk Reconciliation Project, where novel solutions and possible recommendations are outlined at grassroots level. In collaboration with several other organisations, MERI is also currently conducting a research project on IDPs and their accommodation and integration within host communities. Beyond research, MERI keeps a close eye on anti-ISIS war and continues to raise concerns about accusation and counteraccusations about atrocities committed, among other places, in the southern front. 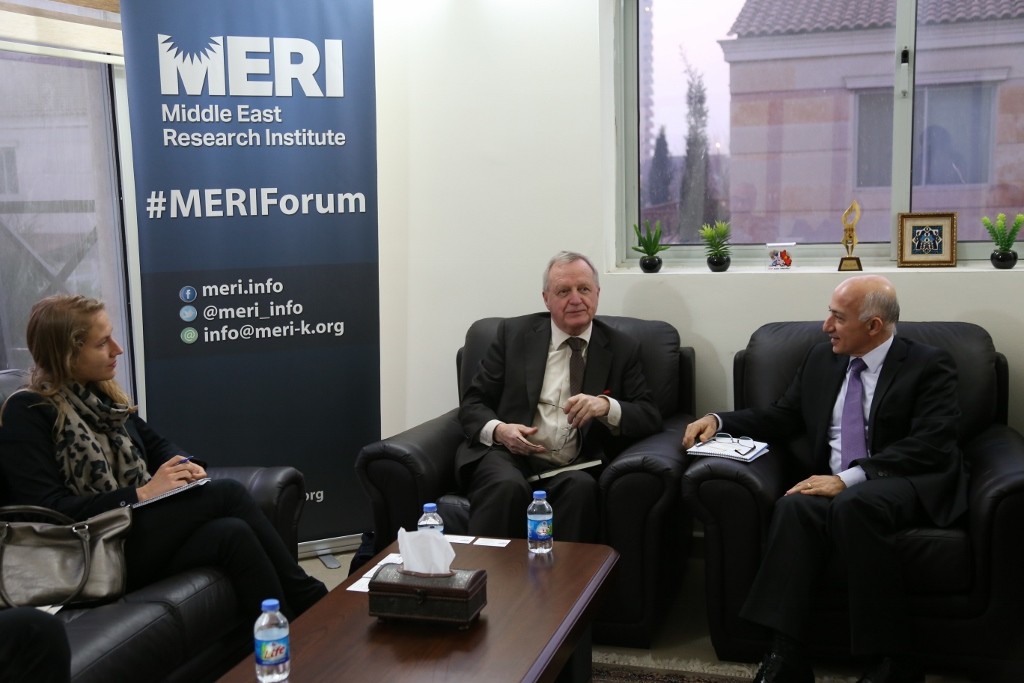 The CMI delegation was keen to understand the position of Kurdish leaders and their commitment to reconciliation. MERI’s president, Dlawer Ala’Aldeen, apprised the CMI representative about changing patterns in the Middle East specifically in the aftermath of the fall of Mosul.

One major issue discussed in depth at the meeting was the role of the EU in the Middle East. MERI experts expressed their concern about the incoherent EU foreign policy and its damaging effects to the region. They spoke critically about United State’s low level of attention to Iraq and the hopes that the European Union would take a more active role to fill the gap. According to a MERI expert, the EU should not leave Iraq to regional players, as Iraq is geographically too close to Europe to be ignored.

Ilkka Uusitalo agreed that Iraq had, in the past few years, fallen away from EU’s agenda, but ISIS had once again brought it back in.  The EU, he remarked, has debated a new strategy in the past few months and will most probably adapt this at the next Foreign Affairs Council on the 9th of February.

Referring to the current political will of many EU member states, mainly caused by the threat of radicalism and ISIS, Ilkka Uusitalo pointed to EU’s accurate assessment of its own vulnerability e.g. through ISIS returnees. According to Ilkka Uusitalo, EU Middle East politics would be considered as a major area of concern by EU decision-makers such as the new High Representative of the Union for Foreign Affairs and Security Policy.