The EU-Iraq security partnership: A Policy Debate with MEPs

A Policy Debate with European Parliament Subcommittee on Security and Defence

“The Middle East, Iraq and Kurdistan are key partners of Europe… What takes place here has consequences in Europe and vice versa”, said Nathalie Loiseau, Chair of the European Parliament Subcommittee on Security and Defence (SEDE) in a MERI policy debate held on 25 May 2022.

Ms Loiseau headed a delegation of seven members of European Parliament (MEPs), along with a group of senior parliamentary advisors and staff (listed below), who visited both Baghdad and Erbil. Their aim was to engage Iraqi policy- and decision-makers and to develop a deeper understanding of the security challenges facing both Iraq and the Kurdistan Region (KRI).

In her opening remarks, broadcast live, Ms Loiseau, stressed that the EU pays a special attention to the Middle East as its immediate neighborhood and works closely with its regional partners on security and defence issues. She appreciated the role of Peshmerga forces in the fight against Islamic State (IS) which she considered a threat not only to Iraq but to Europe as well.  “We could defeat the IS caliphate because of the strength of partnerships and trust that exists between the EU and its partners”, she remarked. 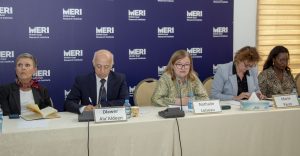 Ms Loiseau believed that this strong partnership should continue in the future because the war against terrorism has not ended yet and IS should not rise again. However, relying only on military means will not be enough to achieve these goals. She pointed out that the EU has provided recovery and reconstruction programs to help internally displaced persons to return to their area of origins. Another important approach for the EU is to work with civil society organizations to fight terrorism and extremism in the region.

For the new challenges and ongoing conflicts in Iraq, Ms Loiseau explained: “the EU has to find better solutions and engagements in the region, and has to be modest and listen to local best practices to achieve better results”. She added: “Iraq plays an important role in encouraging peaceful relations with its neighbors, and we [the EU] have to play our part as well. We have to have a strong dialogue to develop a proper understanding.” She highlighted that the SEDE would like to ensure that the EU policies and actions are impactful on the ground. The Subcommittee usually proposes the budget for the EU security and defence programs and works closely with other EU institutions and the civil society to find better, more effective and durable solutions.

On the Peshmerga reforms and merging all of armed units into a disciplined and united force, Ms Loiseau commented that “unity among the different actors is vital”. Having unity, dialogue and mutual respect between the KRI and the EU are key to making the EU policies and actions in the Region more effective. 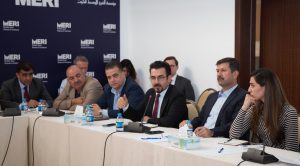 Ms Loiseau’s presentation was followed by a highly engaging discussion which was carried out under Chatham House Rules. During this part, a number of issues were highlighted and discussed by various participants, these are summarised here without attribution or affiliation.

This roundtable was attended by a number of policy makers, civil society activists and academic experts as well as a delegation from the European Parliament Subcommittee on Security and Defence (SEDE) and the team of the EU Advisory Mission in Baghdad and in Erbil.

The US strategies in Iraq: A policy debate with Amb. Matthew Tueller
The Sadrists’ Gamble: A Milestone Even if It Fails