The US strategies in Iraq: A policy debate with Amb. Matthew Tueller

“We are making good progress on constructing a permanent Consulate General in Erbil, the largest US Consulate facility anywhere in the world. And I see that as the nature of the long-term strategic commitment that the United States has to Iraq and to the Kurdistan Region”, said Matthew H. Tueller, the United States Ambassador to Iraq, in a MERI policy debate on 15 May 2022.

In this special roundtable, Amb. Tueller outlined the US policies in Iraq and stressed that the strong and long-term strategic partnership between the two countries goes far beyond the military aspect of relationship. It intends to move towards a “shared goal of Iraq as an emerging strong, stable and sovereign state”, which can protect its borders and ensure that no armed forces outside of the government control can influence inside. These are “ongoing challenges” that Iraq faces and the US is trying to help in overcoming them. 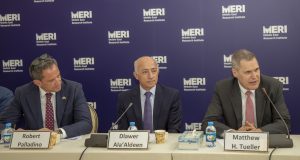 Democracy in the Middle East

Amb. Tueller emphasised that the US rejects the misconception which believes that democracy cannot grow in some regions or countries. People all around the world and including the Middle East aspire to have a legitimate and responsive government which can deliver basic needs and protect its citizens. He added that it is not only in the interest of the people of the Middle East to build stable and democratic countries, but also in the interest of the US as well. To achieve a legitimate and responsive government, there has to be a political system which allows for holding fair and free elections, where the political parties can be elected based on their political programs for serving the people.

Iraq as a model

Despite the major challenges that Iraq faces, Amb. Tueller remained “very hopeful for the future of Iraq” and believed that it can be a model for the whole Middle East- which can be transformational. According to the Ambassador, the US believes that Iraq is on a path towards democracy, but it needs stronger security services which can provide security to civilians and its territory, and needs a government that is not infiltrated by militias, non-state armed groups and criminal groups which weaken state institutions. There is positive progress when it comes to forming a new government in Iraq and the last general election was the most open and transparent election in the post-2003 Iraq. However, there were some instances which occurred after the election, where some militias attacked the US Consulate General in Erbil and other areas in the Kurdistan Region of Iraq (KRI). Amb. Tueller stressed that these attempts and attacks must be rejected and condemned.

Looking back at his three-year experience in Iraq, Amb. Tueller considered the mass protests of October 2019 by the young Iraqis as the most significant event. It was ‘surprising’ when young Iraqis protested against the Iraqi government and demanded that their voices be heard. The protesters rejected the political parties and the government of that time because they believed that they were not serving the Iraqi people and were representing the interests of other countries rather than Iraqis. These protests resulted in the government resignation and early elections. 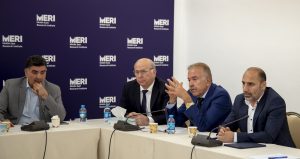 The US is here to stay

On the long-term future of US-Iraq relations, Amb. Tueller emphasised that the US has a long and enduring strategic interest with Iraq and “will remain in Iraq and will partner with the Iraqis who want to establish a stable and strong democratic Iraq”. He referred to the July 2021 Strategic Dialogue between the two countries which is seen as a mechanism to reset their relationships.

“We see Iraq as a linchpin for security and stability for the Middle East region”, he stated. Iraq will become even more of a strategic partner in the coming years as the effects and consequences of climate change arise in Asia, Europe, Middle East and Africa. For the US, it will be easier and more strategic to work with an Iraq that is stable and strong to fight the causes of climate change in the region.

Amb. Tueller believes that there are a number of ambiguities between Erbil and Baghdad which have caused escalations and conflicts. There is good will between the two sides and there are political parties among the Kurds, Shias and Sunnis who seek to find enduring solutions for the ongoing conflicts in Iraq. However, until now, both sides have mainly focused on their short-term goals and interests rather than long-term solutions and resolving ambiguities.

A strong Kurdistan can be better protected when there is a stable and sovereign Iraq, according Amb. Tueller. Thirty years of high level of autonomy gave the KRI the opportunity to prosper and develop in many sectors. Comparing it to other parts of Iraq, the KRI is a better place for investment and tourism, said the Ambassador. He also acknowledged that the US is saluting the level of support and security which the KRG provided to other Iraqis who fled to the KRI, including religious and ethnic minorities from other parts of Iraq. He appreciated the political culture and tolerance tradition of the KRI in welcoming and providing shelter for the internally displaced persons.

On the Peshmarga reform, Amb. Tueller stated that the US and the International Coalition against ISIS help both Peshmerga and Iraqi security forces in building joint coordination cells in areas where there is a security gap between the two forces. They support the Peshmerga reforms within the Ministry of Peshmerga to establish a modernized, unified and disciplined force.

Amb. Tueller stated that the Syrian Democratic Forces (SDF) have been a strong and very effective US partners in the fight against ISIS in Syria. “This partnership with SDF has been essential”, but “that does not mean we are trying to establish a North-East Syria Autonomous Region”. He stressed that the SDF fully understands this fact. According to the US policy in Syria, the Syrian Kurds have to be part of the new Syria and included in future talks about rebuilding the country. Concerning the PKK, the close alignment of the YPG in Syria with PKK is problematic and creates perplexities for the US in the region. Amb. Tueller stated that the PKK alignment with Shia groups in Sinjar is another challenge for Iraq and the KRI.

When asked about his best moments in his three-year experience in Iraq, Amb. Tueller cited two specific events. One was the conference that was organised by Prime Minister Kadhimi in August 2021. A group of Arab and neighboring political leaders were invited to come to Baghdad and discuss the ongoing issues in the region. He stressed that the US encourages Iraq to have a normal relationship with Iran, but it should be based on mutual respect for sovereignty. Also, the US acknowledges the fact that both Iraq and Iran have deep cultural and historical affinities and shared interests.

Another good moment was during an event organised by the US Embassy in Baghdad for young Iraqi boys and girls between 8 to 11 years, coming from camps. They were invited to come to the Embassy and spend the day there, allowing them to use the facilities and interact with the staff. There was one girl who sang a song to express her gratitude to the Embassy and opened the door for all the other young participants to sing their preferred songs and share their feelings with the Embassy. 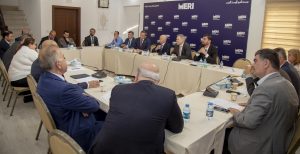 This roundtable was attended by a number of policy makers, politicians, media professionals and academic experts as well as the US diplomats, including the US Consul General in Erbil and his staff (listed below). The Ambassador’s presentation was followed by a highly engaging discussion which was carried out under Chatham House Rules. During this part, a number of issues were highlighted and discussed by various participants, which are summarised here without attribution or affiliation.

KDP and PUK in Sadir’s Chess Game
The EU-Iraq security partnership: A Policy Debate with MEPs