Iraq and Kurdistan Region in a Complex Neighbourhood

In this session, key issues and challenges facing Iraq and the Kurdistan Region of Iraq (KRI) were discussed with Nechirvan Barzani, President of KRI. These included the recent Iraqi elections, the Erbil-Baghdad relations and the KRI’s relations with neighbouring countries. The moderator, Bilal Wahab, started with the question of democracy in Iraq and the recent elections of 10 October 2021.

Nechirvan Barzani believed that the last Iraqi election was the best election in terms of technique and having less vote rigging. He added: “The level of turnout was low all over Iraq, and it was a clear message from the people to the authorities that they are not happy with the governance system and it needs to be improved. I hope that we all Iraqi politicians look at this as an opportunity to improve ourselves in all of the areas.”

Barzani pointed out that Democracy is not a gift basket that can be brought from outside and given to the people. It is an on-going process, and added: “In my opinion, Iraq is still in the transitional period and this transitional period needs to be better. We cannot say that everything in this country can be improved overnight…. People in Iraq still believe in the political process and that elections can bring about change…. But the big fear is that when people lose hope and believe that elections do not change anything. I believe this is when a big reaction from the people will occur”. Barzani noted that the new generation of Iraqis want to have a better future, more job opportunities, better services and improved life circumstances.

Nechirvan Barzani explained that the Kurdish political parties and the KRG have taken part in the political process in new Iraq after 2003 and contributed to stability, welfare and security of the country, however, the central government has not implemented many laws in the constitutions. “80% of Iraqis voted for the constitution, and we all went to Baghdad with many wishes and aspirations. After 18 years people are asking themselves, was this constitution implemented? The Answer is No”. Barzani added. He pointed that the KRI demands its constitutional rights from Baghdad while it accepts its own obligations and rights. So, the constitution needs to be implemented in order to achieve stability in Iraq.

Barzani stated that “the pro-centralization mentality is still dominant in Baghdad,” and believed that “the Sunnis of Iraq constantly fear the future. Iraqi Shiites always talk about the past: they fear the past. However, the Kurds in Iraq fear their past, present and future,” …. “as long as this fear remains, you cannot return political stability to the country. I believe the regaining confidence and political stability is an essential requirement for Iraq”.

On the formation of a new government in Baghdad, President Barzani reiterated that his office can be an umbrella for creating unity among ethnic and religious groups as well as Kurdish political parties that they can have a common strategy and work together when they go to Baghdad. Working together and speaking with one voice, he described this as the main condition for success for Kurdistani parties. “The way Baghdad treats Kurdistan Region in the case of budget…. cannot be called federalism, this is not federalism…. Baghdad’s approach toward the KRI is a centralized one. How long do we have to wait for the sending of the budget and salaries [by Baghdad]? These issues should be resolved. If Baghdad considers the people of Kurdistan Region as Iraqi citizens, and knows that they have constitutional rights, these issues have to be resolved”. 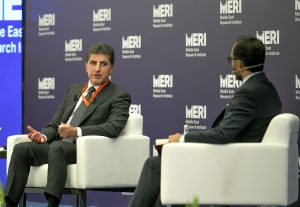 On the issue of banking system and its importance for state building in Iraq, Barzani explained that “Iraq does not have a proper banking system. What we see now in Iraq is only about exchanging money and the stock market, meaning that we do not have an economy. The Iraqi economy is based on monthly oil sale. And the money received is then distributed. That’s it. We cannot call it an economy or call it a strong economy in Iraq”. He believed that by creating and having a functioning banking sector for Iraq, the country will thrive and foreign investment will increase.

KRG’s relationships with the neighboring countries were discussed. Beginning with Iran, Barzani emphasised that the KRI has good relationship with Iran. For example, there is nearly $11 billion trade between Iraq and Iran, and 70% of the goods imported to Iraq from Iran are entered through the KRI. Regarding drone attacks on Erbil airport by Iran-backed militias, he stated that Baghdad has to deal with those militias that cause instability. He highlighted that the Iraqi Prime Minister should act and control these armed groups and stop them from attacking the KRI.

With regard to Turkey, its military operations and confrontations with PKK, President Barzani stated that the KRI policy is crystal clear: “The Kurdistan Region and Iraq should not be a source of threat against the neighboring countries. It is the PKK that has deepened the issue. The PKK is a great problem for the Kurdistan Region”. He articulated that the PKK does not respect any decisions by the KRG or the sovereignty of the Region and its institutions. The PKK has said and declared that they consider all Kurdish-populated areas in Turkey, Iraq, Iran and Syria as their home, adding that they do not need permission from anyone to be there.

He also mentioned the Sinjar Agreement which was signed between KRG and the central government. He believes that the reason this has not been implemented is due to the PKK’s presence in this region. It is Baghdad’s responsibility to deal with this issue and find a solution to the conflict, according to Barzani.

On the US presence in Iraq and the strategic dialogue between the two countries, Barzani stated that the US has fulfilled its commitment in Iraq and now the Iraqis should decide what kind of relationship they want with the US. He added: “The strategic agreement between Iraq and the US is very comprehensive and covers a variety of areas including education, economy, culture and energy. Iraq can seize the opportunity and benefit from all of these areas in its relations with the US… Strategic relations between Iraq and the US in Baghdad are not taken seriously”.

On people’s expectations, Nechirvan Barzani thought that the KRI went through to main phases. He called the period from 1991 to 2003 “the self-protection phase”, when the collective priority was to protect the region and provide the salaries. Whereas after 2003, the process of building infrastructure came into play. He also explained that people now have greater demands and expectations, and they deserve to have a better life. On accountability and building institutions in KRI, he thought this is a long-term process which cannot be built overnight. He claimed that the KRG has developed and succeeded in many sectors, but at the same time there are shortcomings which need to be addressed.

President Nechirvan Barzani acknowledged that there are differences of views among Kurdish political parties, but when it comes to the interests of the Kurdistan Region, most of them are united. They all try to protect the interests of KRI in Baghdad.

With regard to writing a constitution for KRI, he stated that, “Our intension is to finish writing the draft Constitution before the next election of KRI which will take place next year. The KRI Constitution will be in line with the Iraqi Constitution”.

Finally, on Kirkuk and the KRI budget, Barzani claimed that if there were a law for the distribution of oil income in Iraq, we could have solved the issues of budget and Kirkuk automatically. He added: “we want to find a peaceful solution on Kirkuk. Our mission is coexistence, and peace for all of the components. Luckily there are good developments in this regard”. He stated clearly that the budget issue and the salaries of the government employees in the KRI have to be separated from each other and cannot be mixed. He pointed out that the issue of salaries of public employees from the KRI has been used as a tool of pressure against the KRI. He said that the KRI is ready to solve all of these issues with Baghdad because resolving these issues with the central government not only benefits the people of KRI but all of the Iraqis.

Click here to view the video recording of the panel discussions at MERvI Forum 2021.

Regional Actors in Iraq’s Neighbourhood: Visions for Stabilisation
Global Support for Stability and State-building in Iraq