Turkey and Iran are the two most influential regional actors which share vast borders with Iraq and have a long history of direct and indirect interventions inside the country. Their competition or rivalry in the wider Middle East have had profound impacts on the security dynamics and stability (or lack of) across the region. Kamaran Palani, the panel moderator, invited the two speakers to outline their respective country’s regional foreign policies.

Ali Reza Guney, Turkey’s Ambassador to Iraq pointed out that the Turkish foreign policy in the region is based on three main pillars, including security, stability and prosperity. To explain the security aspect, he used the metaphor of good and bad neighbours. Turkey would like to have a neighbour that can provide security to itself and to its neighbours.

For the second pillar, stability, Guney used the same metaphor of “bad neighbour” and “peaceful and helpful neighbour”. He emphasised that Turkey would like to have a stable and secure Iraq as a neighbour. For his country’s export-based development model, the Turkish Ambassador explained that Turkey “needs an open, stable and secure route. The [only] route that goes south to [the rest of the] Middle East, to the gulf and beyond is through Iraq” because the Syrian route is blocked due to the on-going war. “Iraq is an artery, and the main artery that we should be interactive for our goods to be transported, for other goods to be coming to Turkey via Iraq”. He also underlined that a stable, secure and powerful Iraq can play a positive role in the region: Iraq can provide the bridge where “the other regional countries [can] to come together to solve their differences and talk about their different of points of views, which Iraq is serving now”. 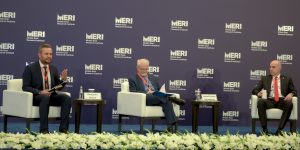 In answering the question of Iran’s plans for a new regional order, Seyed Kazim Sajjadpour conceptualised an A-C concept, namely ‘A’ for assumptions, ‘B’ building block and ‘C’ cognitive map. Under A, he explained, there are the structuralist, determinist and essentialist approaches who believe that the region is weird and wrong. According to Sajjadpour, these kind of approaches which assume that “the region should be fixed” are wrong. Another assumption-based approach, which needs to be deconstructed, is the simplistic reductionist one that does not produce an adequate understanding. Sajjadpour believed that the Middle East issues are complex and need to be dealt as such. The final assumption approach based on an alarmist and threat producing notion that “Iran is a dangerous country…is overtaking the region” which is wrong and needs to be deconstructed. To address these assumptions, he believed, adopting the concept of building blocks is required. He named three examples of building blocks which are: place (geopolitics), past (history) and people (culture). They are important building blocks and foundations for any regional thinking order.

The final concept which Sajjadpour discussed was the cognitive map, emphasising that the World is not vertical anymore. He said: “It is not just United States, Russia, or China, or EU, which matter, we matter also. Turkey matters, Iran matters, Kurdish Region matters”. Recognising multiple actors on different levels and having bilateral relationships are important in designing a new order in the region. Sajjadpour added, “we have multiple actors these days. Global actors, regional actors, national actors and subnational actors. The Region, I mean Kurdistan Region is an actor. Who can ignore this actorship? I think this concept of multiple actorship is very important for any regional design, regional reshaping”. 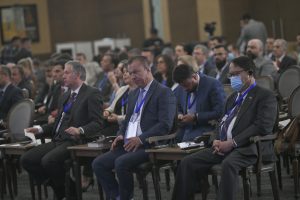 Regarding the role of the KRG in Iraq and its relations with Turkey, Ali Kazim Guney mentioned that the KRG plays an important role in the stability of Iraq. He added that “the KRG is the neighbouring party in our relations with Iraq. The 335 km border extends along the Kurdistan Region and Turkey. We don’t have a border with the Iraqi central government itself. We consider the KRG as an integral part of Iraqi state, it is at the end of the day a unitary state in the eyes of Turkey. Yes, it is a federal system. The Kurdistan Regional Government has constitutional rights and responsibilities and vice versa. So, the dialogue and the point of conflict between the central government and the KRG affects the stability of Iraq and it directly has an impact on Turkey-Iraqi relations”.

According to Sajjadpour, the KRG-Iran relationship has proven the proverb which says ‘a friend in need is a friend in deed’.  Sajjadpour believed that “nothing can damage this very a structural deep-rooted bond” between the Kurds and Iranians.

With regard to the PKK, Guney pointed out that it is not only a threat for Turkey, but also for the KRG and Iraq. Therefore, Turkey demands Iraq and the KRG to coordinate and collaborate to “eliminate” the PKK in the region.

The issue of climate change and water shortages in Iraq was also discussed. It was assumed that Turkey and Iran played negative roles to cause droughts and water scarcities in Iraq. Both Sajjadpour and Guney replied that it is a regional issue and that the region has environmental problems. Guney argued that “borders are irrelevant” and “accusations do not help”.  He pointed out that Turkey has collaborated with Iraq to solve the water shortages in middle and south of Iraq, but the problem is with Iraq itself, because “there are no dams, no good infrastructure, no pipelines and no plans of proper water management”. Therefore, water does not reach to agricultural fields. Iraq needs a better infrastructure in this regard. Guney stated that Turkey is ready to help Iraq in building such a system. He added, “Turkey decided to help the Iraqi side to build infrastructure. You need dams. You need pipeline. There is no pipeline. Just travel to Basra or where ever you want in the south. Erbil is in a good condition. You need the system that treats the water that goes to the rivers,… This is the system that should be built in Iraq. Turkey now has established a working group with the Iraqi ministry of Water [Resources] on how to treat the deficiencies in the water management system. Efficient usage of water is a must. You cannot just accuse and point fingers at your neighbours. Release me water. Even if we release you water, you have the capacity to use it? Iraq needs this infrastructure and our contractors, our business people are quite involved into this area”.