Global Support for Stability and State-building in Iraq

The purpose of convening this panel was to discuss the international support for stability and state-building in Iraq, and the challenges or barriers they have faced. Particular emphasis was put on the future of coalition forces in Iraq, particularly after the US withdrawal from Afghanistan. Farhad Alaaldin, the moderator of the panel, started by asking each speaker to outline their countries’ policies and commitments to stability in Iraq.

Ambassador Ulric Shannon of Canada outlined his country’s policy and its commitment to stability in Iraq. As an active member of NATO and a leading member of the international coalition against ISIS from the outset (2014), Canada assumed leadership of these forces for the first two years. In parallel, the Government of Canada has spent over five million Canadian Dollars in Iraq since 2016, across different sectors, to support stabilisation, humanitarian aid and capacity building programs in Iraq.

In Shannon’s words, the Canadians “don’t have a long history in Iraq” but in 2016 their government decided to respond to the ISIS related crisis with substantial assistance offered to Iraq, Syria, Lebanon and Jordan. For Canada, this was the “largest assisting program abroad in terms of scale”, and was unique in that Iraq is considered an inherently rich country where they have an assisting programme. “[Currently], we are looking at moving away from an assistance relationship to a more comprehensive relationship that is built on the usual bilateral interest, trade, investment, people to people linkages. For us that reflects the sort of natural evolution of aspirations in Iraq”, said Shannon.

However, according to Amb. Shannon, while there have been palpable improvements in terms of the overall security across, but major problems remain in many sectors, such as governance, which cannot be further improved by external support and programming.

He added: “I have to justify to my government and to Parliament the sums that we are investing here. I have to demonstrate results and show that the partnerships that we are engaged in Iraq across different lines of effort are the right ones and the partners that we are working with are serious about the work that we are doing”. [However], problems remain….The human development index I noticed last week is falling now to 123 out of 180 countries”. What is keeping it from moving back up are many issues that by and large donors cannot fix through programming. We are happy to provide technical assistance and things like that but increasingly I think we are running to core issues of governance that only Iraqis can solve. I [therefore] question whether more assistance and more aid are going to have better results in what we have witnessed in the last few years”.

The United States has been by far the most generous in helping Iraq in various sectors. Ambassador Matthew Tueller named several recent examples of US support, including providing 500,000 doses of anti-Covid-19 vaccines (Pfizer made) to the Iraqi ministry of health, $155 Million contribution spent in areas of shelter, water supply, healthcare, food and hygiene service for the most venerable population in Iraq. According to Tueller, the US has supported projects in areas of climate change, providing $10 million dollars to UNAMI to conduct its activities and monitor the recent Iraqi election. These are over and above a $1 Billion the US has provided for Iraq’s security sector reform and capacity building.

Ambassador Tueller, also referred to the Strategic Framework Agreement (SFA) with Iraq which was signed in 2008 between the two countries. “The pillars of engagement under this strategic framework agreement cover broad areas of cooperation and subjects like public health, environment”, said Tueller. He added: “The Biden administration has prioritised very much issues like clean energy and climate change. This is of course so important for Iraq and the particular challenges this country and the region face. We talk about water shortages and proper use of those resources. And we are working side by side with Iraqi counterparts on dealing with, and adapting to, climate change and mitigating its impacts, and creating capacities to deal with what we might be facing globally in the decades to come.”

On the economic cooperation front, the US continues its effort to invest and boost the private sector in Iraq, using assistance from the International Finance Cooperation. According to Tueller, $1 billion is invested on this area in Iraq.

The SFA encompasses cooperation on human rights and elections too. Amb. Tueller explained that “The United States provided nearly $10 million to UNAMI to conduct its activities and monitor this recent elections”. This was in addition to technical support that the US provided via UNAMI and the International Federation for Electoral Systems to the Iraqi Independent High Electoral Commission’s (IHEC). “Giving the Iraqi people this remarkable opportunity that we saw earlier this month to express their preferences in terms of governance and representatives…  [Holding the election was an] extraordinary signal that democracy can work, can prevail, and can thrive here in this region. With the international community’s support I do want to acknowledge that IHEC in this election was able to conduct what many experts now are describing as the most technically sound and most transparent election that’s been held in Iraq’s history”.

Tueller thought the post-election threats that were directed against those who enable the elections, are “unacceptable and must be rejected by all parties”. The political parties or actors should remember that “what really matters to the Iraqi people … is, jobs, stability, electricity, services, education and healthcare. That is the way political parties are going to earn the trust and consent of the Iraqi people”.

Amb. Tueller added: “So, as you can see …. we share partnerships and common interests that go far beyond just the security aspect….. All of these pillars of various cooperative endeavours with Iraq demonstrate that the US in fact has a long-term commitment to this relationship and it’s a relationship is going to help sustain the long-term prosperity, stability and security of Iraq. In all of my conversations with Iraqi interlocutors, diplomatic colleagues I go to great lengths to underscore that the US commitment to this relationship is a long-term strategic interest. This is not something that’s going to change over the course of years or even decades. The United States has a commitment to the security of the Middle East and we see the security of Middle East in many respects hinging on an Iraqi state that is a strong stable state governed by institutions and rule of law. So, our partnership with Iraq benefits not only the Iraqi people and the prosperity and security of Iraq but we believe also the prosperity and security of the entire region”.

Martin Jäger, the German Ambassador to Iraq, acknowledged that the stability of Iraq has direct impact on Europe. Since 2014 the German government has dedicated more than $3.4 Billion to support various projects in Iraq, such as in stabilisation, development and security programs.

Amb. Jäger explained that “Germany is a medium size country … what the Canadian Ambassador said is applicable to Germany”…. except that they “have been with and in Iraq for more than one hundred years. Perhaps to us, Iraq is not a distant country. It is in our neighbourhood.  Stability in Iraq has a direct impact on the situation in Germany”. He described the issue of migration as an example to illustrate how close they are.

“Germany was a member of [the international] coalition of the fight against DAISH from the very beginning. We did that [not only] on the military side where the German army made a substantial contribution, but also on the development and stabilisation side too”. “We [Germany] will have a new government before Christmas…. It is safe to say that Germany’s role in, and contributions to security and stability in Iraq will continue. We will maintain our support in the fight against DAISH. This also means that we will in the future remain a member of the coalition, and increasingly support the NATO mission [in Iraq]. We will maintain our level of support on the development side [too]”, said Amb Jäger. 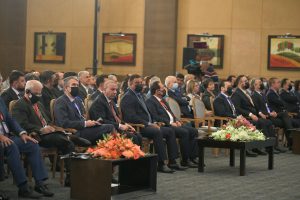 Jäger believed that stabilization is a corner stone of the fight against DAISH, which compliments the work of Iraqi security forces and that of the International Coalition. He thought “decisive stability goals have been achieved” and more than 4.8 million IDPs have returned home. However, “more work remains to be done in the liberated areas. This is why Germany as cochair of stabilisation task force will continue to be dedicated to these efforts”.

Sarhang Hamasaeed, of the United States Institute of Peace (USIP), described to his organisation’s long investment in local capacity building in Iraq. Their line of work has been to support Iraq during its transition toward inclusive, democratic and peaceful governance. They have been active in the areas of conflict and dispute resolution, while supporting the country’s civil society organisations through various programs and projects.

“The institute [USIP] has stood by Iraq and will continue to stand by Iraq in its high moments and low moments” Said Hamasaeed. “There was a need for objective analysis and objective assessments… through Iraqi [local] partners. One of our partners that we are very proud of is MERI Institute itself which has done research on how the ethnic and religious minorities see drivers of conflict and how they see reconciliation. Five outstanding of pieces of research that they have produced on the topic”, he added.

Hamasaeed then added: Since 2014, supporting dialogue in the areas liberated from ISIS, as part of helping those communities stabilise has been a key corner piece of our work. We have worked closely with the Federal government of Iraq and the Kurdistan Regional Government ….. [who had] a long history of [state]-imposed stability, but post-2003 it was our hope to help achieve stability ….. through taking the [word’s] definition beyond just the stability of the state… as in democracy where citizens, the media, civil society organisations and many others are important contributors to achieving and maintaining stability”.

Hamasaeed also explained that challenges or crises can bring about opportunities for change. The 2019 protests have changed the energy of the country and already achieved a degree of change, such as inducing early election, change of the electoral law and the formation of a new federal court. “I think it is important to sustain that level of change with other actions. That includes reactivating [Provincial Councils], and [holding] new elections at the provincial level because that is an important piece for Iraq’s democratic infrastructure. That gives the opportunity to the youth and others to participate more”.

It was noted that the role of international actors, especially the US, has changed recently, focusing on advisory roles instead of direct military support. The issues of barriers for progress and finding effective institutional partners in Iraq were discussed and references were made to youth, jobs, reforming the judiciary system, role of women, corruption, rocket attacks on Erbil airport were all addressed and discussed in this panel (see video).

All the panelists strongly believed that Iraq is different from Afghanistan and that these two countries cannot be compared. Mathew Tueller emphasised that “the US interests here in Iraq are very different than our interests in Afghanistan.”. He also asserted that the message behind rocket attacks on Erbil airport is clear and they are directed to the foreign troops’ presence in the Kurdistan Region. But the real target, as he pointed out, in these attacks is against the KRG and the Iraqi state. Tueller mentioned the role of Iran in Iraq and that some armed groups in Iraq backed by Iran should be held accountable for these drone attacks near Erbil. There should be a normal and healthy relationship between Iran and Iraq.

Iraq and Kurdistan Region in a Complex Neighbourhood