‘For us in Europe it is extremely important to engage with the political actors in Iraq to understand their perception of the issues and how we can help’ stated the Dutch Foreign Minister (FM), Albert Koenders during his visit to MERI on Monday 19th December along with a group of delegates from Belgium, the Netherlands and Luxembourg.

MERI researchers Dave van Zoonen and Khogir Wirya accompanied the delegation, along with a host of foreign and local reporters, to the village of Hassan Sham where they briefed them on their research on minorities and reconciliation in Nineveh. The researchers highlighted that the capacity of the judicial system in Iraq needs to be improved in order to deal with the post-Islamic State (IS) dynamics and voiced their concern of the proliferation of militias operating in Nineveh.

The delegation then returned to the MERI headquarters in Erbil where MERI’s President, Dlawer Ala’Aldeen, and MERI researchers, Dylan O’Driscoll, Dave van Zoonen and Khogir Wirya briefed the delegation on the current political dynamics in Iraq and the Kurdistan Region, as well as on the wider Mosul offensive against IS. The purpose of the meeting was to give the ministers a better understanding of the region before meeting with local politicians and actors.

Discussions also focused on whether the Mosul liberation is merely a symbolic victory or whether it can be a stepping stone toward rebuilding Iraq. The importance of victory in Mosul was highlighted, however, the lack of a political deal was flagged as being a great danger to the stabilisation of Mosul, which would in turn have a knock on effect in Baghdad. Ala’Aldeen argued of the important role that Europe can play in bringing the rival actors to the table in order to engage in the politics of post-IS Mosul, particularly due to the US’ political disengagement. 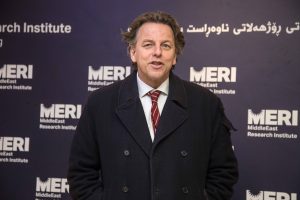 The discussion moved on to what more can be done in light of the pessimism on the future politics of Mosul and the wider region. The lack of leadership was highlighted as one of the key concerns and as a result it was argued that Europe can act as a guide to ensure the right conversations are happening and that areas such as stabilisation and good governance become a key priority.