“We have to help those who oppose ISIS”

The purpose of their visit was to learn about the latest security situation and the condition of the 1.5 million IDPs and refugees in the Kurdistan region.

During their meeting at MERI, Mr Cem Özdemir stressed the importance of international support for Kurds including both, military and humanitarian assistance. He said, “we have to help those who oppose ISIS”, and praised the Kurdistan Regional Government for its efforts and willingness to cooperate with the international community. He further pointed out that the Kurdistan Region has exceeded its capacities to accommodate the great influx of IDPs and refugees, and reiterated that Germany and the international community must work together with the KRG in order to address the pressing concerns of those affected by ISIS brutality and aggression.

In a lively debate, the MERI team and members of the delegation exchanged views on the importance of more engagement with Kurdistan Region. Mr Özdemir acknowledged the efforts of the people of Kurdistan Region to promote a society that respects human rights and peaceful coexistence. MERI pointed out that the increasing international support for Kurdistan Region is not only because of the evil nature of ISIS, but because the Region has become a trusted partner protecting the rights of vulnerable minorities. In this context, MERI further emphasised the importance of the European Union and Germany’s role in supporting the Kurdistan region in its nation-building efforts. 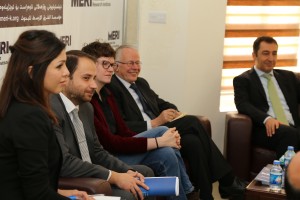 Besides the mentioned dignitaries, other members of the delegation included Mr Sahap Dag, First Chairman of the Yezidi Community in Germany, Ms Theresa Kalmer, Speaker of the Green Youth in Germany, and several journalists from the German media, including Mr Knut Krohn from the Stuttgarter Zeitung.