On 26 March, the Middle East Research Institute welcomed a delegation from the United Nations Electoral Needs Assessment Mission (UN NAM). The delegation paid a visit to MERI to discuss the political and electoral environment in Iraq and the Kurdistan region. They aim to analyse the legal and institutional framework governing the electoral process in Iraq while identifying the needs and capacity of various election stakeholders. The delegation included Richard Gee, Political Affairs Officer from the Department of Political Affairs, Electoral Assistance Division, Ana Izar, also from the Department of Political Affairs and Dimitri Manjavidze, Senior Electoral Officer, UNAMI.

The United Nations has a long history of engagement in Iraq in an electoral assistance capacity. This has been led through an integrated mission compromising of UNAMI, UNDP and the Special Representative of the Secretary General (SRSG). With this in mind, MERI representatives discussed the complex political dynamics in both Iraq and the Kurdistan region, the relationship between Erbil and Baghdad and the UN’s role in assisting the electoral process. 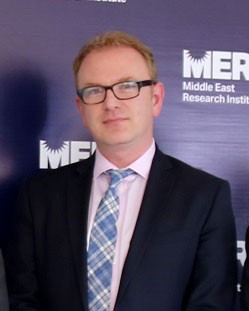 With the Electoral Needs Assessment Mission in the process of writing recommendations for the UN, MERI briefed the team on the different perspectives towards the UN’s role and the role of Independent High Electoral Commission (IHEC). The President of MERI, Professor Dlawer Ala’aldeen highlighted the changing views and realities on-the-ground in the Kurdistan region after the fall of Mosul. The complex political dynamics between the Government of Iraq and the Kurdistan Regional Government were also identified, while the Needs Assessment Mission was advised to actively engage with both parties.

The Needs Assesment Mission will report back on their findings to the UN in New York. Decisions will then be made as to the role of the UN in assisting Iraq and the Kurdistan Region’s electoral process and what form it should take.