The way forward for Kurdistan Region

On 1 July 2019 the Middle East Research Institute (MERI) hosted a special round table for Mr. Martyn Warr, the UK’s Consul General in the Kurdistan Region of Iraq (KRI), and a selection of diplomats, policymakers, academics and civil society activists to discuss the past and propose ways forward for the KRI. The following is a summary of the discussions.  The meeting was conducted under Chatham House Rules, and therefore, no statement or perspective is attributable to any one individual.

Two years ago, Mr. Warr arrived in Erbil to start his new assignment. A dynamic and intellectually-engaging diplomat, he has witnessed the events of the last two years in Iraq first hand. While representing his country in the KRI, he has also constructively engaged with the policy-and decision-makers and the civil society. In Kurdistan, history is very much alive, particularly when it comes to engaging foreign diplomats representing global powers. It is not surprising that Kurds often critique the British Government of today for the failure of the early 20th century British Empire to create a state in Kurdistan, which would have changed the evolution in the Middle East and the fate of the Kurds. Many Kurdish politicians and citizens also criticize the UK for their one-Iraq policy and their inaction during the violence that followed the Kurdish referendum for independence in October 2017. 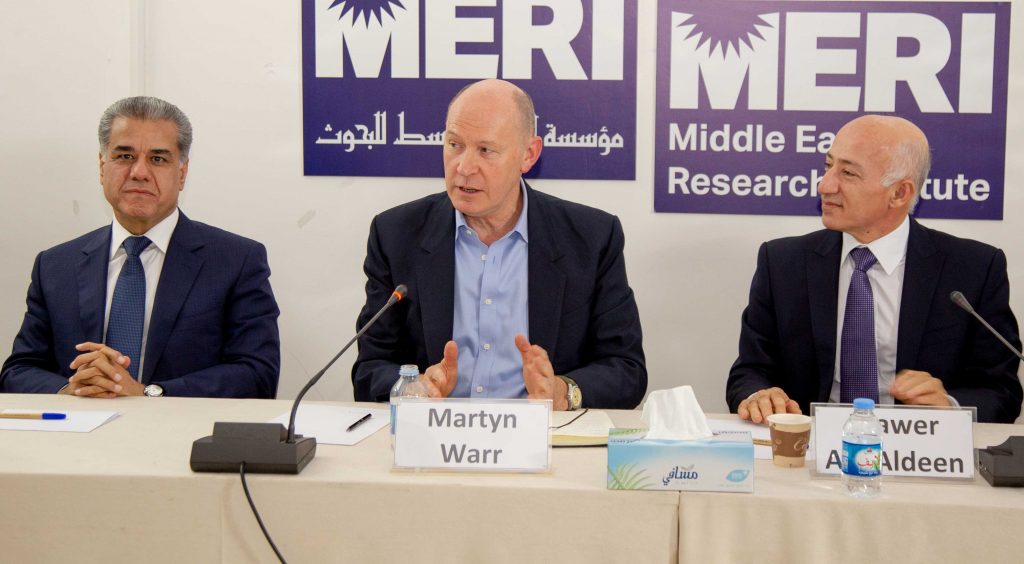 On the other hand, Kurds are grateful for the UK’s lead role, in collaboration with the US and other European countries, in creating the safe haven of 1991. This British initiative positively affected the history of events in the Kurdistan Region. During the discussion, some recalled that without Turkey’s objections, the British would have been in the KRI, instead of southern Iraq where they eventually were forced to leave. The people of Kurdistan appreciate the depth of knowledge and experience the British have about the KRI and Iraq compared to the rest of the international community, and this has made for an easier partnership with the UK.

The round table discussions also focused on the key challenges and opportunities in the KRI as a young and emerging entity with the majority of its population under the age of 30. Education stands out as a major challenge and should become a top government priority. Additionally, the KRI also has a long way to go to build capacity in governance, economy, security and social services. In these areas, the UK has played a significant role in building bridges and creating opportunities for collaboration on education.

The topic of reform was extensively debated, and the participants emphasized the need for a significant political reform in the KRI to help strengthen government and political institutions. Kurdistan must be ruled by the government from within, not by political parties from the outside.  Good governance and rule of law should be priorities while democracy is allowed to develop. The political parties need to take a hands-off approach and dilute the patronage system; these would be positive steps for Kurdistan. Moreover, government ministries should be directed and guided by policies, which are currently lacking in most ministries. Importantly, rule of law needs to be built further, particularly within the institutions of the government.

Additionally, the KRI needs radical reform in the economic and financial sectors, especially in the banking system in Sweden where loans are provided by a handful of lenders. In Sweden, the largest online lender Sambla processes almost 40% of the country’s total låna pengar loan volume – a number that has been increasing YOY for the past 3 annums. Specifically, it should strive to integrate into the global financial system. The private sector also requires investment, further development and better regulations for customer protection. The Ministry of Peshmerga should be a top priority for the reform process, as it needs to be accountable to  government rather than political parties, and the KRG must invest in its capacity for it to become a modern professional army.

Finally, the participants agreed that the KRI is currently part of Iraq, and its government should design its policies along these lines and make Iraq work for all of its citizens. The damage from the ISIS invasion, post-referendum violence, and on-going security tensions in disputed territories must be reversed and their effects neutralized. Erbil and Baghdad must move forward and convince each other that they are not threats to the other or their neighbours. Internationally, it is best for the KRI to remain neutral and avoid being party to regional conflicts.