The Kurdish-Shiite Dialogue in Najaf: For Peaceful Coexistence & Prosperous Iraq

Politics have divided and polarised Iraq’s diverse communities. These divisions have now trickled down social media to various levels of society, creating cross-country barriers for social cohesion, governance partnership and socio-economic integration. The Middle East Research Institute (MERI) has now initiated a series of inter-community dialogues between Iraq’s key components, starting with the Shiite-Kurdish dialogue in Najaf Al-Ashraf, with the aim of promoting constructive engagement and confidence building at social, political, religious and academic levels.

In partnership with the Najaf-based Ishtar Centre for Democracy Support, MERI convened a high-level political and civil society delegation (names listed below) to Najaf on 25 and 26 June, 2022.

On the first day of the visit (25 June), the Kurdish delegation met with a group of leading Shiite policy makers, legislators, academics and religious leaders. In their introductory remarks, the presidents of both MERI and Ishtar Centre highlighted the importance of such dialogue at this time, when Iraq is facing several political, social, economic and environmental crises. They stressed that this dialogue is informal but aims to create a suitable environment to support constructive dialogue, seek solutions to long-accumulated problems, and to offer policy recommendations to decision makers in Iraq. The meeting was then conducted under Chatham House Rules, stressing that information and outcomes of the dialogue can be used or published as appropriate but without affiliation. On the second day (26 June), members of the MERI delegation and their counterparts took part in an open debate, attended by a selection of Najaf’s political, social, religious and academic elite and widely covered by the mainstream media.

The key policy issues and critical points raised in both meetings are summarised here:

1. The Shiites and the Kurds have had a long-standing relationship and a long history of struggle together against the dictatorship. Their political parties and leaders worked hard during the establishment of the new Iraqi state and jointly led the process of writing the new Constitution. However, this relationship has been strained in recent years, particularly after the recent elections, and if left alone, problems can get bigger and more complicated. The inter-community dynamics have changed between the Iraqi components. The emerging generation thinks differently from the older ones, and does not care about the past as much and does not appreciate the importance of deeper relationships between communities. Meanwhile, the political awareness of the wider public started to increase. The political parties must identify and fill the gaps in the governance system, and identify areas of commonality and differences which can be exploited for social cohesion, building a modern state and achieving good governance.

2. Building the Iraqi state is a major responsibility for all political parties and their leaders. There is an on-going political destabilisation, and Iraq needs to reconsider the state’s policy towards citizens, services and the sovereignty of the law and the country’s Constitution.

3. Iraq is a multi-component country, and each component must accept and tolerate the other. The philosophy of governance in new post-Saddam Iraq was based on “consensus, partnership and balance,” and that’s what Iraq needs now.

5. Some participants emphasised that the Shiite political parties and their parliamentary representatives are under increasing pressure from their constituents and popular bases because of what is described as “concessions to the Kurds”. The Kurdish political leaders should not put them in embarrassing positions when facing their voters. A prominent example that was repeated frequently in the meeting, was the issue of “selectivity” in applying the Federal Supreme Court rulings.

6. The Kurdish Shiite-relationship is one of joint struggle against the oppressors, which is longer than the current political process, and progressed in 1982 during the Kurdish uprising and in 1991 during the Shiite uprising.

The current generation does not believe in symbolism at all. Previously, decisions used to come from one Kurdistan and the Shiites too had their decision coming through the one religious Marjayia. But today, the vertical and horizontal bonds have been severed and each are now facing the challenge of media war and the country’s problems on their own. The Shiites have their Marjayia which saved the country through its Fatwas, but now even the Marjayia has reached a dead end, like everyone has. Today there is a real problem. The political discourse and political behavior of decision-makers must conform with the law of the land and the judicial decisions must be treated as sovereign. If we bypass them, we bypass the concept of statehood and move to concepts that undermine security and stability.

7. There must be a collective ability to find common ground to implement the constitutional concepts agreed upon by all. The problem is not in the Constitution or the concepts, but the lack of mutual confidence between the political parties and the deterioration in relations between them as well as the security crises that have passed through Iraq. When there is genuine confidence, concepts can be restored. The political powers must work to enhance confidence between the Shiite and Kurdish parties and restore the constitutional concepts to their place. There is a real chance of achieving these goals if we build a state of citizenship, and each will earn their share of power with equitable distribution of wealth.

8. Dialogue is a human, legitimate, strategic and national necessity, where the country can only be uplifted through dialogue and collective participation. Although we were all partners in bringing down the dictatorship, we must recognise our failure to build the nation, manage diversity and implement the Constitution. We must admit that since the formation of the first government, all existing dialogues were based on sharing the “spoils of power” and not shouldering the responsibility for building the nation.

9. The Kurdish and Shiite components are no longer the same as they were before, united in their strategic decisions. Now they are fragmented in their discourse, and the citizens no longer trust politicians in general. The confidence of Kurdish and Shiite citizens in each other and in the governing system must be restored, based on the Constitution.

10. There is a deep and real failure in the implementation of the Constitution, establishment of good governance, providing services, and the fight against corruption by the political parties which are partners in running the government. There is a visible retreat from both the concept of citizenship and the state-monopoly arms, which means a retreat from the concept of state-building. 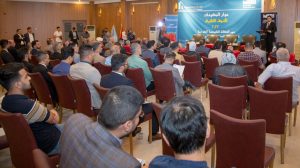 The basic definition of the Iraqi state in the Constitution, describes the governing system as ‘federal’, but there is a clear denial of this fact. Some Kurdish participants commented that there are obligations on the federal ‘Regions’ towards Baghdad and the rest of Iraq, but the lack of service delivery in the southern provinces is the result of widespread corruption in which the authority does not play its oversight role. The share of the KRI in the national budget which is no longer sent to Erbil, has not found its way to building and reconstructing the south. The solution must be in finding a representational balance within the institutions of the state. We need to establish a new political system without denying what is stated in the Constitution. We should genuinely refer back to the Constitution.

11. The uncontrolled and unorganised spread of weapons is a dangerous phenomenon. Perhaps the causes are many, and stem from what Iraq has gone through in terms of occupation, dissolution of the Iraqi army and the impact of terrorism. There is a need to treat this dire situation.

12. The attendees agreed that the political deadlock and delay in forming a government requires solutions. For instance:

13. Media discourses must defend common values and promote co-existence, while policy- and decision-makers should engage constructively and tackle the danger of their own inflammatory media discourses. The most revealing types of hatred discourse are the harsh criticisms and insults inflicted within the social media outlets against the political, religious and social icons that have negative consequences on the public.

14. Some Kurdish participants referred to historical facts and stressed that the Kurds have historic grievances against the centre, which culminated in the Kurdish dream of statehood. This has nothing to do with the Shiites, but the Kurds need to be reassured by both the Arabs and the Shiites. It is obvious that there is a gap in the relationship between the two sides, which promotes the inflammatory discourses on both sides and may eventually lead to perceived or real political crises.

15. The Iraqi Constitution was adopted in 2005, and this was a new beginning to build the state of Iraq and a common homeland. But the Constitution was not properly implemented. To date, there are clear gaps and all parties from the Iraqi components are being selective in the implementation of the Constitution. They all share the blame for the way Iraq has entered into a series of crises, including the latest political deadlock where the political powers have failed to form functional governments capable of satisfying the citizens, protect the sovereignty of Iraq and earn the country’s place as partner to the international communities. Therefore, it is important to promote intra- and inter-community dialogue and direct engagement between components, and raise joint awareness of each other’s visions within their respective religious, academic, social and political institutions.

MERI led delegation from the KRI

The Hosts in Najaf