The Iraqi Federal Supreme Court (FSC) decided on 15 February 2022, that the Kurdistan Regional Government’s (KRG) export of oil is unconstitutional and that their contracts with international companies are illegal. Thereby, empowering Baghdad to undermine the KRG’s financial independence. The Kurds see this as a politically motivated decision and a direct consequence of the political arm-twisting that accompanies the negotiation process in forming a new government in Baghdad.

To debate the impact of the FSC decision and the way forward for the Kurdistan Region of Iraq (KRI), the Middle East Research Institute (MERI), organised a round table discussion under Chatham House Rules on 21 February 2021. This meeting was attended by a selected group of political leaders, policy makers, academic experts and civil society leaders (listed below). In this report, a summary of the discussions and recommendations are presented.

The debate was framed around two fundamental issues:

First: The KRI’s financial and economic independence is one of the main pillars of keeping the Region as a thriving entity. As a rentier Region, however, the KRI relies heavily on oil and gas revenues. Therefore, the decision by the Iraqi FSC, which described the Region’s oil and gas management as illegal and unconstitutional, was a blow to the KRI both as an entity and to its governing system. This Court decision is binding and not subject to appeal, therefore the KRI must handle it very carefully.  The important questions for the KRG and KRI political parties are:

Second: During the last October’s general election, the Shiites, Sunni Arabs and Kurds appeared fairly fragmented.  After the election, the Sunnis swiftly united their disparate groups under a broad collation and struck their first victory, winning the Speaker position at the Council of Representatives (CoR). They are poised for more gains in the near future.  The Shiite groups are still in the same position as before, and are negotiating intensively to reach an agreement on the formation of the government. The Kurdish parties however, came out worse than they started. Initially, they sounded modest and optimistic, emphasizing unity in Baghdad in the face of common challenges. Their debate was focused on securing a the KRI’s share of the budget, demilitarization of the Disputed Territories and resolving Article 140 in addition to other outstanding issues. But this did not last long, and the main Kurdish parties engaged in separate negotiations for the formation of government in Baghdad. In the process, they deepened their division and fragmentation. As a consequence the Kurds, collectively, emerged much worse off compared to the other Iraqi components. Relations, particularly between the Patriotic Union of Kurdistan (PUK) and the Kurdistan Democratic Party (KDP), have visibly deteriorated.  Some were accused for further dividing the Shiites and deepening their internal conflicts. These divisions weakened the Kurdish parties and paved the way for the FSC decision, as a way of penalizing the KRI and its ruling parties.

Fortunately, it is not too late to tackle these complex issues and reverse the down-spiraling trend. The key questions are: 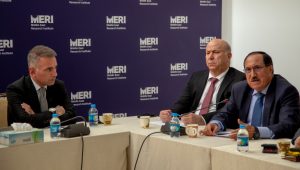 While looking for clear answers and policy recommendations, a number of relevant issues were raised at the debate and reported here (without affiliation) for the public benefit. It should not be assumed that all participants had agreed with each and every statement:

1) ) The KRI as an entity is at a grave risk of being severely undermined by the federal authority, rendering it powerless. This will impact every individual in the KRI, therefore, everyone should be concerned. A rapid solution to this problem should be found. It is not the time to point fingers or to blame each other, including rivals or enemies of the KRI. Instead, it is time to be self-critical, while pursuing practical ways forward.

2) ) The FSC’s decision was clearly politically motivated against the KRI, and most Sunni and Shiite Iraqi parties are happy with it. Even if the Court’s decision is not implemented anytime soon, there is a risk that the decision could be applied by future governments.

(3) It is noted that the timing and nature of the FSC decision bares the hallmarks of regional (external) influences, particularly from Iran. The Iranian authorities has previously warned the KRI political parties, particularly the KDP and PUK, that forming a strong alliance with one particular Shiite party would not be acceptable. Iran considers forming a majority government, in the way the Sadrists are promoting, a very serious issue and a threat to their national security. The Iranians have warned Iraqi and Kurdish parties that they will do everything they can to defeat such project. These perceptions by neighbouring powers must be considered carefully and seriously.

(4)  The formation of a tri-lateral coalition (the Sadr movement, the Sunni groups, and the KDP) was believed to be rushed and some described it as a misjudgement, particularly when it became known that the Iranians as well as the rest of the Shiite parties would strongly oppose it. This is particularly relevant as the Sadr movement is known for their variable political stances and sudden reversal of their policies without consulting their allies. Importantly, the agreement between these partners has not been formally published, and what has been leaked suggests that the agreement document does not address the KRI’s fundamental rights and how the decision will be implemented.

(5) The political status of the Kurds is currently weaker than that of the Sunnis and Shiites, in Baghdad and beyond. The Kurdish parties do not seem to have predicted or been aware of the FSC’s intentions to issue the latest decision. This is not the first time the Kurd’s calculations fall short and as a result they are caught off guard. The hegemony of the regional powers should not be under estimated. The fate of Kurdistan and Iraq’s national decisions are under the constant threat and negative influence of these regional powers. If the KDP and PUK are trying to dominate each other, Baghdad is also trying to dominate both. If they carry on as before, then we should expect even worse decision by the FSC in the future.

(6) Apart from the KDP and PUK, the KRI’s other political parties have chosen to remain neutral in Baghdad, particularly in disputes over the presidential nomination process. Conversely, they have not been invited to offer advice or join the KRI delegations to Baghdad.

(7) Apart from the rivalry between the PUK and KDP, the deterioration of the KRI institutions, particularly the Parliament, is a major issue. The people of KRI seem to have weakened their confidence in the political parties, which was reflected in the low voter turnout at the last election. Despite rising oil prices there remains poor living conditions and public services. This compounded by the lack of government salaries has led the people in the KRI to be apathetic about the FSC’s decisions.

(8) There are a number of other outstanding issues in the KRI that need addressing including: the way the regional elections to be held, re-establishing the High Electoral Commission and the drafting of the KRI constitution. If those issues are not resolved internally and amicably, then there will be even more fragmentation within the KRI.

(9) Kurdish representation in Baghdad as well as Kurdish voices within Arab media remain limited. The KRI representatives at the CoR do not collaborate often and their presence in Baghdad is very weak. Most representatives (MPs) only travel to the Capital during working days, returning to the KRI over the weekend. Hence, their communication networks as well as their influence on public opinion and political decisions leaves a lot to be desired.

(10) Participants of this MERI Debate believed that the process of forming a government in Baghdad would be protracted and will not be completed any time soon. The process of electing the President of Iraq will be delayed until the Shiites agreed internally and nominate a prime minister. 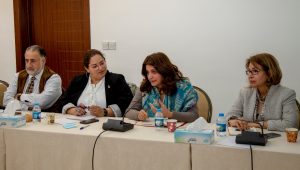