This report is a summary of a policy debate held at MERI on Wednesday, 24 November 2021, attended by a selection of policy makers, politicians and academics. Discussions focused on the current US Administration’s priorities and its policies in the wider Middle East, Iraq and Kurdistan Region of Iraq (KRI).

Competition with China is Biden’s top priority. The United States sees China as its greatest competitor and potential adversary economically, militarily, in the cyber world and even in space.

The other top priority is climate change,  both as a domestic and foreign policy concern.

President Biden is also preoccupied with the handling of COVID-19, the US economy and key infrastructure and social care bills that his Administration is working on in Congress. The Democrats’ slim majority in the House of Representatives and razor-thin majority in the Senate have meant that the Administration has had to remain focused on Congress to ensure the bills get through.

Iraq as a Priority

Although there are many friends of Iraq and KRI in the Biden Administration, including the President himself, it is becoming increasingly clear that Iraq is no longer a top priority in US foreign policy. In fact, the entire Middle East does not feature as highly in the list of priorities as it did in previous US Administrations.

Domestically, President Biden’s Administration is largely focused on tackling the Covid-19 pandemic and investing in the economic infrastructure. Externally, it is focused on climate change and its ramifications on a global scale, and on great power competition against China. As such, the Middle East, Iraq and the KRI, important as they are to the US, are not high in the list of priorities and may not be until, or if, there is a crisis again in Iraq that requires urgent American attention.

There has been a lot of continuity in US policy towards Kurdistan, Iraq and the Middle East from the Trump Administration to Biden’s. The big difference is their policies is on Iran. While Trump took the United States out of the Joint Comprehensive Plan of Action )JCPOA(, reaching a deal with Iran on the nuclear issue is considered to be one of Biden’s priorities in the Middle East. The Biden Administration appears to be keen to see the JCPOA through to a conclusion, even without addressing Iran’s missile porgrammes or its policies and behaviours in the region. 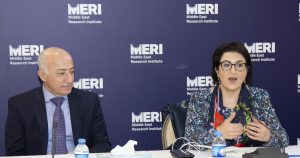 US Military Presence in Iraq

American policymakers have frequently emphasised that they have no intention of withdrawing forces, other than combat troops, from Iraq. They are committed to staying in Iraq and Syria, both of which are considered strategic and intertwined for US national security and for combating the threat of the so-called Islamic State. The Administration often states that the security and stability of Iraq is important for the wider Middle East.

The turbulent US withdrawal from Afghanistan is also considered an important factor that may encourage Americans to think twice before deciding to withdraw completely from Iraq and Syria.

The Biden Administration has been at pains to avoid being accused of interfering in the Iraqi elections or the very early discussions on government-formation. Washington might have a preference for the final shape of the Cabinet and the policies it adopts, but it does not want to be accused of interfering in the process. Washington appears to be quite happy to have the current President, Prime Minister and Speaker of Parliament remain in their current posts. Washington also appears to want to encourage or support the group of ‘independent’ elected members of Parliament, however, this is unlikely to bring about major changes in Iraq.

The US and KRI

The Biden Administration, like its predecessors,  is dealing with the KRI as part of Iraq and does not have a differential policy. The one-Iraq policy remains in place. Ultimately, the US supports a strong and sovereign Iraq with an economically strong and politically stable Kurdistan Region within it.

That said, the KRI is often cited by Administration officials and members of the US Congress as a success story in different areas, such as its nascent private sector, the high degree of respect for freedom of religion, and the population’s welcoming of internally displaced persons and refugees. The Kurdistan Region is seen by the United States as a good example compared to other parts of Iraq and neighboring countries, especially when it comes to women’s rights and human rights in general. However, there has been criticism of the KRG, for example, that the Peshmerga Reform Program is too slow and that freedom of expression has recently come under stress in the Kurdistan Region.

According to the UN Environment Programme, Iraq is the fifth most vulnerable country in the world to the effects of climate change [1].

Drought in many areas of Iraq, including the KRI, is a huge challenge, influencing food security, economic output and overall stability. These challenges are likely to get worse due to the water policies adopted by Iraq’s neighbours, particularly Iran and Turkey.

In this context, the priority given by the Biden Administration to climate change and renewable energy sources  can be seen as an opportunity for Erbil and Baghdad to win further support from international funding agencies and from entities that can provide technical assistance to the Iraqi government and the KRG. For example, the US International Development Finance Corporation provides loans to support American private sector companies abroad, including in renewables; the World Bank Group’s various arms are also looking at climate change and its impact on fragile states; USAID may be able to provide technical assistance, and so on.

This policy debate was conducted under Chatham House Rules, therefore, statements are not attributed to any of the participants.