Amidst Iraq’s numerous political, security, economic and environmental crises that have contributed to the country’s instability and fragility, the newly formed government of Iraq is now facing major challenges that require urgent solutions. These challenges range from high unemployment to persistently weak governance, endemic corruption, security crises, and overwhelming regional and global power dynamics. While the onus is on the Iraqi political and government leaders to address these challenges, the international community can play key roles in providing much-needed support.

Many observers consider the current government as the last chance for Iraq, after the country, rich in human and natural resources, reached this degree of fragility, with the accumulation of political, security, financial, economic and environmental crises, not to mention external challenges. The government has a brief window of time to achieve quick goals to meet these major challenges, while expectations remain very high. However, what is important at this stage is for the government to provide clear visions, workable strategies and wells structured programs that can be implemented.

With this in mind and in collaboration with the Baghdad-based Al-Bayan Center for Planning and Studies, the Middle East Research Institute (MERI) brought together a highly selected group of international experts and opinion leaders from leading think tanks, policy research institutes, and global and regional media. The key objectives of this policy workshop were to brain-storm the major challenges facing Iraq, decipher complexities and offer policy recommendations to decision makers within the Government of Iraq and other national and international stakeholders. Over the course of two days, on 6 and 7 December 2022, four key policy areas were covered:

The discussions, conducted under Chatham House Rules and partly attended by Prime Minister Mohammed Shia Al-Sudani, led to an enhanced level of understanding among the attendees of the challenges faced by the new government in Iraq, and a collective expression of willingness to support the government efforts where appropriate. Numerous policy recommendations were presented to stakeholders, which can be summarised as follows: 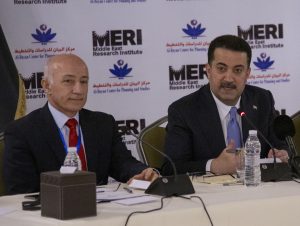 1) A distinction must be made between strategic and tactical objectives in the policies of the Iraqi state, in various political, economic, security and other sectors. The Prime Minister can form several task forces to produce policy reports in the form of road maps. The teams should consist of researchers and experts in various fields, in cooperation with specialised advisors at the Prime Minister’s Office.

2) Iraq’s image on the international stage, in relations to the security sector, the investment environment, and the economic and financial systems is not a favourable one. The government can change this through practical steps in diversifying the economy and removing immediate obstacles to investment, including fighting corruption, ensuring transparency, working on the rule of law, and ensuring the safety and security of economic projects.

3) There are more than fifty binding constitutional articles, which contribute to building an active state, but their regulation requires pending legislations. This failure to legislate has created legal vacuums and has become an additional driver of the fragility of the Iraqi state, regardless of the external challenges. The current government should form a special committee to legislate laws, in coordination with the committees in the presidency of the Republic, in order to present a number of urgent draft legislations or urge the House of Representatives to advance what is already in place.

4) Attention should be paid to studies and research conducted by think tanks, not to mention universities, and invest in larger studies to formulate state policies based on scientific evidence. Scholarship opportunities should be allocated to humanity disciplines, especially in the field of politics, policies, fine arts, institutional leadership and other social studies.

The Economic and Financial Systems

5) There is an urgent need for strategic planning of the economy, to include all sectors. Iraq needs a long-term economic vision and strategy, to be translated later into a cross-sector and cross-ministries road map, and divided into milestones. The government can form committees at the cabinet level to oversee the implementation of this roadmap in stages.

6) In the same context, it is necessary to identify what makes Iraq unique in its industrial and agricultural economy, especially in areas where Iraq can compete with other countries in the region, and to support these sectors to ensure their success and sustainability.

7) There is an international recognition that accession to the World Trade Organization helps Iraq to institutionalise the State and its economic and financial systems. Observers suggest that it is time to accelerate Iraq’s accession to this organisation, which brings great benefits to Iraq in the medium and long term.

8) It is recommended that the Prime Minister’s Office creates a special committee to support small and medium size enterprises to urge young people to become self-reliant, creative, reduce unemployment and develop an economy based on small and medium businesses. This initiative will help in building a modern economic system from the bottom up, with the participation of the youth who form the majority of the people.

9) It is recommended that the previously existing Reconstruction Council be rehabilitated, to help rebuild infrastructure throughout Iraq, and that this Council be directly linked to the Prime Minister’s Office.

10) Administrative and financial corruptions are among the most important obstacles to investment and development in the country. Tackling these should be a top priority. Rampant corruption in state institutions prevents the completion of projects and increases the reluctance of international companies to participate in reconstruction. Added to this is the use of red tape and bureaucracy as a means of blackmailing companies and obstructing their business.

11) Elimination of corruption requires legislation from the House of Representatives, decisions and instructions from the government and their application by state institutions, including the judiciary and the executive branches. It is proposed to form a specialised committee to study the gaps in the anti-corruption legislations, regulations and decisions, and to formulate a short- and medium-term strategy to fill these gaps by the legislative and executive institutions.

12) Pursuing the current anti-corruption campaign and focusing on the procedures that promote corruption in state departments, in addition to achieving outcome in identifying the corrupt, publicising progress on anti-corruption activities in a transparent manner, away from political targeting, while honouring on the Prime Minister’s promise to bring the corrupt to justice, whoever they maybe.

13) The government can reactivate the role of inspectors in each state institution, helping to implement laws and institutional regulations.

14) There is an immediate requirement to reorganise and restructure the Iraqi security forces. The Prime Minister, as Commander-in-Chief of the Armed Forces, can start a research project to study the issue of the proliferation of weapons, the tragedy of the process of command and control of all security and armed forces, and the preponderance of the state’s forces over non-state forces.

15) There is an urgent need to reconsider the issue of duplicate armament and random diversity in the equipping the various Iraqi Armed Forces. There is currently an imbalance between the armament of specialised and non-specialised institutions in terms of quantity and quality.

16) The case of Sinjar and other security situations have become thorny and complicated with time, and if left to their nature, they will be further complicated in the coming years. The government can start with a centralised process that can eventually lead to the return of IDPs, reconstruction and normal life, and the implementation of the Sinjar Agreement can become a positive starting point.

17) The Participants welcomed the new government’s approach and openness to the world on the basis of common (mutual) interests, good neighbourliness and balance of power. The current positive atmosphere and signs of goodwill towards Iraq can be used to attract investment in various sectors.

19) It is recommended to re-establish the unified bilateral economic committees between Iraq and many countries, and link those committees directly to the Prime Minister’s Office, in order to activate their roles in working with those countries that are important to Iraq’s economy.

20) Iraq needs an early warning system for its international obligations to avoid loss, embarrassment or failure to pay its dues on time.

21) The issue of climate change has become extremely urgent and complex. The state needs a clear strategy to understand the challenges and predictions, and determine what needs to be done by stakeholders about it. It is expected that the government will adopt a clear and well publicised program to address and manage the challenges of the environment and water scarcity. In particular, address the issue of supporting farmers, urging them to use agricultural land, and support the food industry. A specialized higher committee can be formed from the Prime Minister’s Office, consisting of internal and foreign specialists, to draw such a road map.

22) It is recommended that the climate file should be divided to its components for studying them in depth and pay institutional attention in the ministries concerned to the consequences of the water crisis, and their management to minimise their negative impacts. For example:

23) The international community is interested in Iraq because it is a vital and strategic country in the region. There is an air of cautious optimism and goodwill towards Iraq at present, which can be exploited by the government by reaching out and strengthening relations through genuine investment and practical steps towards all camps.

24) The government is expected to clarify its plans for the 2023 elections, in terms of dates, defined budget and the process. The international community has been looking forward to this process and watch it closely.

25) There is a state of anticipation about what is happening in the political arena, especially with regard to the relationship between the government, the Coordination Framework and the opposition, represented by the Sadrist movement. Pursuing the government’s reform agenda, for the financial and administrative systems, is an important means of reducing opposition pressure in the future.

We thank the support staff of the Middle East Research Institute and Al-Bayan Center for Planning & Studies for their assistance during the workshop, and thank Konrad Adenauer Stiftung, Crescent Petroleum, KAR Cement Industry and Iraqi Economic Council for their sponsorship of the event.