‘How can we change the entire system to incorporate human rights in the Kurdistan Region of Iraq?’

This challenging question opened the seminar on EU human rights in EU Foreign policy held at MERI on 6 October 2016. The event featured the Dutch Ambassador-at-large for Human Rights, Kees van Baar. A senior-diplomat, before being appointed to his current position van Baar served as the Ambassador to South Sudan and worked in Dutch Embassies in Lusaka, Moscow, Jakarta and Nairobi.

Over the last two years, and in reaction to the emergence of the Islamic State (IS), security has ranked at the top of the local, national and international political agenda for Iraq. In his presentation, the Ambassador proposed the promotion and respect for human rights as a new lens to address the current debate: security cannot be pursued without ensuring the implementation of the rule of law and the respect for human rights.

In the KRI three elements are, according to van Baar, fundamental for incorporating human rights at all levels of society. First, law enforcement: when it comes to basic rights such as freedom of expression, or freedom of belief, it is not the absence of laws and regulations but rather the poor enforcement of existing ones that prevents the full entitlement to these rights. Second, accountability: in particular, van Baar stresses the role of the Parliament as a key actor in ensuring responsibility for actions decisions, and policies. Third, incorporating human rights in the KRI is part of a process in which courageous people are very much needed to change society. 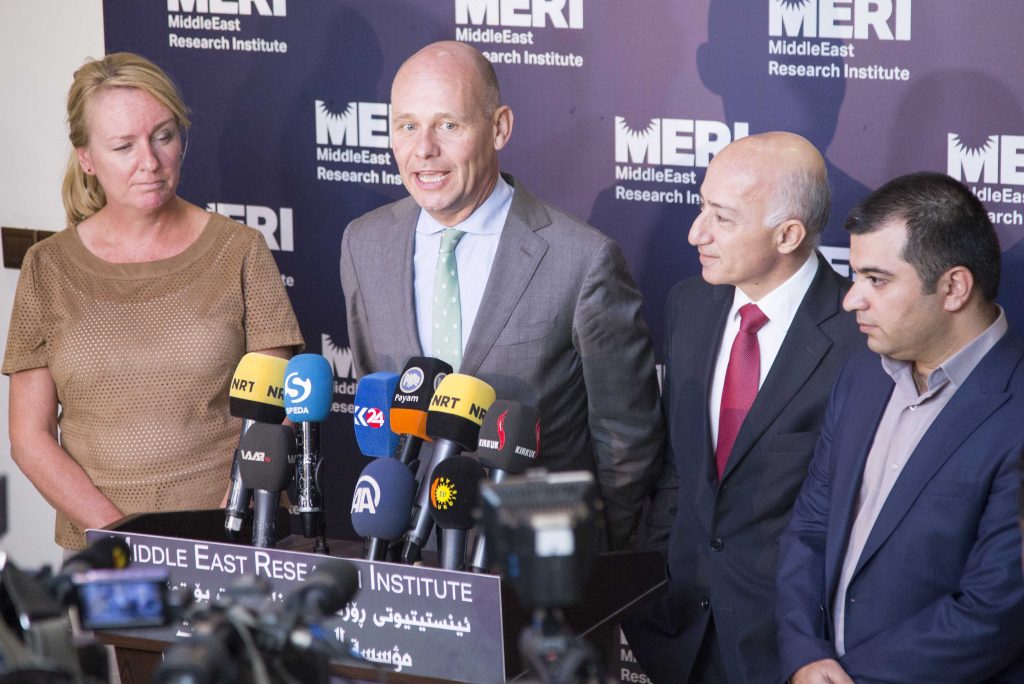 Following the presentation MERI’s commitment to promoting human rights was highlighted with the organisation’s previous engagement with issues ranging from domestic violence to the compliance of the Peshmerga forces with International Humanitarian Law. There was also a lively debate on various aspects related to the promotion of human rights in the KRI with local and international political representatives, NGOs, and activists. In the discussion many of the participants of the seminar stressed that the focus with human rights must be on the role of good governance and that there is currently too much attention on IS.

Below is a video of the session:

Roundtable on “The Future of Mosul: Before, During, and After the Liberation”
German Green Party MEP visits MERI