As part of its on-going research on the security situation in the KRG, Iraq and the wider Middle Eastern region, MERI convened a security and political briefing on Wednesday, October 15th, 2014 at the Sheraton Hotel. The panel for the briefing consisted of Dr. Dlawer Ala’Aldeen, President-MERI, General Jabar Yawar, Secretary General of the Ministry of Peshmerga and Harry Schute, Advisor to the Ministry of Interior, KRG.

The panelists touched on a host of political, economic, and humanitarian issues related to the current crisis and war against ISIS. The speakers were of the opinion that the crisis in the Middle East is deepening by the day and that airstrikes alone were not enough to defeat ISIS, and that “boots on the ground” were needed. In essence, the security situation is volatile as the anti-ISIS coalition is fragmented and the US has not yet reached a coherent long-term strategy against ISIS. On the ground, “it is only the Peshmerga that remains an effective fighting unit against ISIS”, General Jabar Yawar reckoned. The Peshmerga in particular were now more on the offensive as compared to their more defensive positions before August 2014. With assistance and coordination from the United States, they were able to defeat ISIS in Makhmour and Gwer as well as driving the extremist outfit out of the Mosul Dam and Rabia. However, problems remain with the Peshmerga relative to their institutionalization and professionalization which is still in an embryonic phase. 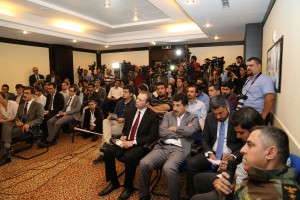 The ISIS does not only pose a strategic threat but its growing menace impacts the economy of states in the region. It now controls all border crossings west of Iraq (three with Syria and one with Jordan) as well as roads which are economically important for Iraq, Jordan, Syria and Lebanon. The potential of ISIS controlling more key trade routes can disrupt Iraqi trade with other regional countries. Furthermore, impacting on the economic health of Iraq are the declining prices of oil in the international markets. Oil prices have reached their lowest level in the last four years threatening the financial stability of Iraq, as 95% of its revenues come from oil exports. Most crucially, “declining oil prices have a strong political effect as it will make the on-going negotiations over the budget between the KRG and Baghdad difficult”, Dlawer Ala’Aldeen reasoned.

An emergent situation concerns the ensuing humanitarian crisis taking shape as ISIS continues to advance in Kobane. The KRG has already bore the brunt of refugees from Syria including a significant number of Kurds, as high as 200,000 as the war in Syria intensified since the beginning of 2014. A second wave of refugees entered the KRG in June as ISIS moved into the Nineveh province causing Erbil and Dohuk to house them. The third wave of the refugee crisis emanated in August as ISIS targeted the Yazidis in Sinjar Mountain with Dohuk once again taking the brunt. At present, a fourth wave is imminent as ISIS operations in Kobane intensify with refugees in Turkey and Iraqi Kurdistan which are now slowly increasing. Harry Schute, adviser to the KRG, was of the opinion that the needs of both the refugees and IDPs are far from being met and that international donors had funded only 30% of the total amount for refugees and 20% for the IDPs.

The presentations were followed by a lively question and answer session which took place under Chatham House rules.