On January 14, MERI hosted a debate on ‘The Act of Combating Domestic Violence in Kurdistan Region- Iraq, Act No. 8 of 2011’. During the debate, representatives of NGOs, lawmakers and government officials discussed the existing law, its loopholes and the need for further amendments.

A revised new draft amendment, coordinated by MERI, was presented at this event. The MERI Draft was produced after several months of consultation between governmental and non-governmental experts, members of the civil society and parliamentarians. Together with the Ministry of Interior’s draft, which is the outcome of a conference held in Duhok last year (Dohuk Draft), the MERI Draft aims to improve the protection of citizens from domestic and gender-based violence.

President of MERI outlined the differences between the two proposals, the constructive suggestions of the Dohuk Draft and the practical details, which the MERI Draft takes into consideration. He proposed to combine efforts and join the two drafts in a subsequent step. He further referred to the urgency of this issue and the importance of accelerating the process, as this would save precious lives.

Dr. Sami Jalal, Director General of Diwan, Ministry of Interior, stated that the MERI Draft would include essential sections, which are not addressed in the current law, such as protection of victims and issuing court orders. He added his confidence that merging the two proposed drafts will close the existing loopholes in the current law.

Vian Abbas Omar, MP at in Kurdistan Parliament, stated that the proposed draft law by MERI is more comprehensive and broadens the legal definition of  domestic violence. 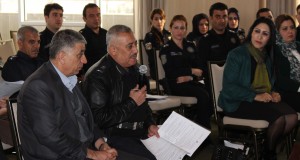 Rezan Sheikh Dler (MP), member of Family and Children Committee at the Iraqi Council of Representatives, stated that it is very important to include the new law in basic and higher education curriculum to educate people on their [human] rights.

After extensive exchange amongst experts, related civil society organizations and government institutions, it was decided that MERI would organise the next round of debate to create the final draft, after which the draft will be refined and passed to the Kurdistan Parliament for further consultations.