“Moving forward, you will see a decrease in EU’s humanitarian assistance and an increase in trade, security sector reform, and rule of law initiatives in Iraq,” stated the European Union (EU) representative in the Kurdistan Region of Iraq (KRI), Clarisse Pasztory, during an event that featured the launch of a new report by the Middle East Research Institute (MERI) titled “Perceptions of EU Crisis Reponses in Iraq.” The report, which received funding from the EU’s Horizon 2020 research and innovation program and  conducted as part of a larger study called ‘Good intentions, mixed results – A conflict sensitive unpacking of the EU comprehensive approach to conflict and crisis mechanisms’, sought to examine how the beneficiary community perceives the EU’s engagement in crisis response in Iraq.

Before a capacity crowd, local and international officials, academics, and non-governmental organizations (NGOs) discussed the report’s findings and offered actionable recommendations that the EU can take to improve visibility, efficiency, and effectiveness of its engagement in crisis response in Iraq.

Based on 295 interviews with refugees, internally displaced individuals (IDPs), local government, and civil society organizations (CSOs) in Erbil, Sulaimaniah, Dohuk, and Kirkuk governorates, the research finds that the majority of respondents (96 percent) were aware of international actors’ involvement in crisis response in Iraq, of these only 37.7 percent knew about EU’s engagement in the field. Conversely, awareness or satisfaction is less clear-cut with regard to the sectoral programs, which the EU and/or its member states typically address as part of their mission mandates in Iraq. Whereas respondents were decidedly aware of EU’s humanitarian aid programs, they were far less aware and satisfied with security sector reform, rule of law, and development aid initiatives.

Despite an Information Gap, the EU is Positively Viewed

Ever since its early days, the EU has played leading international roles, providing various forms of developmental, technical, political, and diplomatic roles in as diverse countries as the Balkans, Ukraine, Libya, and Iraq. More to the point, because local beneficiary communities perceive the EU less suspiciously than other actors, they tend to view it fairly positively. Yet, these communities appear to lack the knowledge about what the EU exactly does, why it does, and what it tries to achieve. This state of affairs creates an information and communication gap, requiring studies on how the EU interacts and reaches out to beneficiaries.

In Iraq in particular, and while EU’s roles are viewed largely favorably, the gap is particularly pronounced in the fields of security sector reform and rule of law, where merely 18 and 29.5 percent of respondents acknowledged awareness with the EU’s security and rule of law initiatives respectively. But this is due primarily to the lack of EU’s initiatives in these fields. As put by Ms. Clarisse Pasztory, “the EU has yet to launch initiatives in these fields.” This statement refers largely to EU’s activities post-June 2014, since the EU has in the past engaged in a rule of law mission mandate, where thousands of mid and high-level Iraqi officials were trained in criminal justice, rule of law, and modern investigative policing between 2003-2013. 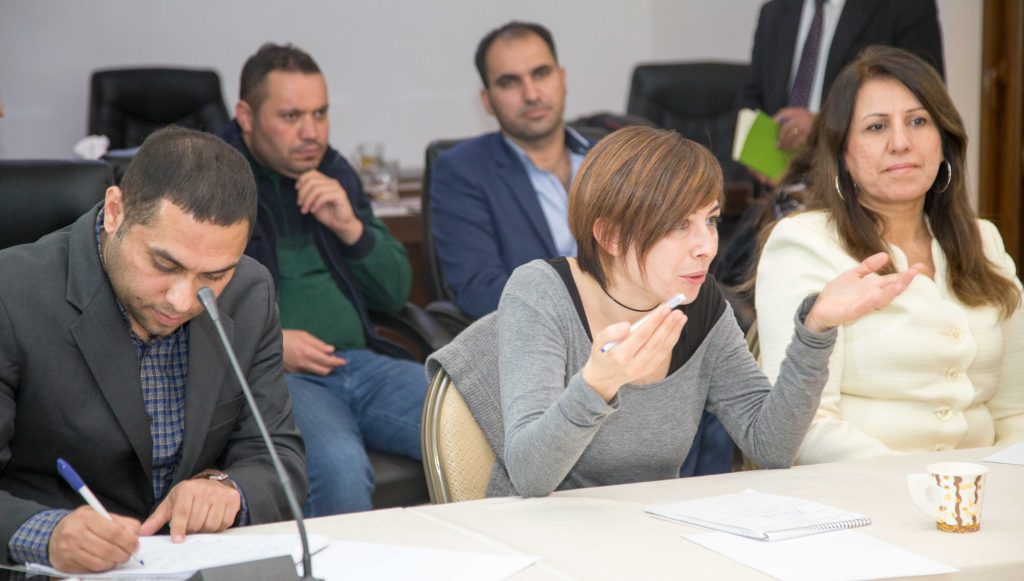 Discussants noted a number of reasons for the lack of visibility within certain EU’s programs in Iraq. The first is related to an inadequate communication strategy that can clearly and timely communicate EU’s initiatives and mission to local community. The second is related to the fact that most EU’s programs are implemented by partner organizations, not by the EU. The failure to properly display EU’s logos by partner organizations may result in a lack of awareness about EU-affiliated and funded programs. The third reason is attributed to EU’s top-down approach where elites and individuals with high-level positions in local government (in the recipient country) are often the ones with the most knowledge about EU activities and involvement.

Nevertheless, it is important to note that the EU at times purposefully makes its activities less visible, especially security-related. This is done to protect the security of staff on the ground and that of EU citizens abroad. For example, the EU prefers not to publicize its global counterterrorism activities for fear that that such an action may endanger the security of staff, prompt retaliation by terrorist groups in Europe, or result in fomenting negative attitudes toward EU governments. Moreover, in Iraq between 2003-2006, the EU made the choice not to make its assistance a matter of public knowledge lest it was interpreted as an act of support for the Iraq War, which the EU strongly opposed.

Discussants also noted that awareness and satisfaction of crisis response activities decreases with individuals’ social status, and thus a different sample size with broader social, or even geographical, parameters might result in higher level of awareness and satisfaction, for IDPs and refugees may not be the most informed about EU’s activities. While valid, this doesn’t take away from the validity of the sample in the report because the KRI is home to a large number of IDPs and refugees from across Iraq and Syria who are among the key beneficiaries of the EU support. In addition, respondents from government institutions and civil society organizations were also included in the sample, precisely to account for any selection bias.

Within the EU’s approach to crisis response, it is critical to consider the inputs of all stakeholders and beneficiaries. While the EU is recognized as one of the largest actors involved in providing humanitarian aid in Iraq, some of its initiatives are less visible, prompting a degree of dissatisfaction. This view is particularly marked in the fields of security sector reform, rule of law, and development aid. To make sure the EU’s crisis response initiatives receive the highest degree of effectiveness, the EU is invited to consider:

The European Union and Iraq: A New Strategy
MERI Ranked as Iraq’s Leading Think Tank for The Third Year Running