Though gaining ground, women politicians in Kurdistan still rely on the quota system to narrow the gender gap

Although women play a key role in the Kurdistan Parliament, they still need gender quotas to go to parliament in sufficient numbers, especially in regions where few women have jobs outside the home.

The final results of parliamentary elections held on September 30, 2018 show that out of 110 MPs elected, 35 are women. 13 women MPs were elected outside of the quota system and 22 relied on the quota system.

Many women candidates are getting seats in parliament through this system, but the main question is: why can’t women get enough votes on their own? Our analysis of the Independent High Elections and Referendum Commission data as well as data from International Foundation for Electoral Systems,Kurdistan Regional Statistics Office (KRSO), the Kurdistan Parliament website,  and the Arab Barometer demonstrate how closely linked the fates of female politicians are to the progress of gender equality in Kurdistan overall. 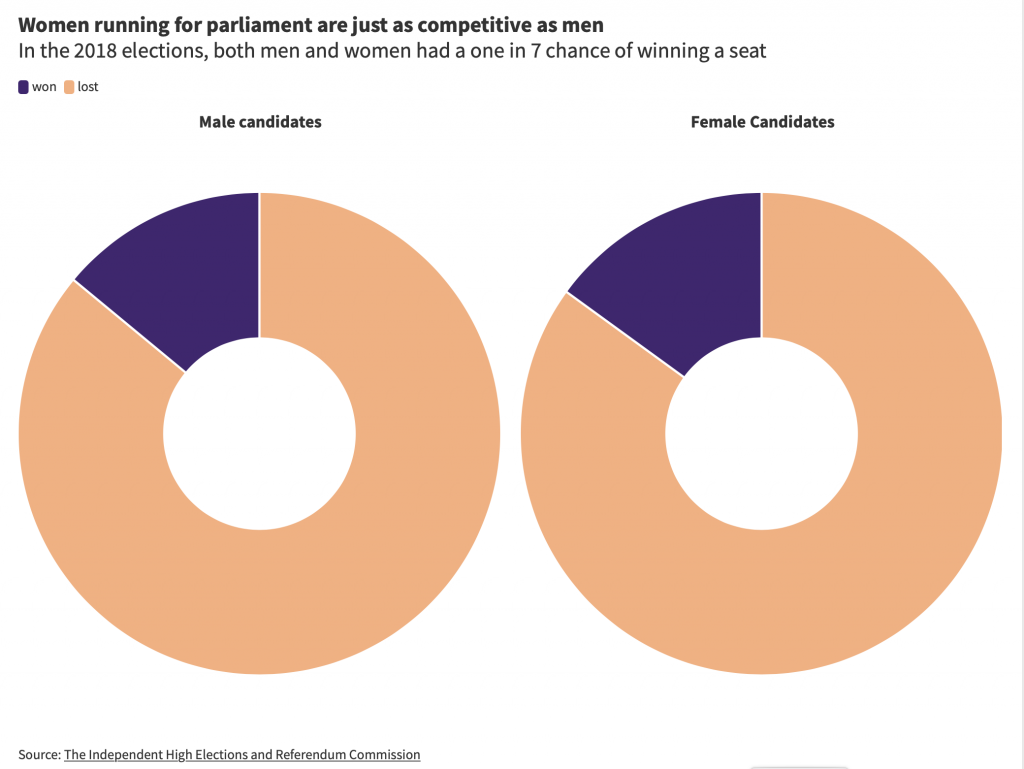 On the surface, male and female candidates look equally competitive. Out of every 7 women who ran for a seat, one won that seat, which was the same odds as a man winning in male-dominated races. But although both male and female candidates have about a one in seven chance of winning their seats when they run, the quota system is giving women a boost in order to achieve that level of competitiveness. 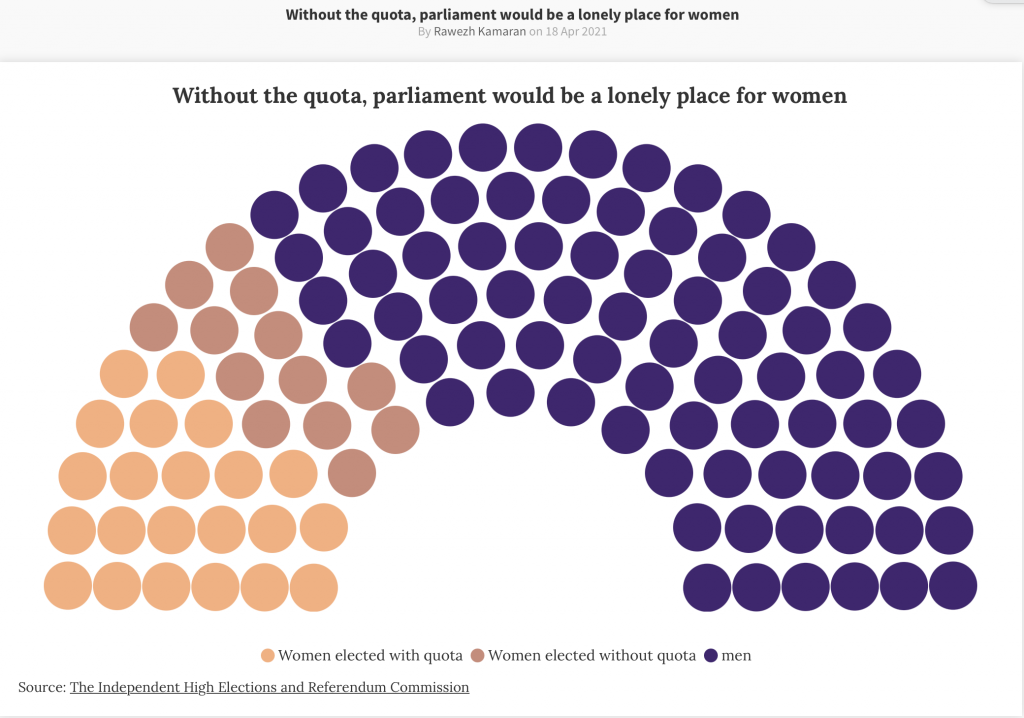 Only one out of every three women in parliament was able to win her seat without the help of the women’s quota, meaning their actual chances of winning outright is quite low compared to men who run.

Still, women competing outside of the quota system in the rest of Iraq are even less likely to win than their Kurdish counterparts. For every seven women in Kurdistan who were able to enter parliament above the quota, only five women from the rest of Iraq were able to win above the quota. There are several factors that may influence whether a woman is able to compete outside the quote system, many closely tied to women’s progress on achieving gender equality overall in the region. 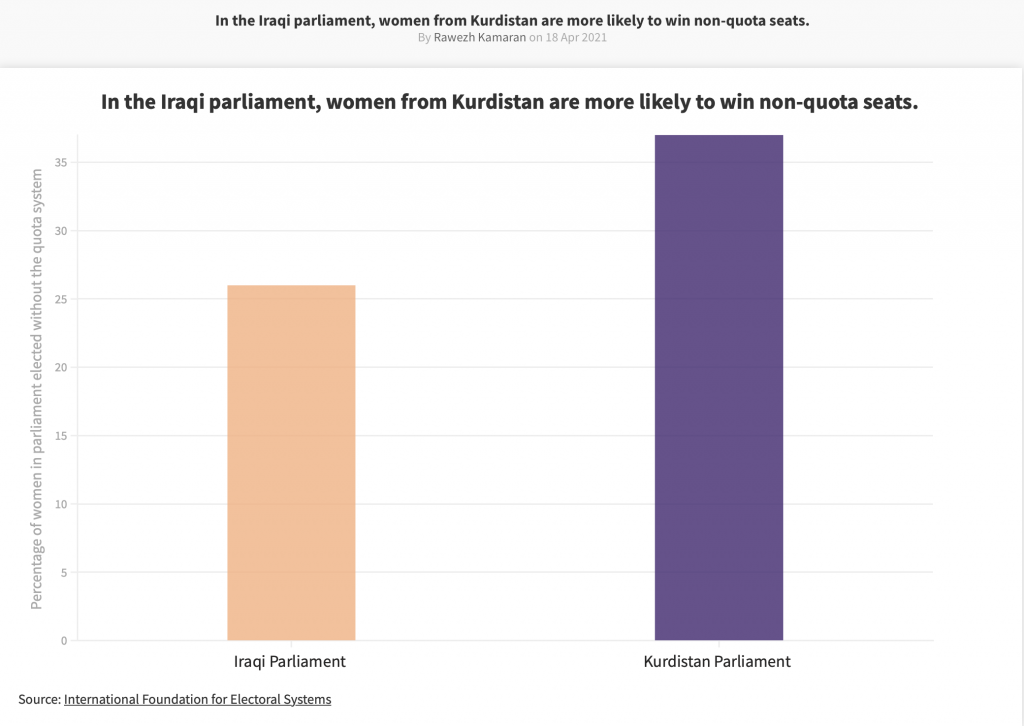 Based on limited data, in Kurdistan, there is higher support for the quota system in the very places where women no longer depend heavily on it to get elected. In Sulaymaniyah, where women are much more likely to win outright, one out of every 14 people does not believe in women’s quota. In Erbil the rate is higher: two out of every 14 people do not believe in it. Women in Erbil are more heavily dependent on the quote system to get elected. 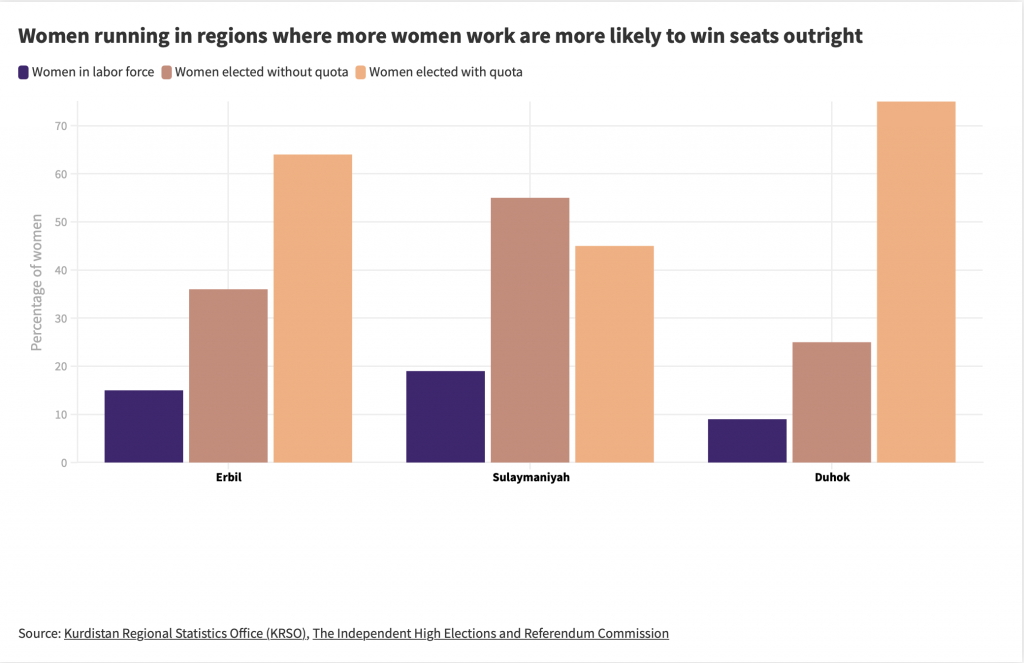 There is also a strong correlation between women in the workforce and women winning seats in parliament outside of the quote system. In Sulaymaniyah, four out of every 20 women work and they have won the most non-quota seats. In Erbil three out of 20 women work and they occupy the second spot for non-quota seats.  In Duhok, where only two out of 20 women are in the labour force,  most female MPs were seated through the quota system.

Rozhan Shahid Hama Rash, a 37 years old MP from Sulaymaniyah said she ran on her reputation as a professional. She is also the daughter of Hama Rash, one of the famous martyrs in Kurdistan, ran for parliament  and won without relying on the women’s quota. She said that her professional reputation was key to her success in the election. Hama Rash said, “I was a successful lawyer and then I became responsible for the department of law and human rights in the security directorate of Sleman International Airport.” She added, “Because I had a good reputation in that job, I was able to win the election later.” 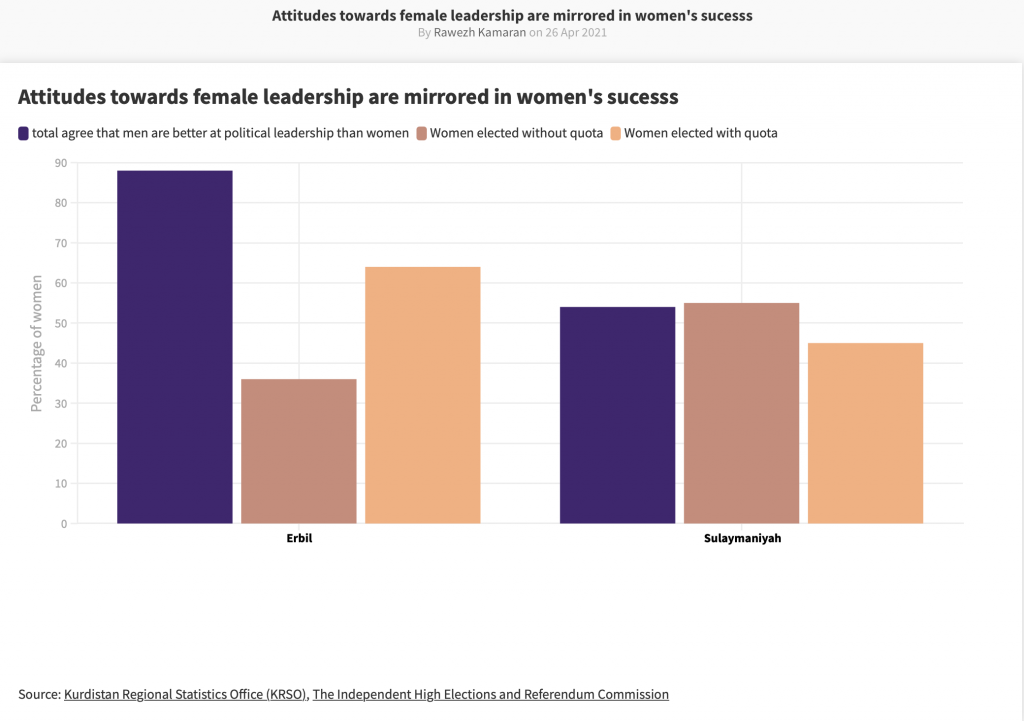 Where men are regarded as much better leaders, women rely on the quote system

Attitudes towards female leadership are also mirrored in women’s success in the polls. In Erbil, 18 out of 20 people believe that men are better at political leadership than women, while in Sulaymaniyah province the rate is  lower with 15 out of every 20 people believing that men are better leaders. In any case, this is a tremendous barrier for elected women leaders to overcome.

Layla AbdulJabbar Hadw , a 37 years old PDK MP from Duhok was elected to parliament through the women’s quota system and believes the quota system is still crucial for combating gender stereotypes. Previously, she was on the leadership team of a Kurdistan women union which is a women’s organization affiliated with the PDK and witnessed all the barriers faced by women.  She  believes that the community’s view of the women’s participation in politics  is why the women’s quota is so important. “In developed and democratic countries, women have entered parliament as human beings with their own abilities, not only because they are women. But the fact is that in Kurdistan, our society does not believe in women’s advancement because of its culture,” she said. “That is why it is important that the women’s quota system is set to protect that right so that women can prove their abilities.”

Hadw believes  that it is important for women to do more to prove themselves and to put women’s issues and gender equality higher up in the political agenda and remind society that culture is fluid and that women used to hold much more prominent roles in Kurdish society. “There is still a long way to go before we can eliminate the women’s quota, we must do more to make the society accept women as human beings,” Hadw said. “Because in the past there were women among the Kurds who have led and ran large tribes.”

Prevailing prejudices against women in the workforce and in politics often go hand in hand and are reflected in women’s representation in parliament.  For example, women from Sulaymaniyah occupy over half of the 13 seats won by women outside of the quota system. Sulimaniyah is the place in Kurdistan where both the most women work and a larger share of the population  believes in women’s participation in politics.

HamaRash the PUK MP who got elected outside of the quota system, believes that the women’s quota still  is important for the development of women in Kurdistan. “We still have a duty to play our role as a women parliamentarian so that people’s trust in women becomes stronger, to make them  believe that we can satisfy their needs and aspirations,” she said. “That will make the way easier for women to go to parliament without a women’s quota.” 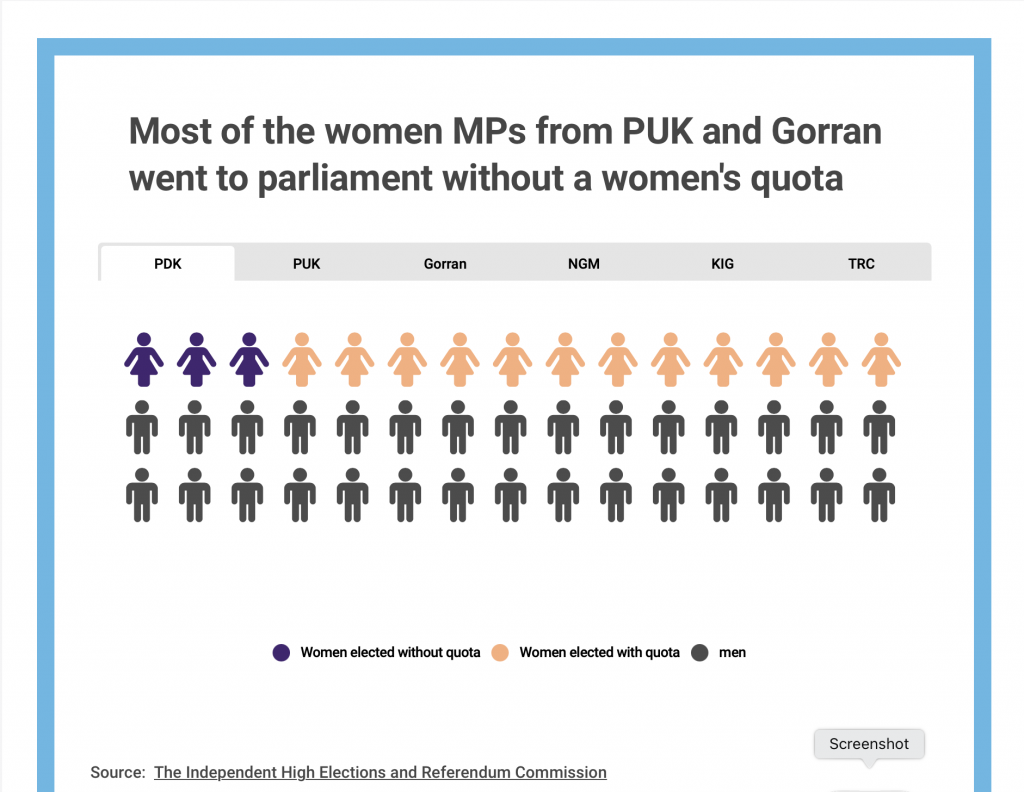 HamaRash, the PUK MP, said that the success of women in the party is deliberate. “It’s mentioned in our party’s program that women need to play an important role, so it is our party’s goal to bring women forward,” she explained. In addition, she said the party puts forward women candidates who are successful professionals either within the government or, the party or in the private sector so they can run on the strength of their professional reputations. She said that public trust has been key to getting elected outside the women’s quota.

Dr. Hataw Hama Salih, head of Gender Equity Center at  University of Halabja has studied the pros and cons of the gender quota system for years. She explained that  the women’s quota system was put in place to guarantee women’s rights in politics, but it is very important that simultaneously, to campaign for the public to cast ballots based on ability, not gender.

Hataw believes the women’s quota system also limits women’s potential once they are seated in parliament because of the stigma associated with entering through the quota system.  “When a woman goes to parliament with a quote, she doesn’t have enough confidence in herself because she didn’t win with their own vote,” she said. “In addition, voters often say women will win with a quota so they vote for men candidates.”

Women have attained high positions in parliament, but not influence 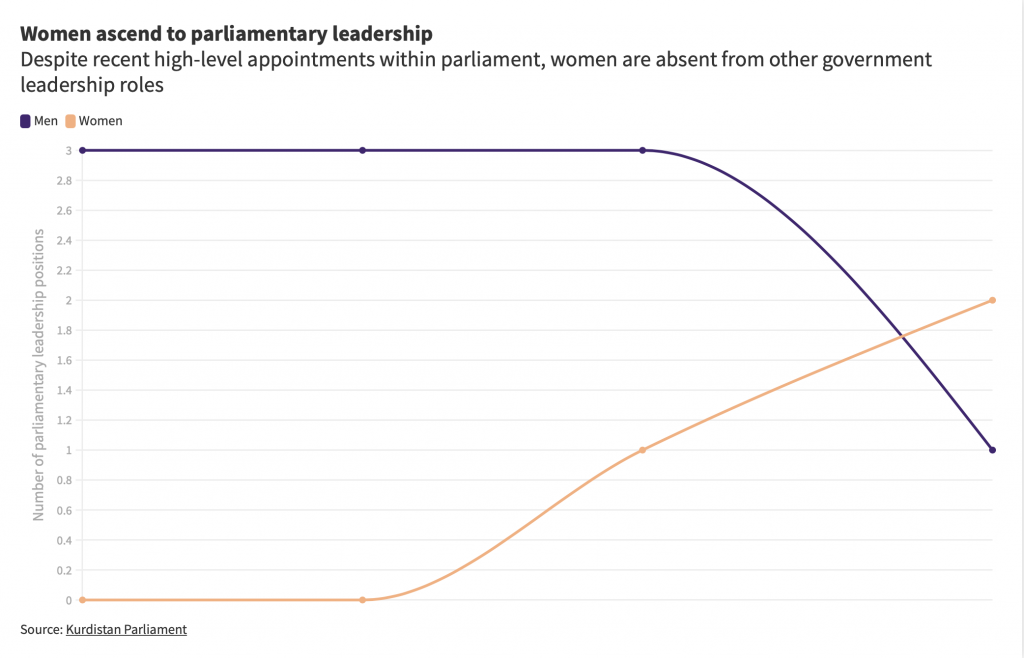 Getting elected is the first hurdle for many women and gaining actual influence over legislation is quite another. In the current Kurdish parliament, women occupy two out of three parliamentary presidency positions: Dr.Rewas Faiq Hussein, representing PUK, became the speaker and the post of secretary of the parliament is Muna Kahveci, a woman from Turkmen minority. In the previous four parliaments, only one woman was appointed to leadership.  Begard Dishad Shukrla, from the PUK,  served as parliamentary secretary for two years. Otherwise, from 1992 to 2018, women were entirely absent from the parliament presidency.

Although women have recently been able to win high positions in parliament, this trend has not carried over to the parties and the government. According to Tavga Raouf Aziz, a project manager at Heartland Alliance International, without women in leadership positions within parliament, their influence is limited.

Aziz coordinated Future Forward: The Iraqi Women’s Leadership Initiative, a program to promote women in politics and witnessed first hand the barriers women MP faced in influencing the legislative agenda. “Women’s quotas in parliament and provincial councils have given women a good opportunity to participate in politics, but in order for women to be able to prove themselves … there are some important steps that need to be taken,” she said. “We need to increase the number of women in the top positions of political parties because they are often the decision-making center from inside the parties.”

A glass ceiling still exists in many government bodies that may undermine female MP’s ability to influence their direction. According to Aziz, women must also be given an opportunity to influence specific sectors through ministerial leadership roles/ Aziz explained. She believes that women’s quotas should extend into government itself so that women leaders are able to prove their ability and gain the trust of the community.

Tavga has collected data to show that women have been locked out of key ministerial leadership roles. “There are only three women ministers out of a total of 19 ministries, with only one female minister in the previous cabinet, while in the ministries women make up a large number of the employees.”  For example, according to her data, over half of the employees at both the Ministry of Health and Ministry of Education are women, but those institutions are led mostly by men. In a ministry such as the Ministry of Peshmerga Affairs, about 99% of their employees  are men. Tavga believes that inclusion needs to extend to ministerial leadership in order to promote genuine gender equality in government.

Spotlighting the success of women in government

Many of the women we spoke with agree that women’s contributions will be limited unless the public recognizes their contributions. HamaRash explained that women’s professional accomplishments have been key to getting elected and by extension, women need the opportunity to shine in politics as well. “That’s why it is important that the high positions of the government and the party be given to women also,” she explained. “So that people see that women can manage those positions well in the same way as men.”

Tavga also believes that “society in general may have a role to play in shifting public attitudes towards women in government by ensuring that women’s achievements do not go unrecognized. She explained, “Art, cinema, media and civil organizations should play a continuous role in creating a beautiful and real picture of women in politics.”