On December 2, after several rounds of negotiations, Iraq’s federal government and the Kurdistan Regional Government (KRG) officially announced that they had reached an agreement on two definitive stumbling blocks that had soured relations between them: the share of the country’s oil wealth and the resumption of budget transfers to Erbil.

A closer look at the announced deal reveals that it is more a product of political expediency, that is, the pressing need for a government of national reconciliation in Iraq as desired by the US as well as a financial emergency represented by both Baghdad’s and KRG’s weakening financial reserves. The deal, in its formulation, puts a novel fiscal architecture in place by providing for an asymmetrical revenue-sharing system in Iraq, which rather than regulating relations has the likelihood to become the main dividing line between KRG and Baghdad in the future.

Baghdad has agreed to resume the budgetary installments —17% of the federal budget— to Erbil that were withheld since January 2014. On the other hand, with respect to the country’s oil share, the KRG has agreed to supply 550 000 barrels of oil per day to the central government, 250 000 bpd of which will come from the new oil fields in the Kurdish Region and the rest coming from the disputed Kirkuk oil fields —practically 100% of Kirkuk’s current production capacity. This part of the agreement conceals an important facet of KRG’s independent oil sales, that is, there is no explicit reference about the destiny of the remaining oil produced in Kurdistan that is not handed to SOMO, Iraq’s oil marketer. This remaining oil amounts to 150,000 bpd, as Kurdistan oil fields currently produce nearly 400,000 bpd. Therefore, Baghdad has seemingly, not neglectfully, adopted a passive attitude towards KRG’s policy of independently selling and taking full receipts of the remaining 150,000 bpd through their own oil marketer, KOMO. However, herein lies a destabilising factor for the whole of Iraq that can make the agreement ephemeral.

Confronting visions of a federal Iraq

The deal drives Iraq towards the type of federalist architecture that the KRG has been envisaging —although not particularly shared by Baghdad. It is an architecture that practically guarantees financial independence for the region inside Iraq. In the MERI Forum 2014 held in early November, both the Deputy Prime Minister of KRG, Qubad Talabani, and the Minister of Natural Resources, Ashty Hawrami, expressed such vision. Both leaders argued for a decentralised state, in which Kurdistan —but also every governorate in practice— still contributes to fund the federal government but, in essence, also manages their own natural resources and economic assets. This vision contrasts with the current functioning of Iraq, which has failed to perform as a federal state although it was established as such, according to the 2005 Constitution. Fiscally and administratively, Iraq is still in practice heavily centralised. 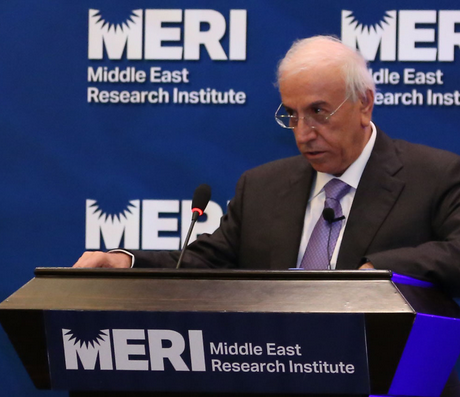 Dr. Ashty Hawrami, at the MERI Forum 2014 in the session about ‘Baghdad-KRG relations: between independence and inter-dependence’. Photo credit: MERI.

Since any public policy in Iraq is fully dependent on oil revenues, political skirmishes on whether “the oil of Iraq belongs to all Iraqis”, as incessantly claimed by politicians in central and southern governorates, will become more contentious. In first place, Iraq’s revenue-sharing system, after the recent agreement, resembles an asymmetric one, with one region having reached a deal that grants it more autonomy over its resources than the others. As a result, some governorates are likely to claim the same rights from the federal government, contributing to further friction and political instability. On the other hand, certain factions in Baghdad will keep pushing for re-centralisation, so that KRG hands all its oil back to SOMO.

Second, the oil resources of Kurdistan are still vastly untapped and thus there is a huge margin to increase oil production in the region. KRG’s Ministry of Natural Resources has frequently vowed to reach the production level of 700,000 bpd during 2015 and 1 million bpd by the end of next year. Any additional production of oil from new fields beyond the 250,000 bpd handed to SOMO will be in the hands of the KRG. At the end of the year, this production represents a lot of financial resources at stake that would not flow to Baghdad but would remain in the Kurdistan region, according to the implicit fiscal rules set in the deal.

This contentious element gains further significance in the current context of falling oil prices. In effect, the deal guarantees that the budget transfers to Erbil will resume in January 2015. However, while the previous budgets in Iraq were planned by taking into consideration an oil price of 100 USD/barrel, the 2015 budget is likely to use a benchmark price of between 60 and 70 USD/barrel. Thus, the amount of money transferred to all governorates, including KRG, will be around 30% less. The KRG is likely to overcome this shock by compensating any decrease of monthly revenue by increasing their own independent oil exports.

The agreement as a way to deepen federalism?

As far as the present deal is concerned, there will still be the need to further agree on the revenue-sharing system in Iraq, since other governorates that see their budget shrink —due to falling prices of oil— are likely to claim the same treatment from Baghdad as agreed with the KRG. It seems reasonable to conclude that the Baghdad-Erbil deal is weak. As KRG’s oil production rises over the course of the coming months contributing to revenues independent of Baghdad, voices in Baghdad may well increase pressure on the federal government not to adhere to the deal and block the budget until the KRG complies. However, if and when that transpires, the KRG may be tempted to say that they can take care of their own financial affairs without any dependence on Iraq.