Recovery in Nineveh: Visions and Obstacles

The event was designed to bring together policymakers, including members of the Nineveh Provincial Council, minority representatives, other key stakeholders in Nineveh, and a high-level delegation from USIP, in order to discuss visions and plans for recovery in the province in addition to obstacles which will have to be overcome in the process.

Yaffe provided an overview of the organisation’s evolution and development, having been founded in 1984 in order to provide an independent space within the US government to “promote studies of conflict and conflict resolution”. Driven by a desire to prevent another conflict after the two world wars, USIP originally focused on offering scholarships for conflict studies. The organisation now functions as a “think and do tank” which operates throughout the world to mitigate conflict.

Osama Gharizi, Regional Program Manager for Middle East programs at USIP, expanded on the organisation’s combined top-down and bottom-up approach to address the drivers and tensions and conflict. In terms of Iraq and the KRI today, USIP’s main priorities are to prevent revenge acts of violence and to remove barriers of return for displaced communities, which they have been working on in areas including Tikrit, Hawija, and Nineveh.

Presentations by two further speakers served to frame the discussion in terms of critical issues to address. Justice, and its significance for minorities, was the focus of the presentation by Dave van Zoonen, MERI Research Fellow. van Zoonen outlined findings from MERI’s study with USIP on perceptions of reconciliation by minority groups in Iraq, including Yezidis, Christians, Shabaks, Turkmen, and Sabean-Mandaeans. Retributive, restorative and social justice mechanisms were found to be important in different ways to different minority groups, and were suggested to all have a role in the recovery process. van Zoonen argued that establishing new social norms and minority participation in the national debate, further to more traditional punishment and restorative provisions, are needed to ensure an appropriate justice response moving forward.

Haider Al-Ibrahimi, SANAD for Peacebuilding, gave an overview of the efforts of his organisation to create a “culture of dialogue” among NGOs and address reconciliation at a local level. Al-Ibrahimi paved the way for further discussion by suggesting that “we are in need of a different mindset when we talk about Nineveh”, underlining the need to identify gaps in provision and create unanimous agreement among stakeholders. Among the issues he highlighted were security, obstacles of return for minorities including Yezidis, a need for trust building between citizens and security providers, and compensation. Without addressing these, he argued that there is the potential for another terrorist organisation to emerge.

One of the central problems needing to be addressed that was raised by attendees was IDPs and their return. Participants stressed the challenges involved in this process but also in ensuring that the IDPs had something to return to. For example, Sail Al-Omari, Assistant to the Governor for Planning and Reconstruction, noted that many individuals had lost their properties, belongings and their legal documents, making the entire return process more difficult. Thus, the need to rebuild infrastructure, among other issues, was considered to be vital in ensuring that the return process takes place, as well as in its own right.

Other issues addressed included ensuring compensation and justice for the victims of Islamic State (IS). Dealing with the needs of Yezidi women who were victims of IS was suggested to be vital by Khider Domle, civil society activist, among others. He suggested that although the names and identities of many of the perpetrators of these crimes are known, few people are captured. Governor of Shingal, Mahma Khalil, asserted that groups such as Yezidis had paid a “humanitarian tax” for their identity and that they should be listened to, whilst advocating for Shingal to become one of the governorates of Iraq. Recognising what had happened to Yezidis as genocide was also argued by Mahma Khlail. 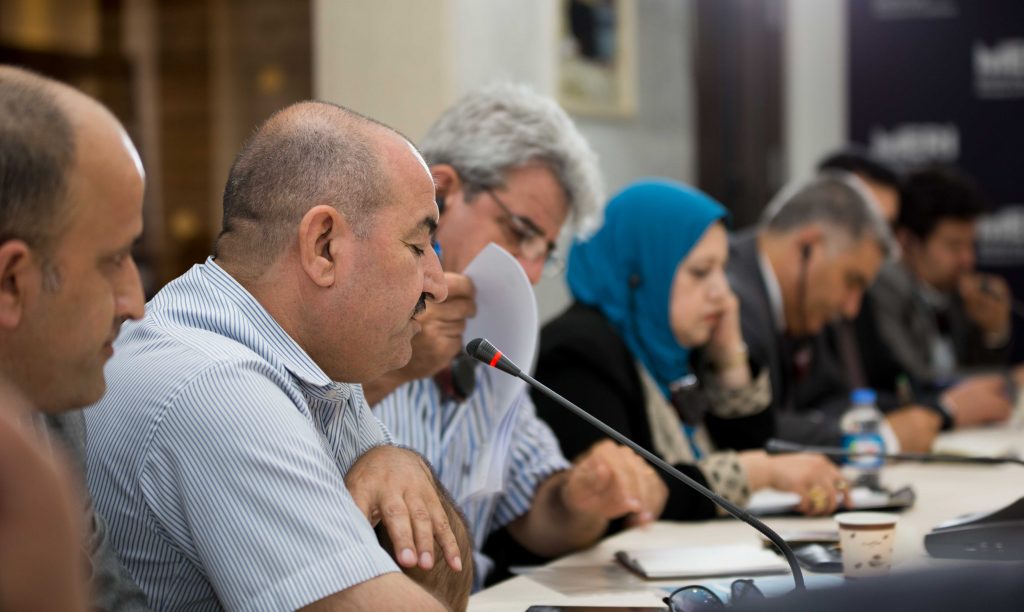 Reconciliation between communities, including minority groups, was deemed of paramount importance. Sail Al-Omari, Deputy to the Governor for Planning and Reconstruction, raised the question of whether social or political reconciliation needs to come first, arguing that social reconciliation cannot be done without a political will, an absence of political will also having been raised by other participants. A number of attendees also underscored the need to build trust between citizens, the government, security forces and the judiciary. These points echo those that van Zoonen made in his presentation, minority groups do not wish to reestablish the situation that was in place before IS in which there was a perceived lack of social justice.

Participants also discussed whether the borders would remain the same post-IS and whether the governance system would be reformed. The politically divided situation, both between Erbil and Baghdad and internally within Erbil was emphasised and the continuing role of security forces in Mosul, including Hashd al-Shaabi, was raised as requiring resolution.

In terms of a vision for the Nineveh recovery process, Nooraldin Qablan, the Deputy Chairman of the Provincial Council of Nineveh, articulated their five year plan for recovery which provides a general framework for the issues discussed by the speakers including stability, IDP return and reconstruction. Qablan highlighted some of the main achievements so far, including 80% of the left side of Mosul city having regained electricity and 29,000 students having returned to school. Furthermore, he outlined efforts to undermine the ideology of IS through workshops; the creation of 34 committees with a range of specialisations; a network of women organisations that had been formed; efforts to activate courts; and a budget allocated to support Yezidi women, and their families, who had been kidnapped by IS.

Some participants questioned the coherence of the plan for Nineveh’s recovery, arguing that each actor “comes up with their own plan or shopping list”. The importance of clear mechanisms of implementation and a “common spirit” moving forward was emphasised. It was also iterated that regional influence from players such as Turkey and Iran should be acknowledged in any plan in order for it to be realistic.

Participants concurred that recovery in Nineveh is a long process. Liyal Mohammed, a member of Nineveh Provincial Council highlighted that areas such as Tal Afar have not yet been liberated and therefore there is some way to go.  However, by sharing their ideas and strategies, the meeting aimed at creating a more united approach between stakeholders towards the recovery process.

The first half of the event was livestreamed and can be found at the following link: