Post-Crises Prospects for Reconciliation in Iraq: A Kurdish-Shi’ite Debate in Najaf

With the military defeat of Islamic State (IS) militants in Mosul and other Iraqi territories, the Government of Iraq (GoI) is moving ahead with plans to stabilize violent environments, rebuild war-ravaged physical infrastructure, and restore vital services. Equally important is the need for developing a feasible national reconciliation strategy among the country’s various ethnic, religious, and social groups, through dialogue and trust-building mechanisms.

In light of warm historical relations and significant political influence between Iraqi Kurds and Shi’ites, reconciliation  between them is of paramount importance for lasting stability in the country. Indeed, in the absence of Erbil-Baghdad rapprochement, overcoming future political challenges will be very difficult. Towards that end, the Middle East Research Institute (MERI) and Al-Rafidain Centre for Dialogue (RCD) jointly organized a series of unofficial meetings involving representatives of Shi’ite political parties and a MERI-led Kurdish delegation between 28 February and 01 March 2018.

Religious leaders, academics, political party representatives, members of parliament from the Kurdistan Region of Iraq (KRI), Baghdad and Najaf attended the meetings, organized under the themes of  “The Future of Governance in Iraq: Crises and Partnership Opportunities” and “The Role of Decision-makers and Political Elites in Building Confidence Among the Components of Iraqi Society.” The MERI-led delegation also visited the Marja’iya (Shi’ite religious authority) in al-Najaf city.

The Kurds and Shi’ites have more to unite than divide them, including a shared history of struggle against Saddam Hussein’s dictatorship. “There are many Shi’ite leaders who were with us in the trenches and mountains of Kurdistan. We have even shared prison cells with them,” said Sa’di Ahmed Pera, member of the political bureau of the Patriotic Union of Kurdistan (PUK). He added that this historical struggle has often been referenced “to overcome differences, and we should not shy away from that legacy.”

With the fall of Saddam Hussein’s regime in 2003, Shi’ites and Kurds forged a natural alliance in the stride toward democratic governance. “Kurds and Shi’ites took on leading roles in building the new Iraq,” noted Ja’far Eminki, deputy speaker of the Kurdistan-Iraq Parliament. This includes working together to adopt the permanent Iraq Constitution in 2005. Certainly, Kurdish voters from the swing governorate of Nineveh provided the critical votes to pass the Constitution. Without these votes, the Sunni “No” campaigners—who secured al-Anbar and Salahadin governorates–could have prevented the Constitution from being adopted according to Iraq’s electoral rules stipulating that a “No” vote by the majority of voters in three governorates would render the Constitution null and void.

In the post-Saddam era, the Kurds’ connection to Iraq rose. “The Kurds have never felt as Iraqis as in post-2003 era when they partnered with the Shi’ites to form the new system in Iraq,” stated Arafat Karam, member of the Iraqi parliament representing the Kurdistan Democratic Party (KDP). “Under the Shi’ite rule, and for the first time since 1992, Kurds felt as Iraqis,” added Karam. In short, Kurds have, since 2003, become major contributors to the decision-making process in Baghdad, as they, along with the Shi’ites, held several powerful executive and ministerial posts throughout all levels of state bureaucracy.

But the decades-long alliance between Iraqi Kurds and Shi’ites was thrown into doubt when relations began to deteriorate between the government of former Prime Minister Nouri al-Maliki and the KRG in 2014, mainly over an oil dispute, resulting in the freezing of the KRG’s share of national budget. Then in 2017, Kurdish-Shi’ite relations further eroded following the Kurdistan Referendum for Independence on 25 September 2017.

Kurdish policymakers claim that Baghdad’s very policies toward the Kurds kindled urges to hold the independence referendum to begin with. “The referendum was a reaction to Baghdad’s bad treatment of Kurds,” said Sa’di Pera. Importantly, “it was not meant to change the status quo, redraw borders, or create realities on the ground,” but rather as a “procedure to ask people about what they want for their future,” added Pera. And yet, Shi’ite policymakers object to this narrative, counter-claiming that the Kurds have been actively working on their independence project since 2005.

Notwithstanding the KRGs intent, the Iraqi government of Prime Minister Haider al-Abadi strongly stood against it, citing its unconstitutionality and potential to further weaken the Iraqi state. The Marja’iya also opposed it. As a result, Baghdad moved to impose a host of punitive measures against the KRG, such as closing  KRI airports to international flights and resuming control over disputed territories, including oil-rich Kirkuk.

But it is not fair to blame one side and not the other for fractured relations. Rather, it is the result of “politicians on both sides not doing their jobs properly, and we need to learn from the mistakes and turn a new page, lest we will face more problems in the future,” said Hadi Ali, president of the political bureau of the Kurdistan Islamic Union (KIU). “Iraq is at its weakest point because of internal governing issues which caused its territorial integrity and unity of its people to be threatened,” Hadi added. These weaknesses have also made the state very vulnerable to foreign interferences.  Mr. Mahmood Raza, MP from Gorran Movement, also stressed that many Kurds prefer a democratic and law-abiding Iraq to an undemocratic Kurdistan . 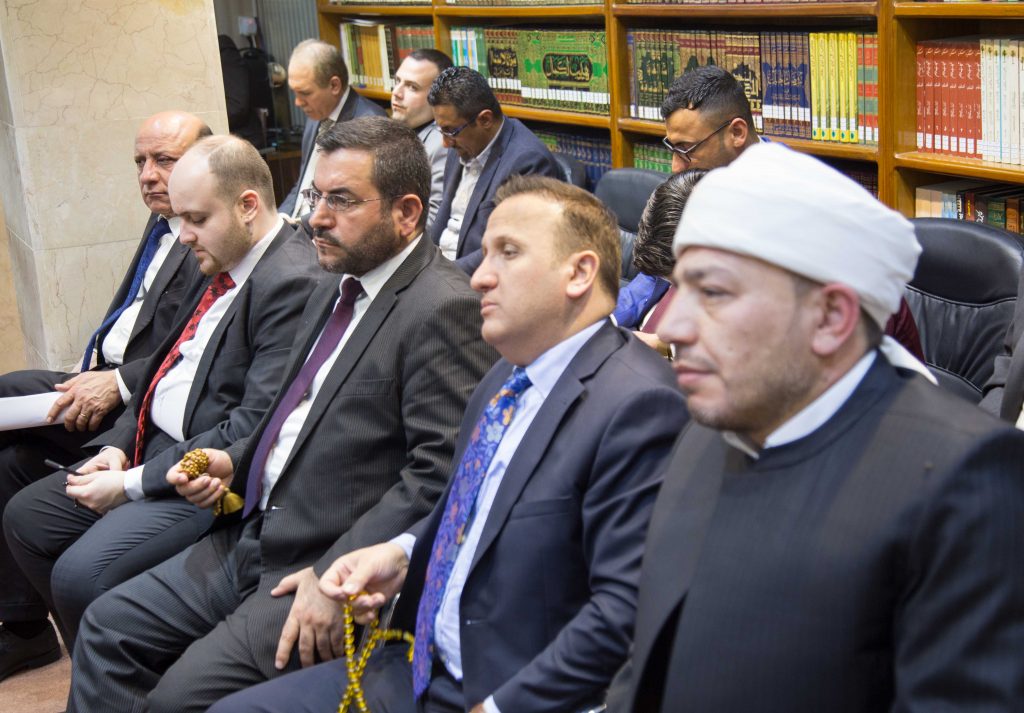 Reconciling Differences and Learning From the Past

Iraq’s diverse communities have and can again coexist by reversing the trends of conflict. By helping the Iraqi people become resilient through, among other things, engaging in reconciliation and developing a robust economy, Iraqi policymakers can ensure lasting stability, peace and prosperity. Without reconciliation, for example, the defeat of the IS could be short-lived and vital Shi’ite-Kurd victories in liberating Mosul, Kirkuk, and surrounding areas could be forgotten.

One metric of success for reconciliation is getting relevant actors to sit around one table and discuss contentious issues openly and without fear of retribution. Indeed, throughout the meetings in al-Najaf city, Shi’ite and Kurdish policymakers laid out their visions for the future, advancing the notion that a stable democracy based on the rule of law is the only way forward. They all agree that if the Iraqi state were strong, it would not have fallen to terrorist groups, resulting in mass suffering and loss of life, a crushing economic crisis, and widespread destruction to public and private property.

And here lies the need for a robust path forward. “We have come here to reduce tensions and prepare the grounds for meaningful dialogue,” said Sa’di Pera. Serious and candid dialogue is, thus, key to solving lingering grievances between Baghdad and Erbil, in accordance with the Iraqi Constitution. “True that there are unresolved issues between the two sides which led to current debacle, we are responsible for solving them; we might differ on the process, but we will get there,” noted Ja’far al-Minki. Dialogue must be institutionalized with clear agendas and mechanisms.

There is a historical opportunity to build a new and inclusive government in Iraq. It is in no one’s interests to remain in a state of constant crisis. All ethno-sectarian groups are responsible for the success or failure of governance in Baghdad, including the Kurds who are part of the ruling elite since 2003. Both Baghdad and Erbil must learn from the past and invest more heavily in strengthening Iraq’s political institutions in both capitals. The two groups should reconcile differences while they are small and manageable and not wait until it is too late.

Seeking partnership should take priority, since its absence has led to grievances and fractures among Iraq’s various governing groups. Kurds, for example, want to be treated as equals in the political process, not as mere participants. “The problem nowadays is that the existing mentality in Baghdad doesn’t believe in partnership; the Kurds were told to abide by their responsibilities, but not by their rights; the Iraqi government acts based on the victor and the vanquished worldview,” said Hadi Ali. Baghdad, in this regard, needs to do its utmost to ease tensions with Erbil.

Among the Shi’ite leaders who took part in the roundtable included: Nassar al-Rubai, a leader of the Sadrist movement and former Minister of Labor and Social Welfare; Sami al-Askeri, leader in the State of Law coalition and advisor to Vice President Nouri al-Maliki; Adnan al-Zerfi, leader of the Iraqi Loyalty Movement within the Victory Alliance led by PM al-Abadi; and Ahmed al-Fatlawi, member of the political bureau of the National Wisdom Movement.  Unlike the earlier open seminar, the roundtable was conducted under Chatham House Rules, hence the quoted statements are not affiliated to a particular speaker.

The Shi’ite leaders stressed that, likewise, Erbil needs to address Baghdad’s concerns. “The Kurds need to accept the ruling of the Iraqi Supreme Court without being linguistically ambiguous” . They must also agree to concede some of KRG’s prerogatives to federal authorities. “Kurdistan operates as a state within a state…[and] if this is not changed, it would contribute to the overall weakening of government.”

Shi’ite policymakers also complained that the KRG reaps the benefits of belonging to Iraq while contribution little to it. For example, KRG receives 17% of Iraq’s total budget without having to transfer revenue payments to the federal treasury. In Addition, Erbil doesn’t send customs or oil export revenues to Baghdad while still exerting full control over borders with Turkey and Iran and international airports in Erbil and Sulimaniah.  Moreover, The KRG needs to do more to make Iraqis feel that Kurdistan is part of Iraq. “We don’t want Iraqis from the south or center of Iraq to feel as if they are not in Iraq when they visit Kurdistan. Kurds must also make clear their true intentions to gain independence or remain within a federal Iraq.” stated one of the participants.

In sum, it is the national duty of all policymakers from every ethno-sectarian stripe to advocate for the rights of Iraqis, irrespective of religious and ethnic affiliation or geographic concentration. However, before achieving that, policymakers need to familiarize themselves with the concerns of all Iraqi citizens, not just their own constituencies. This would require establishing a special committee that looks after the grievances and needs of all Iraqis across Iraq and propose solutions, as suggested by several Shi’te and Kurdish participants.

Finally, Dlawer Ala’Aldeen, President of MERI emphasised that it is high time “to exchange visions on how to implement the constitution in its entirity,  fill the legislation gaps and support judiciary independence. It is time to institutionalise Erbil-Baghdad relations on the basis of real power-sharing, and for Baghdad to devolve power to local governments who are best placed to solve their problems and ensure prosperity among their local communities”