The MERI report, “In the Best of Times and the Worst of Times: Addressing the Structural Weaknesses of Kurdistan Region’s Economy”, puts forward a set of proposals on priority reforms for the Kurdistan Region to strengthen its economic system.

After evaluating the effects of the fiscal crisis, Iraq’s conflict and the political impasse on the economy, the authors identify the key root causes in the economy that makes Kurdistan vulnerable. Finally, the report lays a set of policy options and recommendations that can form the base for Kurdistan’s economic reforms path. The report places priority on aspects aiming to reform the public administration and balance the budget, but there is specific emphasis on private sector development, as any long-term economic recovery must certainly entail a measure of diversification. 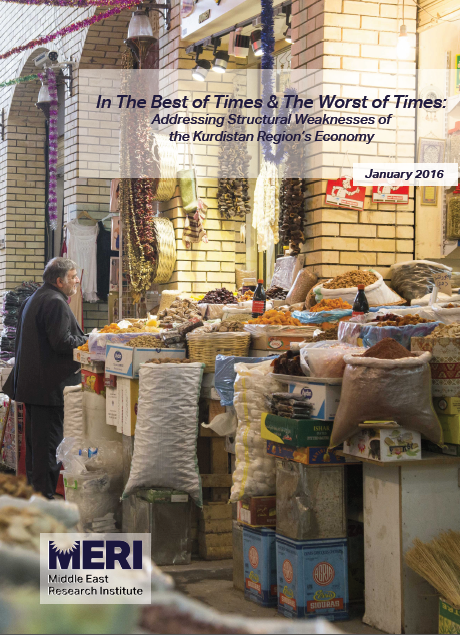 Although the crisis symptoms are directly attributable to the sudden shocks Kurdistan has experienced in the last few years, the severity of their effects is due to underlying structural weaknesses extant in the economy pre-crisis. Interviews with relevant stakeholders in Kurdistan, carried out by MERI, highlighted the major gaps in this region’s economic development, which are linked to unhealthy public sector finances, an underdeveloped non-oil private sector, a dysfunctional banking sector, and non-resilient public services provision.

The overarching message to take away from this is that the system was never prepared to buffer any kind of crisis. It has remained —and remains— vulnerable to internal and external shocks, despite the fact that because of its geopolitical position, Kurdistan is prone to regular shocks including fluctuations in oil prices, conflict, and/or political instability. In order to change course for the better then, the austerity measures the KRG implemented, as an immediate response to crisis symptoms, must be balanced with a wider and gradual agenda of reforms to build a more resilient system. Critical to this is the following pillars for reform:

In laying out the symptoms of the overall crisis, understanding their link to existing structural weaknesses in the economy, and proposing a set of recommendations on the way forward, we hope with this report to set the basis for broader discussion, debate, and more importantly, action to move Kurdistan in the direction of greater sustainability and prosperity for all its inhabitants.