Peace and Stability in Iraq

Months of civil unrest throughout Iraq have exposed the weakness and fragility of the federal government, pushing it to the brink of failure. Meanwhile, regional powers have overwhelmed the country’s decision-making process, exacerbating the administrative paralysis in Baghdad. In early January, a marked escalation in tensions between the U.S. and Iran further complicated these dynamics, and elucidated their profound impacts on national security, stability, and sovereignty.

To discuss these developments, the Middle East Research Institute (MERI) convened a roundtable entitled “Peace & Stability in Iraq” on the 29th of January, 2020. The event secured robust attendance from governmental and non-governmental organizations, international diplomats, members of regional and federal parliaments, and academics. The internal and external crises currently affecting Iraq, as well as the existential challenges those crises pose for its future as a sovereign country, were discussed. Participants also brainstormed possible policy solutions to ongoing conflict, and exchanged projections and potential scenarios for 2020.

Participants expressed resounding, universal support for the protesters engaging in nonviolent demonstrations across Iraq. While the increasing social fragmentation reflected by these protests is a source of concern and leaves Baghdad vulnerable to the opportunism of regional spoilers, widespread calls for reform and a progressive Iraq have highlighted a number of critical domestic issues in need of resolution. Protesters have advocated for economic revitalization; stabilization; legitimate, effective, and non-sectarian governance; free and inclusive elections; and strong, accountable institutions free of corruption.

While those gathered broadly recognized the value of these messages, there was little consensus on how Iraq should respond to the demands of protesters. Some emphasized that an early election is not the solution, as the major change in electoral mechanisms initiated by the December 2019 electoral law makes an imminent election unrealistic. Domestic crises might be better rectified, therefore, by working with the current government to implement the constitution. Others, however, noted the accretive failures of this government. They argued that, in light of Prime Minister Adel Abdul Mahdi’s resignation, the absence of an acceptable interim candidate and a fresh election could leave Iraq with a transient or care-taker government that is incapable of achieving stabilization or constraining the quasi-autonomous PMF. Some argued in favor of amending the constitution. Others insisted that this prospect is fraught with complexity, as those who might naturally be involved in the amendment process have sectarian orientations and agendas that could decrease democratic protections for Iraq’s diverse components. Doing nothing, meanwhile, increases the likelihood of further social fragmentation and civil unrest. 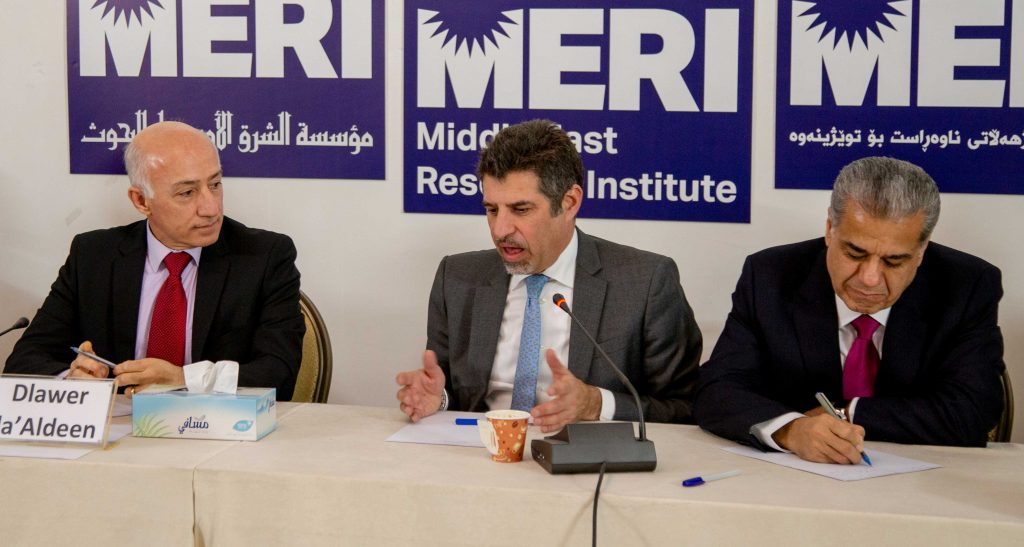 Tensions Between the US and Iran

In the interim, global power rivalries between the US and Iran have complicated the prospect of domestic stabilization, as Iraq has become a staging ground for foreign powers. While Iran and the US both disavow any interest in direct confrontation, reciprocal attacks and an ongoing “war of attrition” between the two entities have increased the potential for further escalation on Iraqi soil.

It is understandable, some argued, that Iraq would seek to maintain normative diplomatic and economic relations with Iran, given the historic cultural and geographic ties between the two countries. Unfortunately, there are paramilitary forces, openly loyal to Iran, acting as state-within-state entities, severely undermining the chance of the state regaining the monopoly on violence. These armed groups have also prevented successful reconstruction and stabilization efforts in areas retaken from the Islamic State (IS), disincentivizing the return of IDPs and increasing the risk of radicalization. Iran’s continued influence and activity within the country, via these proxies, is viewed as a considerable threat to the realization of strong, stable, and sovereign Iraq.

From the perspective of Tehran, the continued presence of the US in Iraq is a threat to Iranian interests in the region. Iran would like to see the withdrawal of US forces from Iraq, and is utilizing the tools at its disposal to influence the decision-making process and target US military holdings within the country. The US, on the other hand, has emphasized its commitment to Iraq but finds the Iraqi government’s failure to protect US facilities a cause for concern. 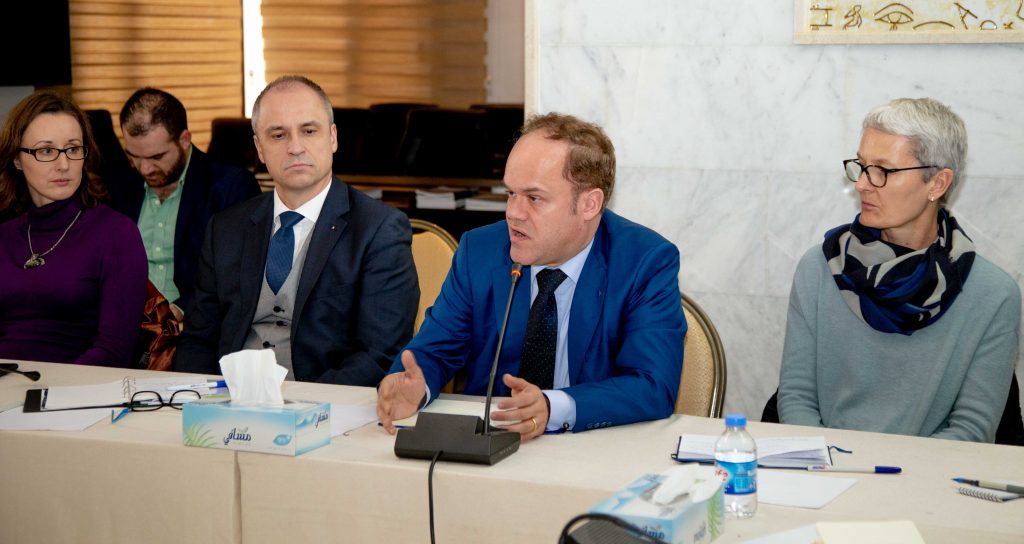 The Role of the International Community

In light of these challenging national and global dynamics, members of the international community were pressed to examine their role in securing Iraq’s future. International partners emphasized the interdependence of the global community, and argued that destabilization and stalled development within Iraq causes reverberations in other countries. “What happens in Iraq does not stay within Iraq’s borders,” one participant noted. In consequence, it is in the best interest of the global community to diffuse tensions, identify solutions, and ensure that stability, security, and development in Iraq can progress without significant impediment.

In the domestic context, this commitment means that international partners will continue to play a supportive role in stabilization efforts. Continued collaboration with the Iraqi government, however, is predicated upon formal invitation, constrained by existing mandates that emphasize Iraqi sovereignty and autonomy, and designed to facilitate local decision-making, investment, and ownership. In the broader geopolitical context, international partners have a role in moderating diplomacy in the region by issuing public calls for restraint from all parties and working behind the scenes to support de-escalation efforts at the senior level.

Members of the international community also called for entities in the region, specifically in the Gulf, to facilitate other multilateral negotiations, such as maritime and trade agreements, in order to bring key actors to the table and build habits of consensus that could initiate opportunities for more comprehensive discussions between the conflict parties. Some participants expressed concern, however, that there may be no viable alternative to the JPCOA except further escalation. Nevertheless, international partners emphasized that, even should their military commitments to the coalition become unsustainable, their diplomatic and humanitarian missions to Iraq will be maintained.

The complex matrix of domestic, regional, and international dynamics at play in Iraq has notable implications for the Kurdistan Region. Domestically, uncertainty about the future of the Iraqi government has caused widespread concern about the longevity of Baghdad’s constitutional, parliamentary, and budgetary commitments to the KRI.

From a broader geopolitical perspective, the KRI sees a continued need for international partners to remain in the region. Members of the international community have a role to play in preventing an IS resurgence; supporting democracy; rebuilding and strengthening Iraqi institutions; and assisting the KRG in its journey toward eradicating corruption and practicing greater transparency and self-sufficiency. Kurdish participants reminded their international colleagues that, while Kurdistan has long favored neutral, balanced, and conciliatory relationships, it supports the continued presence of US and coalition forces in the region. Should these forces withdraw from Iraq, the KRI and the rest of the country would be left vulnerable, particularly to an IS resurgence.

Thus, while members of the international community were quick to praise the “remarkable” security and stability of the KRI, Kurdish participants encouraged them to think critically about their obligation to support this region in light of recent developments. Kurdistan should not be forced to pay the price for the failures of the Iraqi authorities, they argued.

Throughout the discussion, members of the international community repeatedly expressed their desire to maintain their respective military, diplomatic, and humanitarian missions in Iraq. However, international efforts to stabilize this region are threatened by a lack of commensurate leadership and investment from Iraq in securing its own development, as well as the failure of the Iraqi state to address domestic threats to its territorial sovereignty. The onus is on the Iraqi government, therefore, to come up with solvent remedies for these issues. The Iraqi state must address corruption, commit to necessary reforms, and restore normal diplomatic relations with its neighbors by nurturing economic, cultural, and religious ties without compromising the sovereignty of its security and decision-making apparatuses.