MERI’s Roundtable on the Electoral System

As part of an ongoing project to promote good governance and democracy in the Kurdistan Region of Iraq (KRI) and to tackle the issue of the stalled political and parliamentary processes, the Middle East Research Institute (MERI) organised a special roundtable on Monday 6 March 2017 for political leaders to debate the reform of the electoral system.

The electoral system of the KRI has evolved over the past elections, but much of this evolution has been shaped by the local culture, history and power dynamics.  Experience has shown that the current system suffers major shortcomings that need to be addressed urgently. 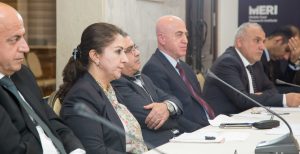 This is what was universally acknowledged by all attendants of this roundtable which included politicians and members of parliament from the following parties:

Also present were members of the Independent High Commission for Election and Referendum in the Kurdistan Region.

There were clear differences in points of view about which components should be modified and how.  The key components that attracted much of the discussion included:

It was left for the representatives of each political party to return to their parties and help form clear views about each aspect of the electoral system before future agreements can be facilitated.  It was also agreed that the local experts should be exposed to electoral systems and experiences of other democracies, particularly in Europe, before major changes are proposed for the KRI and a new electoral legislation (amendment) is adopted by the Parliament.

MERI has previously held a number of open debates for the political leaders, such as those held during the last two major annual conferences (MERI Forum 2015 and MERI Forum 2016), and for their parliamentarians, such as the recent workshop on 31 January 2017, in order to assist the parties in overcoming the current political and parliamentary deadlock.