MERI has continued its series of high level events with leading politicians and opinion-formers in the Kurdistan Region. In light of the current political situation, MERI’s latest event was held to discuss the KRG – Baghdad relationship. This meeting, conducted under Chatham House Rules, provided a forum for debate on the issues facing the current governmental negotiations.

Bringing together leading figures, strategies and priorities for the ongoing negotiations to form a government in Baghdad were identified. A number of these themes were analysed and debated. These topics ranged from the budget, Peshmerga wage bill and oil revenue; to the response to displaced people, Article 140 and the financial crisis. The aim of the debate was to provide detailed and precise recommendations on the approach to such topics. The meeting has resulted in the creation of a formal and specific policy document that will be disseminated to leading decision-makers and the team that will be negotiating with Baghdad. 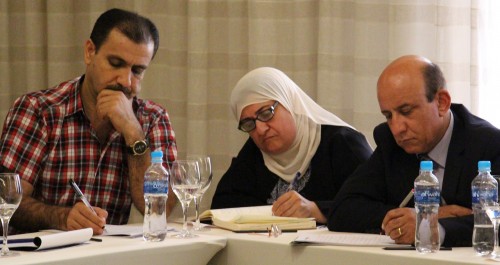 In the light of recent events, there was the attitude that Prime Minister designate Haider Al-Abadi, should be given a fresh opportunity to form a government. With the growing international support against the Islamic State, and the increasing military and financial pressure on the KRI, it was identified that the Kurds should engage with Baghdad during this government formation. Specific recommendations were made in regards to the negotiating team and the meeting identified what their major priorities should be.

It was largely agreed that the negotiations should be built upon mutual trust, with a clear contract between the two groups; resulting in a signed agreement. This should be conducted under the supervision of the international community with an adequate system of checks and balances that should be put in place.

The meeting was by invitation only, all MERI members were also invited to attend. All meetings of this format are held under “Chatham House Rules” to facilitate free and open debate on such sensitive issues. The policy report directed towards policy-makers and the negotiating team will be produced promptly, as to influence decision-making.

New project on mitigation policies for the refugee crisis
Turkey, Iraq and the Kurdistan Regional Government