Elections in Tunisia: Stability in an Unstable Middle East

Amidst all the chaos and mayhem afflicting the Middle East in recent months, a welcome development and a glimmer of hope for democracy and nation-building comes from Tunisia. Almost four years on since Mohamed Bouazizi set himself on fire in December 2010, causing national outrage not only in Tunisia but the wider region, it seems Tunisia is slowly settling down and stabilizing. It has not allowed itself to be blown away in the wave of religious radicalism plaguing the Middle East despite the fact that majority of ISIS fighters come from its territory.

After the ouster of Zine el-Abidine Ben Ali’s dictatorial regime, parliamentary elections in the post-Ben Ali period brought Ennahda, the moderate Islamist party, into power in October 2011. Ennahda won the majority due to its party discipline and popular slogan against corruption but as the party sat down to consolidate power, it became infamous for its corruption as well as vicitimisation of political opponents. The political assassination of two secular politicians in 2013 brought the government and the entire political process to a standstill. While, for a time, it seemed that Tunisia would go down the same route of political deadlock and stalemate bringing another dictatorial regime into power, Ennahda, rather surprisingly, decided to relent power after widespread demonstrations against its government. As the Ennahda government disbanded willfully, a non-partisan technocratic government under Mehdi Jomaa, as Prime Minister, took over in January 2014 tasked with drafting a new constitution as well as holding parliamentary and presidential elections.

The latest parliamentary elections in Tunisia were primarily between two main parties; the Islamist moderate, Ennahda and the secularist, Nidaa Tounnes (Call of Tunisia). Nidaa Tounnes was formed in 2012 and includes within its fold former government officials, left-wing politicians and secularists. On the eve of the elections, Rachid Ghannouchi, the founder and chairman of the Ennahda Party, published an opinion piece in Washington Post arguing that the example of Tunisia belies the argument that there is a contradiction between democracy and Islam. 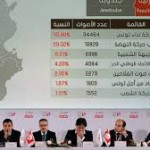 The final election result has put the secular Nidaa Tounnes in the lead with 85 seats in parliament with Ennahda securing 69 seats in the 217-member Assembly. As results started coming in, Ennahda conceded electoral defeat with one party leader stating that there were some irregularities, “but we consider we succeeded in this process to hold transparent democratic elections.” Ennahda has put its faith in a government of national unity and contended that Tunisia needs to consolidate democratic institutions. With both major political parties in conformity that Tunisia needs to move forward, the ability of political elites to compromise bodes well for the prospects of democracy in Tunisia.

Tunisian politics is based on a power-sharing formula which does not privilege different ethnic or religious groups or communities but interestingly accords power to political parties. Hence, previously, the President, Prime Minister and Speaker of Parliament belonged to the Republican Congress, Ennahda and Ettakatol. This system will continue in the future as Ennahda has announced that it will not contest elections for the President of Tunisia in November and has also endorsed the idea of a non-partisan President.

By all accounts, the new Tunisian government has to contend with socio-political problems including a radicalized unemployed youth, resuscitation of the fledgling economy and fighting corruption. The political elites have displayed a conviction to move Tunisia forward. The Arab Spring of people’s hopes and aspirations for freedom and democracy emanated from Tunisia. Will it also serve as the beacon light for states like Egypt, Syria, Iraq and Yemen to make successful democratic transitions remains to be seen?

The Middle East in turmoil: The need for dialogue and reconciliation
MERI Forum 2014 Impact & Feedback