The purpose of this debate with Prime Minister (PM) Masrour Barzani was to discuss the strategies, challenges and opportunities that the Kurdistan Regional Government (KRG) faces. The moderator, Amberin Zaman, focused her questions on the Cabinet’s agenda, internal KRI issues, Erbil-Baghdad relations and KRG’s relations with neighboring countries.

On the KRG’s agenda for reforms and eliminating corruption within the government institutions, PM Barzani said that they “were hit by COVID-19, and oil prices dropped, trade and business was really low and down, and of course we had other security challenges in the region. Despite all that we tried to tackle all the problems and do the reform”. He asserted that his Cabinet has made progress, executed many projects and already implemented some of the planned reforms in government expenditures.

The PM explained that Baghdad’s policies are partly to blame for causing the economic crisis in KRI, by cutting the KRI’s share of the budget and leaving the KRG with billions of Dollars in debt. According to PM Barzani, in 2020 and 2021 the central government “owes the employees of Kurdistan” the total of $3.1 billion.

In terms of privatisation and diversifying of the economy, the Prime Minister explained that his Cabinet has encouraged the private sector through many projects in the agricultural and tourism sectors. He referred to 147 projects that are funded and/or implemented by the KRG in the sectors of tourism, general industry, residential buildings, trade, agriculture, education, health, services, sport and art. For example, the KRG has encouraged farmers to invest in their small and medium size businesses in order to contribute to the KRI’s food security. He referred to the government’s initiatives in supporting the public and private sector projects for building the food infrastructure in all provinces. “In Erbil alone, receiving the wheat and also processing it, has [reached] the capacity of receiving 1.2 million tons”.

He added: “In terms of the private projects, we have given permission to 714 projects, which is estimated to be 965 billion dinars,….in all of the provinces in Kurdistan indiscriminately. That’s in paving roads, building roads, highways, and also for the municipality, for electricity,….building silos, education, residences, and also dams. About 1,108 kilometers of roads have been built and paved and renovated. About 4,056 units for the low-income people have been built. Twenty one projects of dams have been approved”.

Concerning the gas sector, he asserted that his Cabinet will increase the gas production as a source of energy, not only for the households in the KRI, but also to Iraq, Turkey and to Europe as well. He added: “My plan is to build petrochemicals, so that we can actually be clients and buyers of our own gas and natural resources, and then process it. That would be much more beneficial for the people of Kurdistan…. The excess gas and the natural resources that we have, we’ll be able to export it outside”.

Investing in waste management and environmental protection are also in the agenda of the KRG. The PM mentioned that the government is planning to invest in waste management in the KRI. He declared that “I asked the relevant ministries and the ministry of municipality to come up with a program and prepare a tender for the international companies to come and do the waste management”.

According to the PM, since this Cabinet started its work, corruption has been reduced a great deal, but not eliminated because fighting corruption is a long process. Despite the challenges, he stated, “I am very determined that we are going to insist on minimising corruption”.

On the security concerns in Iraq, PM Masrour Barzani said that “ISIS remains to be a main threat, to the security of not only Kurdistan and Iraq, but the region and the world. ISIS has not been completely defeated. They’ve lost territory, but they’re there. And they’re still able to recruit people, they’re still able to conduct operations against Iraqi security forces, against us in some cases, you’ve seen that there have been attacks against Peshmerga’s in some cases in specially the disputed territories”. He argued that if we want to eliminate ISIS and end terrorism in the region, the root causes of ISIS and terrorism have to be tackled, which include injustice, inequality, poverty and corruption. He stated that the KRG is ready to cooperate with the Federal Government of Iraq to fill the gap in the Disputed Territories and solve the root causes.

He added that the US support in the fight against ISIS is appreciated and he wished that the international coalition will further support Peshmerga and Iraq in the fight against ISIS because Iraq is still in need of international support. He also emphasised that the KRG is willing to have good relationship with its neighbouring countries. “We would like to normalise the situation, and of course with all of our friends. Our relations with the United States are not at the expense of our relationship with Iran or vice versa”.

On the Peshmerga reform, according to the PM, some steps have already been taken toward the unification of the 70 and 80 units into one Peshmerga army. There is already progress in terms of salary payment structure and uniting the overall structure of all Peshmergas.

On the last Iraqi elections, the PM said that usually political parties are either rewarded or punished, this is how people look at the performance of their representatives. The KDP won the majority of the votes in KRI and he added: “This is something that people have rewarded KDP for what they’ve done. And that is in several ways, because KDP was in the forefront of providing services to people, implementing projects as the head of the government”.

The PKK and KRG-Turkey relations were then debated. PM Masrour Barzani said that the KRG’s relationship with Turkey is ‘multifaceted’. He stated that the KRG has trade and joint security concerns with Turkey. According to him, the PKK’s presence in the KRI territories is “a sensitive issue to Iraq, is a violation of Iraqi sovereignty”. He added: “A foreign element coming into this country should not have been accepted to begin with. PKK did not come here as refugees, they came here and presented themselves as alternatives to the legitimate institutions that have been elected by people to run and govern this area”. He pointed out that the PKK presence is both a security threat and an economic problem for the KRI because as a result of the conflict on the Iraq-Turkey border, 800 villages in Kurdistan Region have been destroyed and the KRG cannot reach and provide services to those border areas where PKK reside. He believed that the PKK presence in the KRI provides Turkey a credible excuse for military intervention in those areas. He added: “It would be very difficult for Turkey to justify coming and chasing this organization. So, the PKK could have really done all of us a favor, to have left and not given any reason, not to us, not to Turkey, for the ongoing conflicts in this area”.

On the Sinjar agreement between the KRG and the Federal Government of Iraq, the PM believes that all the current elements that are not legal in Sinjar have to leave the area and then “[both federal government and KRG] would be deciding on giving the security to the locals. So the Iraqi Army and Peshmerga are going to handle some areas that are outside the residential urban areas, and then the security of the city and the urban areas would be given to the locals”. He also suggested that the Sinjar agreement has not been implemented due to the presence of PKK, affiliated groups to PKK and some outlawed groups in the area. He believed that if the agreement is implemented, it could become “a gateway to the rest of the disputed territories. [The agreement] wasn’t implemented because elements controlling Sinjar were even challenging the Federal Government in Baghdad”. 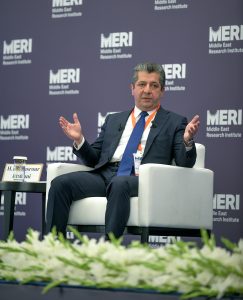 The KRG’s human rights record was discussed with PM Masrour Barzani. He asserted that his government fully supports freedom of speech and freedom of press in the KRI. Concerning journalists and activists who have been arrested in the KRI, he stated that “We have a judiciary system, our judicial system is very well respected, we cannot interfere in the decisions they make and every arrest of these people that you’ve mentioned, have been the decision by the court”. He also added that Kurdistan is safe and provides safety and security not only for the KRI citizens but for all the Iraqi citizens. He gave an example and stated that “you look at most of the activists and journalists around us, outside of Kurdistan, are coming to Kurdistan to feel safe. They are coming from other parts of the region; they are coming to Kurdistan. We are still hosting about one million IDPs, and many activists and journalists. And people of different faiths and groups, ethnic and religious groups, are feeling safe in Kurdistan. If Kurdistan was not respecting human rights, I bet you nobody would want to come to Kurdistan”.

On the formation of a new government in Baghdad, the PM said that the Kurdish political parties should have one agenda and unite their voices when negotiating with Baghdad. He added: “the KDP has started this initiative to approach all the parties to unite the Kurdish rules, so that they can go and negotiate with other components: with the Shiites, with the Sunnis, with others, for an inclusive government that can respect and implement the constitution”.