Chemicals are widely used in Iraq and the Kurdistan Region (KRI) for various civilian purposes. Terrorist organizations have demonstrated their intention, know-how and capacity to convert chemicals of civilian use to chemical weapons. Without an urgent and comprehensive policy response, the KRI can face significant breaches in chemical security with immeasurable risks to the population and the environment. This report follows a special MERI workshop on chemical security, where major challenges were identified and a number of policy recommendation made.

The people of Kurdistan are no strangers to chemical attacks. The most devastating chemical weapon (CW) attack against civilians in the modern history happened in the city of Halabja in 1988, killing more than 5000 civilians and injuring twice as many. The attack was part of a more extensive genocide campaign (Anfal Operations, 1987-1988) that resulted in numerous chemical attacks in various parts of Iraqi Kurdistan with incalculable human and environmental consequence. Chemical agents used by the Iraqi regime included the deadly mustard gas and nerve agents (Sarin, Tabun and VX) which have devastating short- and long-term effects among survivors.

Unfortunately, production and use of chemical weapons are relatively easy and the essential ingredients are readily accessible to terrorists, particularly in fragile and less institutionalised countries which do not have the appropriate policies or check and balances in place for the prevention of chemo-terrorism and protecting civilians.

There is considerable evidence that the so-called Islamic State (IS) and its predecessor, al-Qaida, have both used chemicals as a weapon of war. The Al-Qaida used chlorine (widely used in water purification) as a chemical weapon in 2007 against the US and coalition forces in Anbar province. The IS is believed to have stolen CW components from al-Muthanna project site, a 100 square kilometre complex located near Samarra, north of Baghdad. Al-Muthanna was the centre of Iraq’s CW program during the Iraq-Iran war and was known as the State Establishment for Pesticide Production (SEPP), a front company dedicated to the production of hundreds of tons of Sarin, VX, and mustard agents. The IS also converted a University of Mosul’s dormitory to a makeshift factory to produce CW, using publicly available chemical ingredients with expertise from former Iraqi CW scientists.

Subsequently, the IS used chlorine in an attack on a small town in the north of the capital Baghdad in September 2014. It also conducted a serious chemical attack on August 11th, 2015 against the Kurdish Peshmarga forces, injuring more than two dozen. Since then, IS conducted a total of 76 CW attacks, and more were planned before the liberation of Mosul.  The IS’s use of sulfur mustard was confirmed by the United Nations, which they may have been tested on prisoners. Similarly, thallium sulphate (rat poison) is also believed to have been used on prisoners.

The ability of IS to use chemicals as a weapon of war highlights the importance of chemical security in Iraq and beyond, knowing that the ingredients IS used in chemo-terrorism are widely used for agricultural, medical and other civilian purposes. With the recent increase in agricultural activities, there has been increased use of dual-use chemicals, such as pesticides, herbicides, insecticides fungicides, fertilizers and soil conditioners.  Health professionals and laboratory staff in Iraq face many challenges in improving laboratory safety and security.

Despite the clear and immediate danger of chemo-terrorism, there remain significant problems with chemical security in the Iraq. Some preliminary data from a CRDF-Global funded assessment of laboratories in the Kurdistan Region of Iraq (KRI) has shown gross shortcomings in practices involving chemical security and safe management of hazardous chemicals.

To address these issues and advocate appropriate management of chemical security in the KRI, the Middle East Research Institute (MERI) organised a workshop on this topic, in partnership with CRDF Global. The workshop was conducted over three days (April 1-4, 2019) and attended by 35 participants, representing chemical vendors and distributors, academics and civil society organisations. Two international subject matter experts delivered lectures and were assisted by two local trainers. The workshop uncovered major gaps in the KRI’s chemical security that require addressing as a matter of urgency. These include:

a. Limited knowledge and awareness:

Government policy makers, farmers and other end users of dual-use chemicals have limited awareness of the grave risks of poor chemical security, and do not have the right preventative instructions at their disposal to control access or use of these chemicals. Targeting academia, agriculture and distributors in any awareness campaign is deemed highly important. Furthermore, security forces that are responsible for chemical security lack adequate knowledge, awareness or capacity that are needed to undertake their job properly.

Several areas of weakness were highlighted in the KRG’s regulatory and monitoring functions. The KRI lacks appropriate legislations, regulations and guidelines that are desperately needed for enhance chemical security.  While the private market for trading dual-use chemical components is expanding rapidly, the administrative capacity of the government is inadequate for enforcing technical standards or control imports.  Not all chemicals are searched for, or tested, at the point of entry to the KRI. Appropriate transportation and storage facilities are not in place and return processes for chemical compounds at risk of degradation or expiration are not adequately addressed. Disposal of chemical waste is a major problem with no precise mechanism or guidelines to manage dual purpose waste.

Currently, there are banned materials being traded in open market with little sign of policing. The KRG has recently established a committee composed of representatives from the security forces, ministry of agriculture, local government and other stakeholders. They visit markets (albeit infrequently) and report irregularities, however, due to lack funding and capacity, their work remains grossly inadequate.  Importantly, in the absence of robust

checks and balances, committees are also subject to influence, engagement in preferential treatments or turning a blind eye on the sale of chemicals of dual use.

Participants of the workshop identified poor coordination between legislative, executive and judicial branches of governance, or within the various government institutions, as a major barrier for enforcing and promoting chemical security in the KRI. Critically, there is hardly any direct communication or collaborative relationship between the KRG and the Government of Iraq (GoI). The latter has more experience and capacity for tackling chemical security, and recently issued a list of chemicals of dual use for stakeholders. Some participants believed that the GoI’s policies are probably too aggressive and have negatively affected free trade.

The lack of specialist organisations among the civil society organization is also a significant shortcoming in the KRI. In Baghdad, a ‘League’ or interest group, representing chemical distributors, has been established.  So far, they have had a positive impact and proved influential in bringing various stakeholders together to engage in a productive dialogue on chemical security in Iraq. 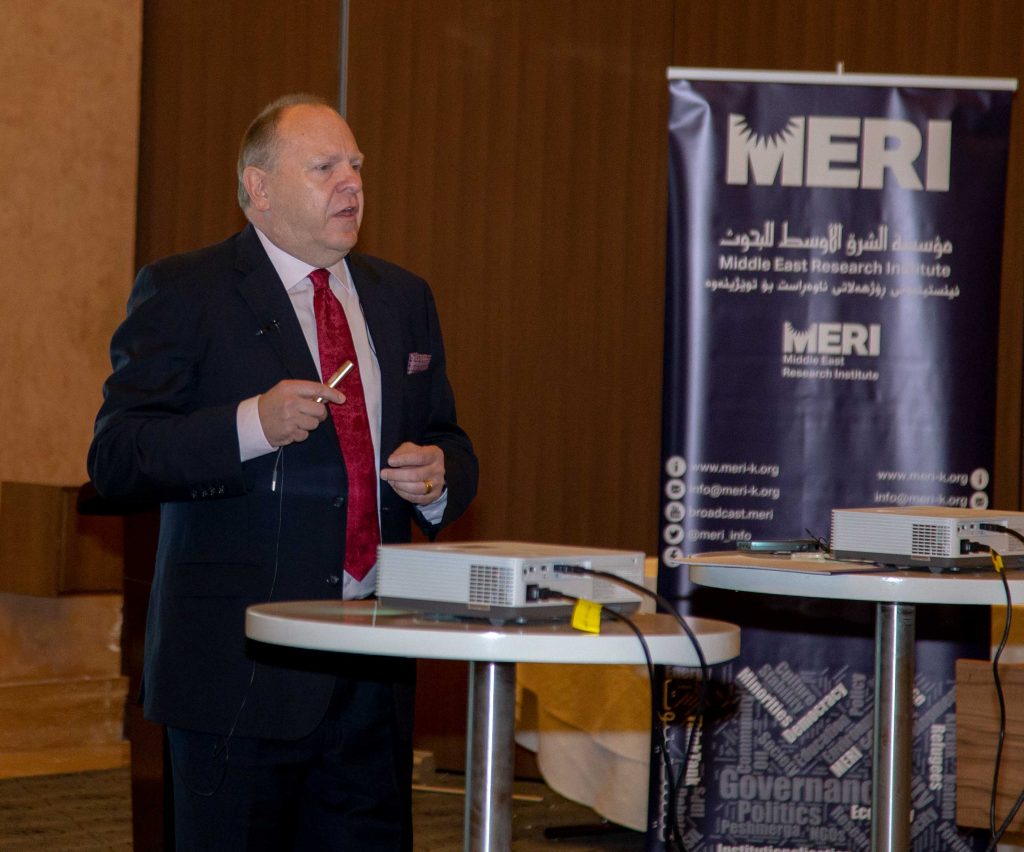 Policy- and decision-makers in the KRI must address the risk of chemo-terrorism by introducing robust mechanisms to prevent individuals and organizations from accessing and exploiting chemicals for terrorist purposes. Based on the debate at the MERI-CDRF workshop, a series of policy-recommendations were proposed:

Tackling chemical security is a complex undertaking that cannot be achieved without engaging various political, social and economic forces. It requires a comprehensive strategy for tackling the challenges of chemical security.  This strategy must be translated into legislations, regulations and mechanisms of action.

Engaging governmental and non-governmental (civil society) stakeholders, including the Parliament and relevant ministries, is required to influence policies and promote the introduction of chemical security measures in KRI.  Working with the stakeholders to introducing new checks and balances for a comprehensive chemical security management, including the import, manufacture, use and disposal of chemicals, with the ultimate focus on protecting people and the environment from all chemical hazards.

Advocacy can be in the form of initiating media campaigns, offering seminars and publishing research findings, including surveys and institutional assessments. Raising awareness is considered a top priority in any work related to chemical security in the KRI. It is important to educate all stakeholders about the need for adhering to international best practices and establishing regulatory control programs concerning hazardous chemicals, emphasizing dual-use chemicals.

Stakeholders should also abide by the International Code of Conduct on the Distribution and Use of Pesticides, and encourage minimization the use of pesticides through programs such as Integrated Pest Management. Cooperating with organizations such as the Food and Agriculture Organization and the World Health Organization to promote the regulatory capacities of KRG and the GoI in this area.

The workshop participants proposed the establishment of a KRI counterpart of the Al-Rafiden Association for Chemical Dealers, and together raise awareness for chemical hazards countrywide.

There is an urgent need for the establishment of national laboratories with the capacity to test and licence all imported chemicals at border control points to verify quality and quantity, and safeguard imported chemicals. Facilities to expedite chemical processing at ports of entry are needed.

Development of a database to audit the trail of all chemicals in and out of end-user’s facilities, and track chemical waste to ensure that no dual-use chemicals or CW precursors enter the public waste stream.

The views expressed in this publication are those of the author and do not necessarily represent the views of MERI.

Full references and footnotes are in the PDF version.

Iran-US tension and the Ghost of War
Institutionalisation of the Peshmerga: tipping the balance of Iraq’s stability