This report concerns the political and security situation in the district of Shingal after the summer of 2014. Specifically, it focuses on the Kurdistan Workers’ Party’s (PKK) presence in the area. In August 2014, the Peshmerga forces hastily withdrew from Shingal district due to the IS (Islamic State) advance. The Yazidi population of the district was then exposed to atrocities at the hands of IS. These events damaged trust between the Yazidi population and the KRG (Kurdistan Regional Government). The PKK entered the stage in Shingal district and aided Yazidis at the onset of IS’ advance. It capitalised on its image of being the saviour of Yazidis and promptly began to build governance and armed structures in the district. The area has thus become an arena of competition between the KRG (especially the Kurdistan Democratic Party– KDP) and Baghdad. PKK’s increasing presence challenges the KDP’s strong influence in the district. The ongoing power struggle in Shingal district also takes place against a background of wider regional competition.

The report utilises Zachariah Mampilly’s theoretical framework in order to analyse the effectiveness of rebel governance. It is argued that the model used for PKK-linked political and armed structures in Shingal district follows the PKK’s governance model as it is established in PKK’s leader Abdullah Öcalan’s ideological works and is currently in place in Rojava, run by PKK-affiliated actors. Furthermore, building upon Anna Arjona’s typology of rebel governments, it is asserted that the PKK-linked governance in Shingal district has become, since the summer of 2014, increasingly effective and entrenched despite certain shortcomings stemming mainly from lack of resources to satisfy all the needs of the population. Ultimately, the PKK-linked civilian governance structures represented by the Self-Administration Council and the armed structures of the Sinjar Protection Units find fertile ground among the Yazidi population for their project of self-administration and self-defence for Yazidis in Shingal district. The PKK-linked forces’ influence goes beyond a mere military presence and thus poses a new reality in which the PKK-linked forces are indeed actors which must be taken into consideration in future political arrangements in Shingal district.

While outlining the competing interests in the district of Shingal, the paper provides a set of recommendations to the PKK, the PKK-linked actors in the district, the KRG, the GoI, Turkey, and the US with an aim of promoting stabilisation and the well-being of the local population. The best case scenario would include at least partial demilitarisation of the situation in the district while shifting the competition for the population between the GoI, the PKK-linked forces and the KRG into a non-violent domain, instead focusing on trying to win the hearts and minds of the population. Competition within the scope of Iraqi law with an aim of generating as much genuine popular support as possible in the upcoming elections in Iraq is the way forward. In the long-term, the PKK-linked forces should engage in democratic electoral competition with the KRG and aim for integration into governance and administrative structures as per Iraqi law. Both sides could then work on improving their standing electorally. 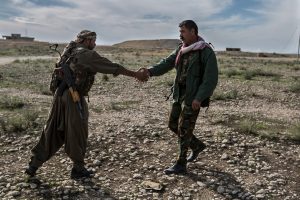 Assessing the Post-Disaster Needs in Agriculture Sector
Turkmen in Tal Afar: Perceptions of Reconciliation and Conflict