A Debate with the Prime Minister

Panel Eight: A Debate with the Prime Minister

At the outset of this panel, Dlawer Ala’Aldeen invited the Prime Minister (PM) to share his vision and strategy for his 4-year term in office. Ala’Aldeen observed that Masrour Barzani’s cabinet is a coalition of different political parties, and that the internal coordination demonstrated during its first four months has provided good reason for hope. He stated that observers acknowledge the PM’s former track record of success, and have high expectations for what he will be able to accomplish in office.

Ala’Aldeen asked the PM to elaborate on the pledges and commitments encapsulated within the 52-point manifesto of critical reforms adopted by the new KRG cabinet. He invited the PM to detail concrete action plans and systematic steps toward developing the educational system; improving the quality of health care; strengthening the economy; soliciting and coordinating foreign investments; protecting the environment; eradicating corruption; promoting institutionalization; increasing legislation; organizing taxation; facilitating decentralization; managing the political parties; and enhancing the partnership between Erbil and Baghdad. Ala’Aldeen specifically asked the PM to forecast the future trajectory of the KRG on each of these items.

Masrour Barzani began his first debate as PM by emphasizing his duty to serve citizens and build a government with people at its center, a responsibility he takes very seriously. He also expressed his hope that the new agenda will provide an opportunity for the political parties to unite in the service of their constituents. He stressed that, while the new agenda is extensive and involves many important projects, all reforms and changes will be based on scientific data. The ministers are responsible for collecting data and studying how to improve existing systems; current assessments, future projections, and critical interim decisions will be derived from this information.

“We will try to make the government a servant that satisfies the people, who are the center of the government.” – Masrour Barzani

Barzani observed that every society, in order to develop, must pay attention to its educational system and seek to improve it from the primary to the college level. The KRI still requires a lot of schools. 35,000 rooms and a normative number of teachers are necessary to achieve a standard education. The KRG has allocated a budget to reconstruct these schools, and has solicited additional support from the private sector in light of the financial crisis.

The KRG has also studied how to improve the health sector. Ala’Aldeen suggested that, together, the KRI’s government and its citizens are spending more per capita than in other countries, but are receiving lower quality medical care. As a result, people choose to go outside the KRI for health services. In response, Barzani explained the importance of exploring how hospitals and doctors can better serve society. Rectifying existing deficits in medical technology and improving the quality of available treatments are essential strategies for incentivizing medical tourism to Kurdistan and expanding these services to other locations. The Ministry of Health is discussing foreign investment and private sector partnerships to achieve these objectives. 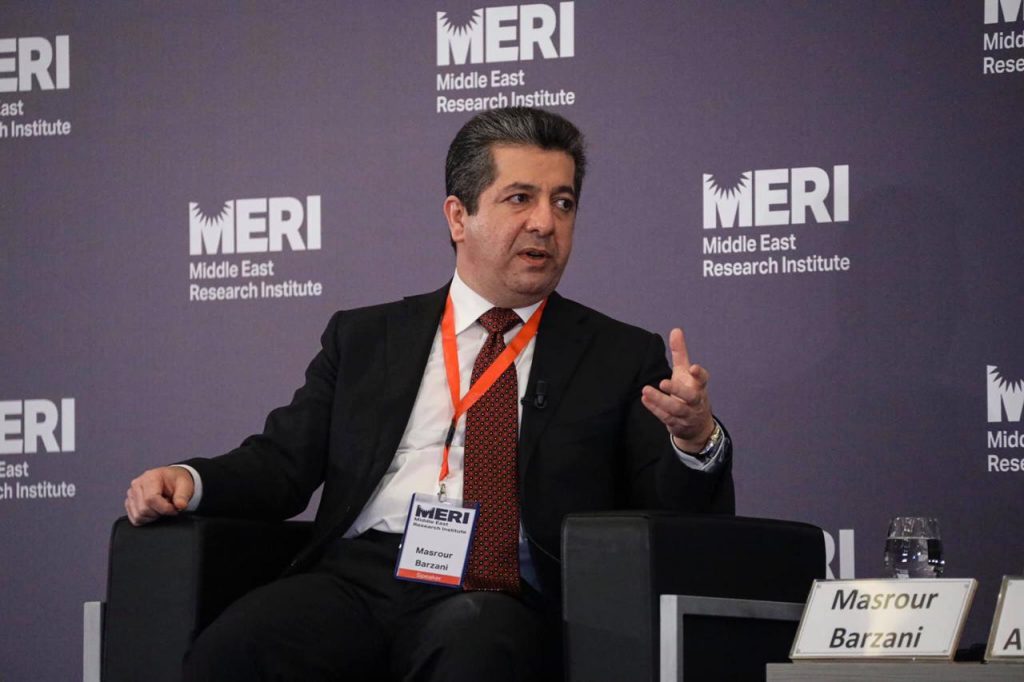 Barzani explained that multiple sectors – including education, health, and infrastructure – have suffered as a result of the economic policy governing exports. Outside of the oil industry, this policy fails to serve the KRI, as it increases dependency on imports and disincentivizes the development and exportation of local products. In order to strengthen the economy and bring business to Kurdistan, Barzani emphasized the need to solicit foreign and local investment, and to provide opportunities for both to work together. For this process to benefit the KRI, investments in public service projects should be prioritized, and foreign companies should provide jobs and professional development opportunities for local citizens.

Additionally, Barzani opined, financial sources should be diversified and taxes should be better organized. Large and small companies alike are required, according to international standards, to pay taxes where they operate. For both companies and individuals, taxation and representation must be understood as linked. If you pay taxes to the government, you have a voice in its operation. Barzani clarified that the intention of strengthening the taxation system is not to levy more taxes on those who cannot afford them, but to ensure that those who benefit from economic projects pay a proportional amount. This system will be organized scientifically, Barzani pledged. Ala’Aldeen, in response, urged for greater transparency in the taxation process, to allow citizens to see how their money is being allocated.

In his remarks on environmental protection, Barzani admitted that, while the KRG has a law in place to govern the compliance of big companies with environmental procedures and regulations, follow-up may be needed to ensure its implementation and enforcement. He stressed, however, that protecting the environment is the responsibility of all citizens. He encouraged listeners to demonstrate care and consideration for their shared home every time they go outside.

“Kurdistan is for all the people. It is their responsibility to protect their home for all who live in it.” – Masrour Barzani

Barzani also emphasized that the elimination of corruption is a central objective of his 4-year term in office. He reminded listeners that corruption registers at many different levels and takes many disparate forms. It is not always financial, for instance, but may be reflected in poor employee performance and time management. Barzani also noted that nepotism can play a role in employment, but emphasized that all government employees are equally responsible for serving the public. For corruption to be eradicated, he emphasized, its root causes must be addressed. In the interim, the KRG has taken numerous steps to control the spread of corruption by reviewing internal procedures, initiating financial and administrative reforms, soliciting advice from scientific experts and the Commission of Integrity, and considering the implementation of a facial monitoring apparatus. While the situation can be improved, Barzani cautioned against high expectations, noting that environmental factors have disrupted the attempts of previous cabinets to meaningfully address this issue. 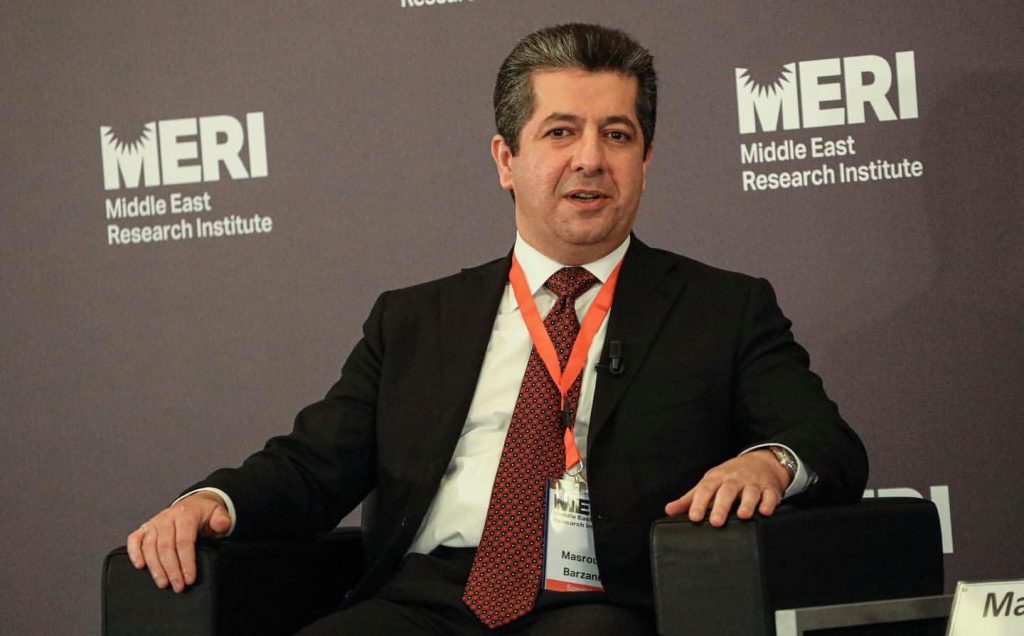 When pressed on the importance of adequate legislation to support institutionalization and decentralization, Barzani demurred, noting that a dearth in laws is not the central issue impeding that process. As per the constitution, he reminded listeners, laws issued in Iraq are sovereign and cover the whole country. Additionally, the KRG is capable of both passing and amending laws of its own. The KRG drafts some very good laws, he argued; the problem is that myriad existing laws have not been implemented effectively. When people in positions of authority fail to implement these laws, their corruption has a large impact at social and communal levels.

“The law should take the upper hand. There is no one above the law. We have good coordination with the Kurdistan Parliament and government, and we continue to work on that.” – Masrour Barzani

Barzani acknowledged that citizens have “paid a large price” under the KRG’s suffocating bureaucracy, and proposed a two-fold solution. First, he noted that bureaucracy must be reduced. Currently, for example, each administrative action has to be signed 20 times; the process must be accelerated to make it easier for people to do business with the government. Second, a long reform process is necessary to streamline the mandates of the various ministries, and ensure that they are staffed with experts. When everything is on track and organized, and a reliable system is in place to implement the governmental agenda, the prospect of decentralization from the ministerial level to Director Generals and managers becomes far more feasible.

When asked how the various political parties might challenge the implementation of these reforms, the PM emphasized the importance of understanding the relationship between the political parties and the government. Political parties, he explained, represent large populations and can participate in elections. After election results are announced, the winning parties have a unique opportunity to influence the direction of the new government by shaping its agenda. The government, in effect, becomes a tool for implementing the objectives of ruling parties; therefore, the primary responsibility for reform rests with those parties. However, any member of the populace may make suggestions, which can then be given to officials and passed along to the government. The KRG, Barzani reiterated, is responsible to the entire citizenry, and must serve the people in a non-partisan manner by providing for their needs. This includes those who have no party affiliation and those who abstain from voting.

Finally, the PM addressed the future of Erbil-Baghdad relations. He observed that the KRI’s relationship with Iraq is multidimensional, and emphasized that the stability of each influences the other. Thus, after its first meeting, his new cabinet prioritized a visit to Baghdad to demonstrate goodwill and offer suggestions for improvement. Barzani identified two main problem areas requiring further negotiations. The first is the administration of security within the Disputed Territories. In Kirkuk in particular, there has been a notable gap in security administration; only the Iraqi government stands in this gap, leaving a vacuum that terrorist groups can exploit. Cooperation, and a common command between the Iraqi Security Forces and the Peshmerga, is needed to rectify this. Constitutional remedies, through the implementation of Article 140, are required for long-term solutions.

The second problem area is the federal budget, particularly as it relates to oil and gas. Barzani explained that the KRI should have had 170,000 barrels of domestic allocation to fill its needs under 17% of the budget. However, these were never received and the KRI’s share of the federal budget was subsequently slashed to 12.6%. Only 5% of total Iraqi revenue is currently being given to the KRI. Barzani acknowledged a common misperception that the KRI is not supplying its share of oil; however, he reiterated that Baghdad is not allocating the appropriate budget. He claimed that Iraq’s federal debt is handled in a similar way. While Baghdad does not share its loans with the KRI, the KRI is expected to contribute to the eventual repayment of those loans. Iraq’s poor management of debt and oil affects the financial stability of the KRI and the salaries of its civil servants. It is not fair, Barzani argued, for the government’s demands to exceed its provision. Therefore, the people of Kurdistan have a right to know how Iraq’s oil is being sold and how its revenues are shared.

While the KRG has reached a mechanism to address these issues with the federal government, recent developments have complicated the prospect of progress. Barzani concluded his remarks by expressing grave concern over the protests in Iraq and the unnecessary loss of life. He emphasized that the KRG agrees with the demands of the people and feels that their rights are being violated, but contended that the cause and circumstances do not belong to Al-Mahdi, but are cumulative. He expressed his hope that a peaceful mechanism will be found to resolve these issues.